Rappler CEO convicted of cyberlibel but vows: ‘We will fight‘

Rappler's Maria Ressa and her former researcher Reynaldo Santos Jr. are the first journalists to be convicted of cyberlibel, in a landmark case that is seen to have implications on press freedom.
By: Nikka G. Valenzuela - Reporter / @NikkaINQ
Philippine Daily Inquirer / 04:55 AM June 16, 2020

MANILA, Philippines — Rappler CEO and executive editor Maria Ressa and former Rappler researcher Reynaldo Santos Jr. were convicted on Monday of cyberlibel in a landmark case that the former said was a “cautionary tale” to make the press afraid.

“I began as a reporter in 1986 and I have worked [in] so many countries around the world. I’ve been shot at and threatened, but never this kind of death by a thousand cuts,’’ Ressa told members of the media after the promulgation.

Manila Regional Trial Court Branch 46 Judge Rainelda Estacio-Montesa said in a decision that Ressa and Santos were guilty beyond a reasonable doubt.

The cyberlibel case stemmed from a 2012 investigative report written by Santos — “CJ using SUVs of ‘controversial’ businessmen” — which claimed that then Chief Justice Renato Corona while on impeachment trial used vehicles that were registered under the name of property developer Wilfredo Keng.

Based on an intelligence report, the story — published four months on the news website before the Cybercrime Prevention Act was signed into law and updated in 2014 — added that the businessman had ties with illegal drugs and trafficking.

While Santos was found liable as author and Ressa as executive editor, Rappler Inc. was exonerated.

The two will remain free on bail they posted in 2019. 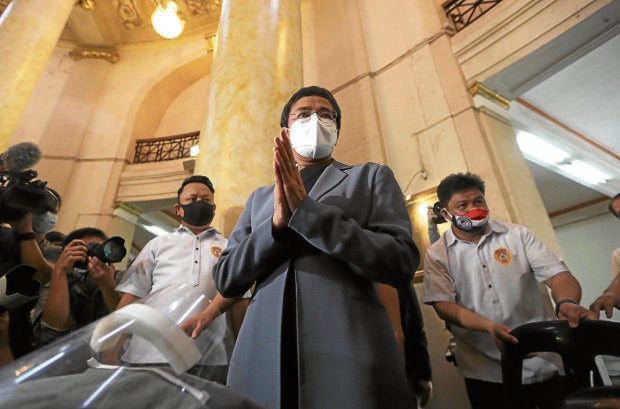 DEFIANT Rappler CEO Maria Ressa rallies Filipinos to challenge any “brazen move’’ to suppress their rights after she and a former Rappler researcher were found guilty of cyberlibel by a Manila local court on Monday morning. (Photo by NIÑO JESUS ORBETA / Philippine Daily Inquirer)

Ressa and Santos were ordered to pay P200,000 in moral damages and P200,000 in exemplary damages. In addition, they were sentenced to six months and one day to six years of imprisonment, which can be appealed up to the Supreme Court.

Ressa’s camp has 15 days to make a decision on what legal steps to take, said lawyer Theodore Te.

Ressa and various groups said the charge was an attack on press freedom and democracy, and that the outcome would impact future cyberlibel cases.

“We should not be voluntarily giving up our rights, we will take this … we will fight,” said the former CNN Jakarta bureau chief, addressing Filipino journalists.

President Rodrigo Duterte has accused the news website, which is critical of his administration, of peddling fake news and of being owned by Americans. He has also banned Rappler from covering him in Malacañang.

Presidential spokesperson Harry Roque said that the decision of the regional trial court should be respected and that Ressa had other avenues to file an appeal. “We wish her the best,” he said.

Keng said the conviction of Ressa and Santos had, to some extent, vindicated his name.

“Even today, when the truth should have set me free, Rappler’s lies still resound after the bang of the gavel has faded away,” he said in a statement.

Keng added that as “proven” in the trial, he had neither been investigated for illegal activities nor charged accordingly.

“Ressa portrays herself as an alleged defender of press freedom and as a purported target of the Philippine government, but this in no way exempts her from respecting and following Philippine laws,” said the Century Peak Holdings Corp. CEO, who was represented at the promulgation by three lawyers.

The ruling said the prosecution had established that all the elements of cyberlibel were present in the update of the story in 2014.

Montesa said the story was defamatory, as Keng was linked to multiple illegal activities — smuggling, murder, human trafficking, among other crimes. 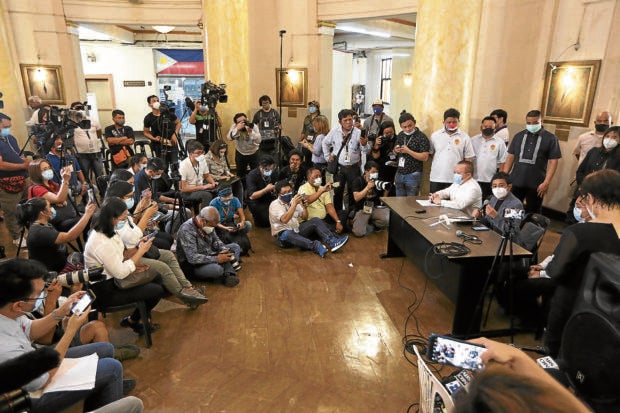 She ruled that the 2014 update of the story on the news website — which Rappler claimed was only a correction to a typographical error — was “a republication.”

“The court finds that the subject was republished with reckless disregard of whether it was false or not. This clearly shows actual malice,” the judge said.

A Department of Justice resolution has said that the prescription period is 12 years because cyberlibel is punishable by jail time of at least six years. Keng filed the cyberlibel complaint in the National Bureau of Investigation in 2017.

Montesa wrote that Rappler’s head of the investigative desk, Chay Hofileña, who testified for the defense, had failed to provide documentary evidence on the correction of the typographical error.

Given that Keng was a private individual, malice was presumed, according to the judge.

The decision said the various crimes to which Keng was linked, as written in the story, were unverified and proven to be untrue during the trial.

“This utter lack of verification is contrary to the standard maintained in Rappler, as testified to by Hofileña, stressing the importance of journalistic core values that is accuracy, truth-telling, fairness and balance. She emphasized that fairness and balance [are] all about getting the other side of the story,” Montesa wrote.

Lawyer Leonard de Vera — whose previous clients include Keng and one of the six witnesses presented by the prosecution — had testified that he had asked Rappler to publish Keng’s side.

No legal action was immediately filed as Keng wanted to deny the allegations by publishing his side of the story.

A reporter was assigned to interview De Vera. He also sent a certification from the Philippine Drug Enforcement Agency that Keng had no derogatory record related to illegal drugs.

Keng side not published

Montesa said that if Rappler was adhering to fairness and balance, the news website should have published Keng’s clarification.

Ressa, a journalist who was named Time Person of the Year 2018 along with other “Guardians,” was arrested on Feb. 13, 2019, for the cyberlibel charge.

Just days after the Securities and Exchange Commission revoked Rappler’s license to operate, Ressa was summoned by the NBI over Keng’s cyberlibel complaint.