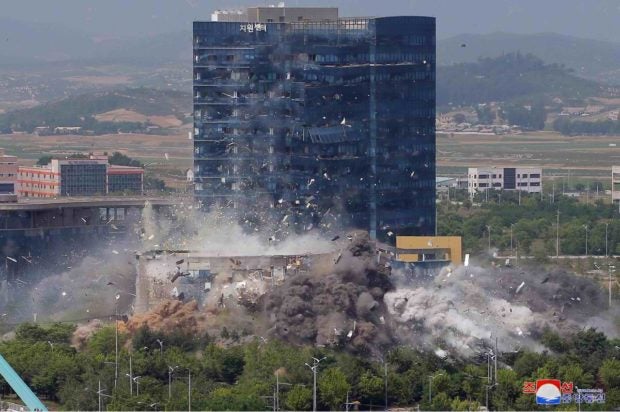 On Saturday night, some unusual movements were detected around the liaison office in the North’s border town of Kaesong, such as vehicles moving around, according to the sources.

It was right after leader Kim’s influential sister Kim Yo-jong issued a statement saying, “Before long, a tragic scene of the useless north-south joint liaison office completely collapsed would be seen.”

Then on Tuesday, North Korea took action by blowing up the liaison office, a symbol of inter-Korean reconciliation and a result of the Panmunjom Declaration signed by South Korean President Moon Jae-in and Kim Jong-un on April 27, 2018.

“North Korea seems to have placed explosives inside to blow up the building,” a source said.

The regime has threatened to take other steps, including dispatching troops to the now-shattered Kaesong complex, as well as the Mount Kumgang tourist zone on the east coast.

It also vowed to restore guard posts removed from the Demilitarized Zone (DMZ) and resume all kinds of regular military exercises in violation of the inter-Korean Comprehensive Military Agreement (CMA) signed in September 2018.

In response, Seoul’s defense ministry said the North will “pay the price” if it carries out such provocative moves, stressing that the military is in a full posture to deal with any eventualities. Yonhap