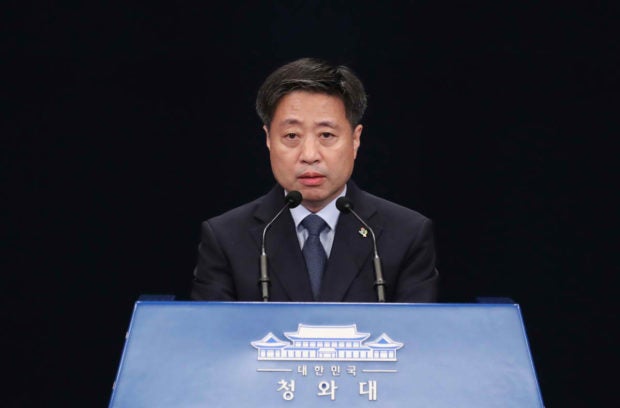 SEOUL — The office of President Moon Jae-in strongly condemned the sister of North Korean leader Kim Jong-un on Wednesday for her “rude and senseless” criticism of Moon and warned that it won’t tolerate the North’s unreasonable words and acts anymore.

“It is a senseless act to disparage (Moon’s speech earlier this week) in a very rude tone without understanding its purpose at all,” Yoon Do-han, Cheong Wa Dae’s senior secretary for public communication, said in a war of words between the two Koreas.

Hours earlier, Kim Yo-jong, a powerful sister of the leader, launched an unusually harsh direct criticism of Moon over his remarks on inter-Korean relations earlier this week on the 20th anniversary of the historic Seoul Pyongyang summit. Moon reaffirmed his unswerving commitment to a pair of 2018 summit deals with the North and called on its sitting leader not to reverse it.

Yoon said what Moon meant was to emphasize that the two Koreas should not back away from the current inter-Korean relationship, which has overcome a crisis of war, and to resolve pending issues via communication and cooperation.

“We won’t tolerate any more of North Korea’s indiscreet rhetoric and act,” which “fundamentally harm” mutual trust between the leaders of the two sides, he added.

He expressed strong regret that the North unilaterally disclosed the South’s offer to dispatch a special envoy there in a bid to diffuse tensions on the peninsula.

It’s an “unprecedentedly unreasonable” act to deliberately distort the purpose of the proposal, he stressed, adding that the North should have “basic etiquette.”

The North’s recent series of provocative moves will not be of help to North Korea, and it should be held responsible for “all consequences,” according to the senior secretary.

His strongly worded statement against the North came shortly after Cheong Wa Dae convened another emergency virtual conference of the National Security Council for an analysis of the North’s new statements. Yonhap