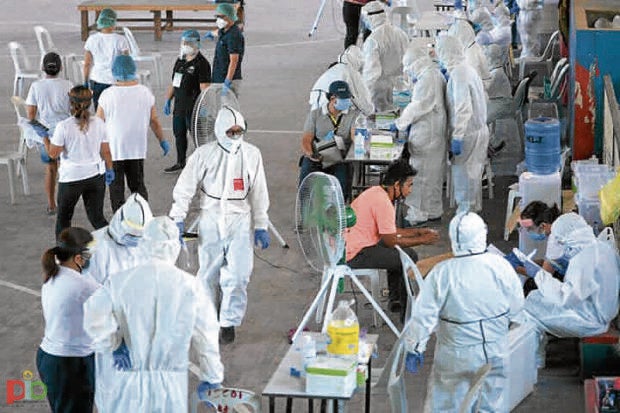 LOCKED DOWN AGAIN Cebu City is back to the stricter enhanced community quarantine after reporting continuous rise in the number of COVID-19 cases. The local government is conducting mass testing, like in this file photo, as a means to determine how widespread the severe respiratory disease has become. —PHOTO FROM CEBU CITY PUBLIC INFORMATION OFFICE

CEBU CITY, Cebu, Philippines — The tragic deaths of a foreigner and a barangay chair while they waited for hours for urgent medical attention illustrated this city’s lack of capacity to provide critical care for new coronavirus disease (COVID-19) patients, which had prompted President Duterte to put it back under enhanced community quarantine (ECQ).

On Sunday, Barry Grote, a British national, was taken by his friends in an ambulance to a private hospital after he complained he had trouble breathing.

But the suspected COVID-19 patient could not be accommodated in the emergency room as 10 others were waiting in line ahead of him.

So he waited inside the ambulance from 2 p.m. until he suffered a cardiac arrest at 10 p.m.

The ambulance and emergency room staff were unable to revive him.

A week earlier Manolita Abarquez, chair of Barangay Pardo who reportedly had pneumonia, died after at least seven hospitals refused to admit her as they were already full of patients.

Abarquez, 63, and Pauya were suspected to have been infected with SARS-CoV-2, the virus that causes COVID-19, a severe respiratory disease. The results of their swab tests have not been released.

One of Grote’s friends was presented a bill amounting to P39,000 for the 30-minute attempt to resuscitate him.

“He could still be alive today if not for that damn queue. Imagine, it was an emergency situation and yet he was made to wait for eight hours?,” said Byron Garcia, brother of Gov. Gwen Garcia and one of Grote’s friends who narrated the Briton’s ordeal on Facebook.

Following the deaths of Abarquez and Pauya, Cebu City Councilor Raymond Alvin Garcia vowed to draft an ordinance to compel hospitals to accept and provide enough beds for COVID-19 patients or those with flu-like symptoms.

The owners of an erring hospital would be made to pay a P5,000 fine or face jail time.

On Monday, Mr. Duterte ordered Cebu City to return to ECQ in which stricter quarantine measures, such as the closure of nonessential businesses and the cancellation of public transportation, would again be implemented starting June 16.

In a statement on Monday, Dr. Jaime Bernadas, director of the Department of Health (DOH) in Central Visayas, admitted that hospitals in Cebu City were filled beyond capacity due to the rise in the number of patients with symptoms of COVID-19.

He noted that social media posts cited cases of patients who were refused admission in hospitals because they were already full.

“We have investigated these reports and established that these incidents were true,” Bernadas said.

He said private hospitals in Metro Cebu had committed to expand their capacity by an average of 30 percent.

The regional health office will augment the health-care staff to assist the expansion of these hospitals’ capacity, Bernadas said.

He said the hospitals would cater to “severe and critical” COVID-19 patients while those with mild symptoms would be cared for at the city government’s three quarantine facilities, which had a combined total of 338 beds.

In a statement, Cebu Doctors’ Hospital (CDH) said it was grateful for the DOH promise to send interim nurses to add to its current manpower.

CDH also reported that from one pneumonia wing and two isolation centers, it added an entire floor for COVID-19 patients and opened another pneumonia wing which would increase its overall capacity by over 200 percent.

Chong Hua Hospital (CHH) said it was also preparing the resources to enable it to expand its noncritical and critical care capacity.

“Our community is seeing another rise in cases, and should this be left unchecked, we fear that this continued rise would eventually burden our local health-care system even further,” CHH said.

Cebu City Mayor Edgardo Labella said he would appeal Mr. Duterte’s decision and ask that the city be returned to the more relaxed general community quarantine.

Labella attributed the rise in COVID-19 cases to the continued massive testing as well as the backlogs in the DOH reports that were just coming out.

The city has tested at least 25,000 individuals, Labella said.

He said local hospitals were “overwhelmed” by a large number of patients in recent days.

Labella said he had directed that those with mild to moderate cases be taken to quarantine facilities instead.

Bernadas said over 30 percent of the COVID-19 cases in the cities of Cebu, Mandaue and Lapu-Lapu had recovered. About 24 percent were hospitalized while more than 40 percent were in quarantine centers or in their homes.

The fatality rate was 1.08 percent, he said.