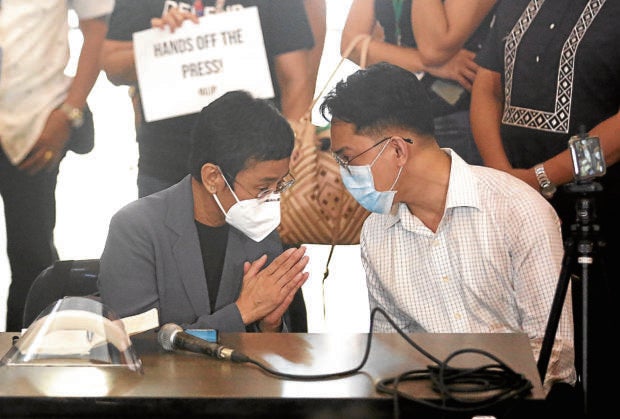 GUILTY Rappler chief executive officer Maria Ressa speaks with former researcher-writer Reynaldo Santos Jr. during a press conference they called on Monday after they were found guilty of cyberlibel. Ressa said they would fight the ruling. —NIÑO JESUS ORBETA

MANILA, Philippines — As the cyberlibel conviction of Rappler CEO and executive editor Maria Ressa and former researcher Reynaldo Santos Jr. raised questions about the nuances of the cybercrime law, media law pundits said the principles of prescription and republication online remained a legal gray area that could be taken up by a higher court.

“The legal issue will be what is republication in the online sense, because the article was published in 2012 and it’s been there since 2012, but when the article was edited in 2014, was that already republication? ” said Sandra Olaso-Coronel, who teaches at the University of the Philippines (UP) College of Law.

“That’s another issue that will be determined by the Supreme Court,” she said.

Olaso-Coronel said Ressa’s case could be an opportunity for the Supreme Court to finally address the provisions of cyberlibel that had remained vague.

“The issue of republication is already settled in newspapers and in broadcast, but not in online,” she said. “Here, the article was edited and brought back online. Under the technical process of editing, you take it down and put it back online so it would look like it was just published.”

But lawyer Rico Quicho took note of the fact that the defense “did not even refute or show proof that the article did not resurface and the revision is a mere change of a letter.”

“While the court should rely on the strength of the evidence presented by the prosecution and not the weakness of the defense, Ressa and Santos’ camp should have been more diligent in responding to the issues raised by the prosecutor,” said Quicho.

Olaso-Coronel also cited the finding of Judge Rainelda Estacio-Montesa of the Manila Regional Trial Court that the defense had failed to present the person who edited the article to explicitly show the written and technical differences between the 2012 and 2014 versions.

“The judge had to rule based on what was presented in court. Because the judge cannot second-guess,” she added.

Under the Revised Penal Code, one can only be sued for libel within a year of the publication of the article.

The cyberlibel case was filed by Wilfredo Keng in 2017. The original Rappler article, written by Santos, came out on May 29, 2012.

Judge Montesa on Monday ordered Ressa and Santos to pay P400,000 in damages and sentenced them to a prison term of up to six years.

“Therefore, the specific libel prescriptive period in the Revised Penal Code applies, and not an older law, Commonwealth Act No. 3326 on prescriptive periods, which the DOJ (Department of Justice) and the judge used in this case,” said Lambino.

The defense also argued that the cybercrime law, passed four months after the article was posted, could not be retroactively applied to the article in question.

Lambino said the cybercrime law could not be made to cover an article that was published before the law took effect.

“Oblivion through the short passage of time extinguishes criminal liability for libel to compensate for criminalizing an act which borders on the exercise of the freedom of expression and the freedom of the press,” Lagman said.

Quicho, one of former Chief Justice Renato Corona’s lawyers in his impeachment trial in 2012, said that technically, there really was no cyberlibel in the Philippines’ system of laws.

“The cybercrime law, in its failure to provide the penalty for cyberlibel, failed to create a new crime, thus, other than the modified penalty, the rules on libel shall still conform with Article 355 [of the Revised Penal Code ], even if such was committed using a computer or some digital system,” he said.

Whether the judge correctly applied the prescription principle to the case can also be argued in the Supreme Court with two valid legal positions, said Olaso-Coronel.

“There is validity in the argument that because this law does not define a new crime, then the prescriptive period under the penal code is applicable,” she said.

“But there is also value in the argument that it may not be a new crime but there is a special law that defines it and therefore the rule on prescription applicable to special laws will apply.”

Without commenting on the merits of the case, Lambino said there was “absence of malice and no libel” as Rappler’s report was based on an intelligence report relied upon by the National Security Council.The report, besides claiming that Keng lent Corona vehicles during his impeachment trial, said the businessman had links to illegal drugs and trafficking.

Quicho said the mere citing of published reports “is not tantamount to imputation of a crime.”

The side of Keng, who denied the veracity of the intelligence report used by Rappler in the article via phone interview since he was abroad, was also published in the same article, noted Lambino.

The Integrated Bar of the Philippines said the legal arguments against Rappler’s cyberlibel conviction should be left to the Court of Appeals to resolve.

Presidential spokesperson Harry Roque said Ressa had nobody but herself to blame for her conviction because she had failed to present evidence to show there was no malice in her website’s report about Keng. INQ