MANILA, Philippines — Some local executives who signified their support to the controversial Anti-Terrorism Bill were only forced to do so by authorities, party-list group Bayan Muna claimed Tuesday.

According to Rep. Carlos Zarate, they have received reports that local government unit (LGU) officials were warned that failure to back the legislation that would strengthen the Human Security Act of 2007 would mean being tagged as leftists and terrorists.

“We have received reports that LGUs are being made to sign a document supporting the new terror bill, otherwise they will be red-tagged or branded as supporting terrorism,” Zarate said.

“We have also obtained documents asking for mandatory attendance and signatures for the peace and order council meetings to support the terror bill,” he added.

Bayan Muna showed several photos of alleged official documents, from various towns like Dipaculao in Aurora, and a police document from Cebu where officers were required to attend an orientation for the Anti-Terror Bill. 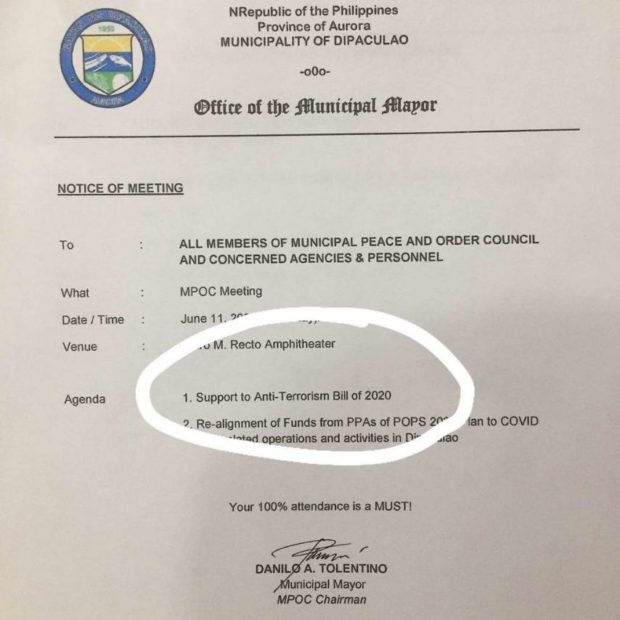 On June 13, reports came out that local leaders in Mindanao, an area affected by various wars between the government and rebel forces, approve of the proposed law.  And just recently, presidential spokesperson Harry Roque said that support for the Anti-Terrorism Bill has been growing among LGUs.

In a memorandum from the Cebu Police Provincial Office, officers were encouraged to support “the advocacy of our President Rodrigo Roa Duterte,” and use social media to keep people away from leftist groups. 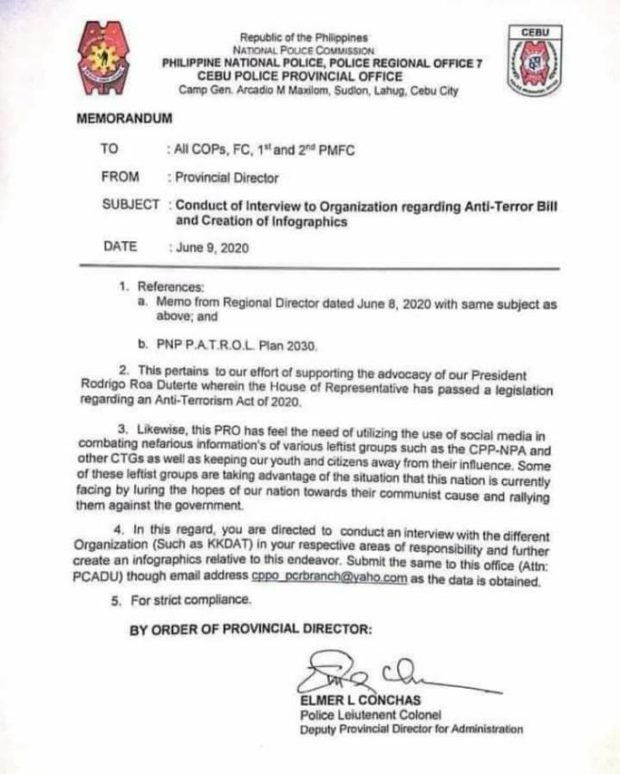 But Department of Interior and Local Government spokesperson and Undersecretary Jonathan Malaya said the assertion of Bayan Muna is “baseless and complete (sic) false.”

According to Malaya, “There is no such memo or advisory issued by the Secretary (Eduardo Año) to the LGUs.”

INQUIRER.net has also tried to ask for Cebu Police Provincial Office chief Col. Roderick Mariano’s comment on the claims of Bayan Muna as well as to confirm the authenticity of the documents shown by the group. However, Mariano has yet to answer INQUIRER.net’s query as of posting time.

The increase of posts red-tagging activists and defacing images of members of progressive organizations surfaced after they voiced opposition to the Anti-Terror Bill, which many believe is prone to abuse due to a vague definition of terrorism.

Aside from that, administration critics claimed that the bill, once enacted into law, will tip the balance of power to the executive with provisions like warrantless arrests and prolonged detentions without cases, in contrast to the removal of safeguards that will ensure that erring officers are made liable.

People also believe that the timing of the bill’s passage is off, as the country is tackling a public health crisis due to the COVID-19 pandemic.

The bill has already been submitted to Duterte for his signature despite several lawmakers taking back their affirmative votes to the measure.

Zarate then asked Gamboa and other officials to make their subordinates behind such prejudicial posts and directives liable.

“PNP Chief Gen. Gamboa should make his police commanders accountable or they will just walk all over him,” he said.  “The fake clamor for the terror bill being generated by the Duterte administration should also be exposed because everyone will be negatively affected by this draconian bill.”