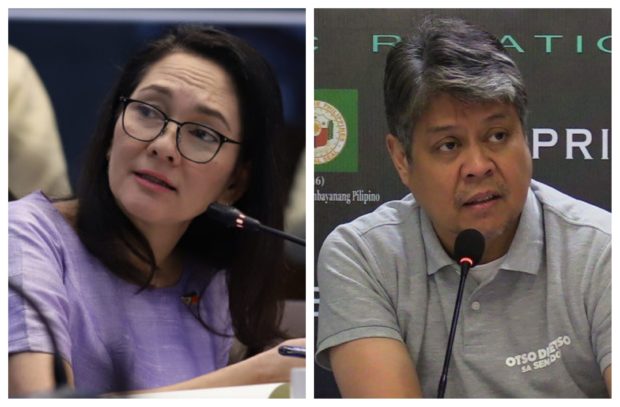 MANILA, Philippines — Opposition senators on Monday urged Filipinos to speak out and “vigorously oppose the tyranny” under the current administration following the conviction of Rappler CEO Maria Ressa and former research-writer Reynaldo Santos Jr. over a cyber libel case.

In a statement, Senator Francis Pangilinan said it would have been a surprise if Ressa and Santos were acquitted given the “current political atmosphere of repression and authoritarianism.”

“The silencing of critics and the attacks on the media has been going on for three years now,” he said.

“And unless we stand up, speak out, and vigorously oppose the tyranny in our midst, their conviction will not be the last” he added.

For her part, Senator Risa Hontiveros said the guilty verdict handed down by a Manila court to Ressa and Santos sends a “chilling message” against critics of the administration.

“The attacks on the free press & journalists are a danger to our democracy & to us Filipinos,” the opposition senator said on Twitter.

(Today’s conviction sends a chilling message to all: If you’re a critic, you can be shut down and you can be silenced).

Ressa and Santos are the first journalists to be found guilty of cyber libel.

Hontiveros then urged the Filipino public to “speak out.”

I urge everyone to speak out. Dumarami tayo. We are complicit if we are silent.

“I urge everyone to speak out. Dumarami tayo. We are complicit if we are silent. Takot sila, kaya nila tayo pinapatahimik,” she said.

(Our numbers are growing. We are complicit if we are silent. They are afraid, that’s why they are silencing us).

“This year alone & while we’re responding to a global pandemic, we have witnessed the shutdown of a far-reaching media institution & the weaponization of the law against a journalist doing unbiased reporting on extrajudicial killings in the country,” the lawmaker wrote in a separate tweet.

She was referring to ABS-CBN, which was forced off the air after its television and radio broadcast operations nationwide were ordered shut a day after its 25-year-franchise expired.

Detained Senator Leila de Lima joined her colleagues in condemning Ressa and Santos’ conviction, saying it was “another demonstration” of the Duterte administration’s “weaponization of law against those who dare speak truth to power.”

“Jailing me for over three years now is only one of the thousand sinister ways they are causing fear in the hearts of Filipinos who fight for what is just and right,” the senator, one of the President’s staunchest critics, said in a dispatch from Camp Crame.

She has been detained since February 2017 over what she repeatedly said were “trumped-up” drug-related charges.

“They will not stop at going after critics and human rights defenders. To them, journalists too must be silenced. But we will not allow it,” De Lima added.

Meanwhile, former Senator Antonio Trillanes IV said the guilty verdict against the Rappler CEO was an “obvious attack” against press freedom and an “attack against our democracy itself.”

“We are now but a few steps away from Martial Law,” Trillanes, who has been critical of the Duterte administration, said in a statement.

(It is now time to speak up and to come together before we lose our freedom).