Yankee go home: What does moving troops out of Germany mean? 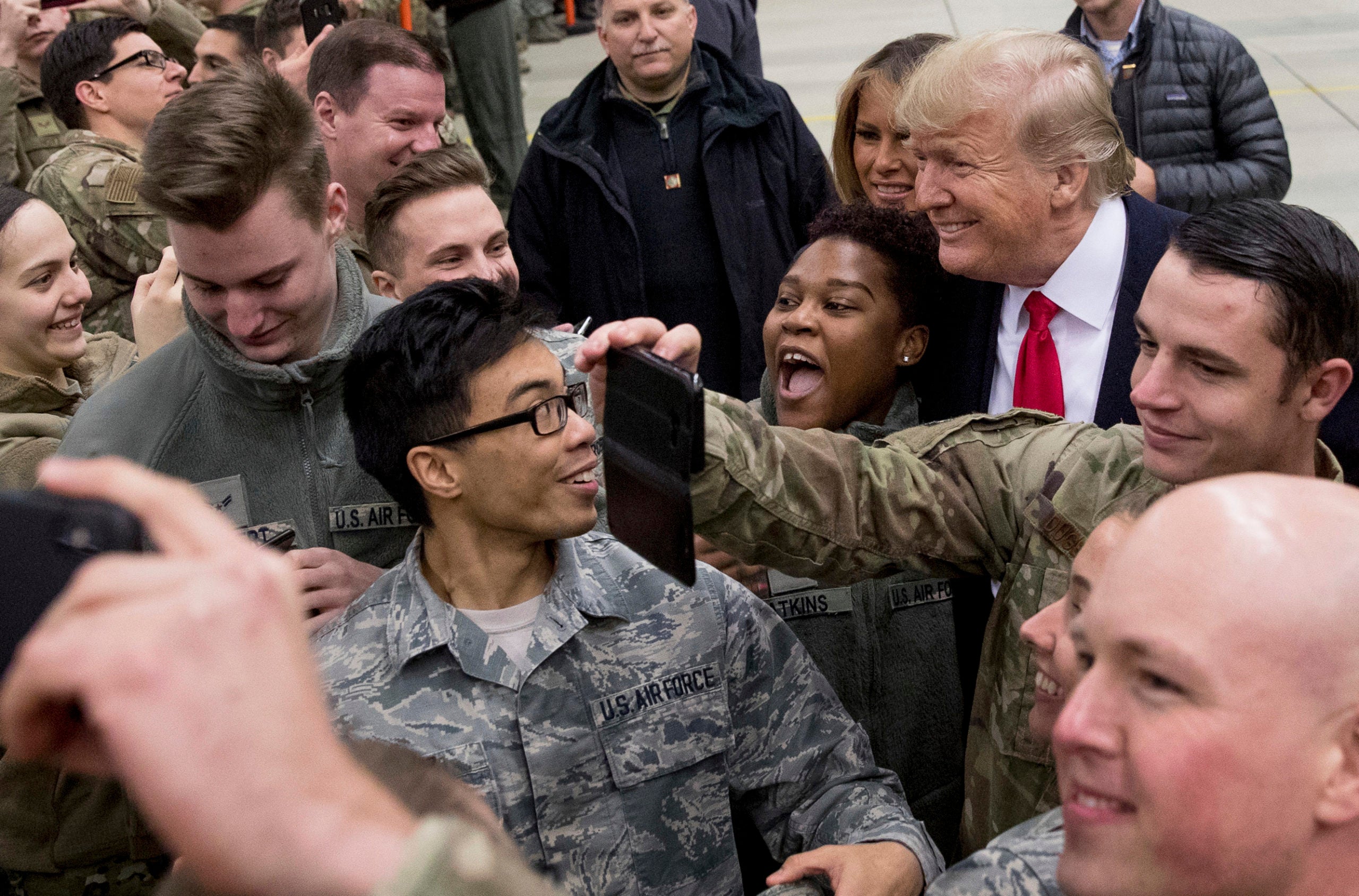 FILE – In this Thursday, Dec. 27, 2018 file photo, President Donald Trump, center right, and first lady Melania Trump, center left, greet members of the military at Ramstein Air Base, Germany. After more than a year of thinly veiled threats that the United States could start pulling troops out of Germany unless the country increases its defense spending to NATO standards, President Donald Trump appears to be going ahead with the hardball approach with a plan to reduce the American military presence in the country by more than 25 percent. (AP Photo/Andrew Harnik, file)

BERLIN — After more than a year of thinly-veiled threats to start pulling U.S. troops out of Germany unless Berlin increases its defense spending, President Donald Trump appears to be proceeding with a hardball approach, planning to cut the U.S. military contingent by more than 25%.

About 34,500 American troops are stationed in Germany — 50,000 including civilian Department of Defense employees — and the plan Trump reportedly signed off on last week envisions reducing active-duty personnel to 25,000 by September, with further cuts possible.

But as details of the still-unannounced plan trickle out, there are growing concerns it will do more to harm the U.S.’s own global military readiness and the NATO alliance than punish Germany.

The decision was not discussed with Germany or other NATO members, and Congress was not officially informed — prompting a letter from 22 Republican members of the House Armed Services Committee urging a rethink.

“The threats posed by Russia have not lessened, and we believe that signs of a weakened U.S. commitment to NATO will encourage further Russian aggression and opportunism,” Rep. Mac Thornberry of Texas wrote in a letter to Trump with his colleagues. Sen. Jack Reed, the ranking Democrat on the Senate Armed Services Committee, slammed Trump’s move as “another favor” to Russian President Vladimir Putin.

But Richard Grenell, who resigned as U.S. ambassador to Germany two weeks ago, told Germany’s Bild newspaper that “nobody should be surprised that Donald Trump is withdrawing troops.”

Grenell, who declined to comment for this article, said he and others had been pushing for Germany to increase its defense spending and had talked about troop withdrawals since last summer.

“Donald Trump was very clear we want to bring troops home,” he said, adding: “there’s still going to be 25,000 American troops in Germany.”

The suggestion that removing troops will punish Germany, however, overlooks the fact that American troops are no longer primarily there for the country’s defense, said retired Lt. Gen. Ben Hodges, who commanded U.S. Army Europe from 2014 until 2017.

Gone are the days when hundreds of thousands of American troops were ready to fight in the streets of Berlin or rush into the strategic Fulda Gap, through which Soviet armor was poised to push into West Germany during the Cold War.

“The troops and capabilities that the U.S. has deployed in Europe are not there to specifically defend Germany, they are part of our contribution to overall collective stability and security in Europe,” said Hodges, now a strategic expert with the Center for European Policy Analysis, a Washington-based institute.

American facilities include Ramstein Air Base, a critical hub for operations in the Mideast and Africa and headquarters to the U.S. Air Forces in Europe and Africa; the Landstuhl Regional Medical Center, which has saved the lives of countless Americans wounded in Iraq and Afghanistan; and the Stuttgart headquarters of both the U.S. European Command and the U.S. Africa Command. There’s also the Wiesbaden headquarters of U.S. Army Europe, the Spangdahlem F-16 fighter base and the Grafenwoehr Training Area, NATO’s largest training facility in Europe.

Hodges said the facilities are a critical part of America’s global military footprint.

“What’s lost in all this is the benefit to the United States of having forward deployed capabilities that we can use not only for deterrence … but for employment elsewhere,” he said. “The base in Ramstein is not there for the U.S. to defend Europe. It’s there as a forward base for us to be able to fly into Africa, the Middle East.”

Trump indicated last summer that he was thinking of moving some troops from Germany to Poland, telling Poland’s President Andrzej Duda during an Oval Office meeting: “Germany is not living up to what they’re supposed to be doing with respect to NATO, and Poland is.”

Duda has been trying to woo more American forces, even suggesting Poland would contribute over $2 billion to create a permanent U.S. base — which he said could be named “Fort Trump.”

In the current plan, at least some Germany-based troops are expected to be shifted to Poland.

Following Trump’s comments last June, U.S. Ambassador to Poland Georgette Mosbacher tweeted Aug. 8 that “Poland meets its 2% of GDP spending obligation towards NATO. Germany does not. We would welcome American troops in Germany to come to Poland.”

Grenell then tweeted: “it is offensive to assume that the U.S. taxpayers will continue to pay for more than 50,000 Americans in #Germany, but the Germans get to spend their surplus on #domestic programs.”

In response, Chancellor Angela Merkel reiterated Germany’s commitment to “work toward” the 2% NATO defense spending benchmark — a goal it hopes to meet in 2031.

“There is a lot invested here, and I think that we, in very friendly talks, will naturally always continue to heartily welcome these American soldiers, and there are also good reasons for them to be stationed here,” she said.

NATO members agreed at a 2014 summit to “aim to move toward” spending 2% of GDP on defense. Since then, the year Russia annexed the Crimean Peninsula, overall NATO defense spending has grown annually.

Since his election in 2016, Trump has pushed for the 2% as a hard target, and repeatedly singled out Germany as a major offender, though many others are also below the goal.

Germany does need to spend more, Hodges said, but U.S. and NATO interests would be better served if Washington pushed Berlin to spend on broader military needs, like transportation infrastructure, cyber protection and air defense, that would be easier for Merkel’s government to justify to a largely pacifist population.