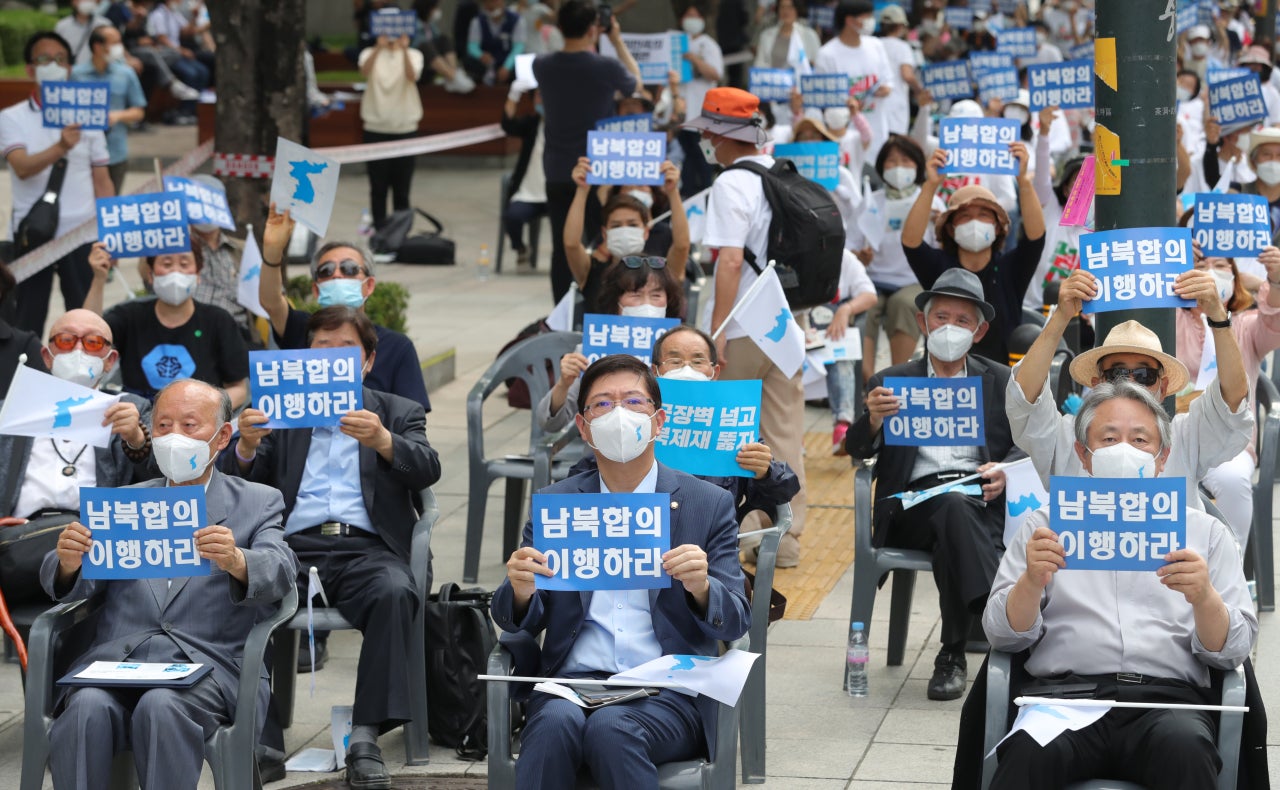 SEOUL — In June 2000, Kim Dae-jung, then the South Korean president, flew to Pyongyang and was greeted by a broadly smiling Kim Jong-il, then leader of North Korea. The two clutched each other’s hands at the airport, embarking on a three-day summit that marked the first time the leaders of the divided Koreas had met since the 1950-53 Korean War.

The highly anticipated meeting culminated in the adoption of the June 15 South-North Joint Declaration, in which the two sides pledged to work together for peace and unification on the Korean Peninsula. Later that year Kim Dae-jung’s reconciliation efforts won him the Nobel Peace Prize, a first for the country.

Nevertheless, there was controversy surrounding Kim’s “Sunshine Policy” — engaging North Korea with massive shipments of aid, investment and trade to encourage the reclusive regime to open up. Critics said it provided cash for the North’s nuclear program. But many agree that the unprecedented summit brought about a thaw in inter-Korean relations and paved the way for later peace initiatives.

Monday marks the 20th anniversary of the landmark agreement. For the past two decades, inter-Korean relations have had their ups and downs. There were military confrontations, the opening and closing of a joint factory park in the North, six-party talks and several inter-Korean summits — all while Pyongyang developed nuclear weapons and ballistic missiles.

The outlook for inter-Korean relations today, despite some significant headway in 2018, is even murkier. The North severed all communications with the South last week, warned of “hostile actions” and decided to treat Seoul as an “enemy.” Many observers are concerned that the hard-won detente could fall apart and inter-Korean relations could be set back all the way to where they were before 2000.

“It’s a critical time where there is a mounting sense of crisis that (inter-Korean relations) could revert back to the period before June 15,” 2000, said Koh Yu-hwan, president of the Korea Institute for National Unification.

“We need to come up with measures as soon as possible to prevent (inter-Korean relations) reverting to confrontation, and possible outbreak of dangerous military conflict,” said Suh Choo-suk, a senior research fellow at the Korea Institute for Defense Analyses. “Putting in mind that this situation could escalate into a bigger crisis, (the government) needs to take a prudent yet cautious approach in regards to both inter-Korean talks and military readiness.”

The North’s latest offensive deals a serious blow to South Korean President Moon Jae-in, who came to power in 2017 with pledges to improve inter-Korean ties. Moon’s policy of engagement — closely aligned with the stance taken by former liberal presidents Kim Dae-jung and Roh Moo-hyun — is a dramatic turn from the hard-line policy pursued by Moon’s two conservative predecessors, Lee Myung-bak and Park Geun-hye, who penalized the North with tougher economic sanctions and refused to negotiate until it would commit to denuclearization.

Moon’s tenure kicked off at a time when provocation by North Korea was at its height — the year when Pyongyang tested a long-range missile that could reach the US mainland and conducted its sixth and most powerful nuclear test.

Amid an escalating war of words between US President Donald Trump and Kim Jong-un, Moon managed to broker a cease-fire the following year by inviting North Korean delegates to the PyeongChang Winter Olympics. That Olympic truce eventually led to three inter-Korean summits between Moon and Kim, and also to the historic Singapore summit between Trump and Kim, which marked the first-ever meeting between the leaders of the US and North Korea. This was all in 2018.

Hopes were running high ahead of the second US-North Korea summit in February 2019. Peace on the Korean Peninsula, and its complete denuclearization, felt imminent. But the Hanoi summit fell through despite much fanfare, as Trump and Kim failed to narrow their differences over the steps each side needed to take toward denuclearization and sanctions relief.

The US-North Korea denuclearization talks deadlocked, and so did inter-Korean relations. In an effort to break the impasse, Moon called for various cross-border projects to engage Pyongyang. They would have entailed allowing South Koreans to travel to North Korea, reconnecting inter-Korean railways and, most recently, pursuing cooperation to fight COVID-19. But the North did not respond to any of Seoul’s proposals.

Pyongyang, instead, cut off all communication channels with Seoul and warned that it might take a number of additional actions — including shuttering the inter-Korean liaison office, permanently closing the Kaesong industrial park and scrapping the 2018 inter-Korean military agreement. The North’s explanation was that Seoul had failed to prevent defector-run groups from sending anti-Pyongyang leaflets across the border.

Seoul responded by vowing to crack down on the launch of propaganda leaflets and other items across the border, while the Unification Ministry filed legal action against two defector-run organizations.

That did not do much to assuage Pyongyang’s anger. Experts say Pyongyang is furious not only about the leaflets, but also out of a deep-seated dissatisfaction with Seoul. It blames Seoul for the strained ties, and for not taking a more active role in inter-Korean issues.

“North Korea appears to express dissatisfaction against the South Korean government’s attitude in the past two or three years,” said Hong Min, a research fellow at KINU. “The North wants the South to play a leading role in persuading the international society and the US, and in regards to inter-Korean issues, but it views that Seoul hadn’t put much effort into it.”

He added that the North seemed to have formulated its hard-line stance well in advance. And depending on Seoul’s response, things could escalate even more in the future.

Why the June 15 declaration still matters

Amid heightened risk, experts called on South Koreans to remember the June 15 declaration and live up to its legacy of peace and reconciliation to achieve a breakthrough in inter-Korean relations.

“If North Korea is dissatisfied with the South Korean government, the two sides need to meet as soon as possible and solve the issue,” said Cheong Seong-chang, director of the Sejong Institute’s Center for North Korean Studies. “While there are areas where it is difficult to narrow down differences, the two sides have to first meet and discuss candidly and start cooperation in the areas that could help each other. The national reconciliation is the legacy of the June 15 declaration that the two Koreas have to pass it down.”

Specifically, he called on the government to make efforts to reconnect the suspended hotlines between the two Koreas; to initiate cooperation in areas that could benefit both sides, such as health care and quarantine efforts amid COVID-19; and also to discuss sensitive issues such as nuclear weapons and missiles.

“The most important result from the first inter-Korean summit is that the South and North agreed on how to achieve peace and unification,” said Lim Dong-won, former unification minister and Kim Dae-jung’s point man on North Korea, recalling his visit to Pyongyang in 2000 when he accompanied Kim to the summit. “Inter-Korean relations are a continuation of advancement, retreat, achievement and setback.

“We should never give up, but persist with patience, consistency and flexibility. And when the opportunity arrives, grasp it and move forward again.”