With colorful placards, parody jingles and a giant “Voltes V” figure, protesters practicing physical distancing filled the Oblation Plaza at the University of the Philippines (UP) Diliman on Friday morning for a “grand mañanita program” to mark the country’s 122nd Independence Day and condemn “state terrorism.”

The organizers derived the event’s name from the much-criticized May 8 birthday party for Police Maj. Gen. Debold Sinas, the Metro Manila police chief who came under heavy criticism for allowing the predawn gathering with his men despite the community quarantine being imposed in the entire Luzon to help contain the spread of the coronavirus.

Earlier threats of arrest, along with the heavy downpour on Friday morning, did not stop various groups from holding the protest action mainly against the proposed Anti-Terrorism Act of 2020, which is awaiting President Duterte’s signature. 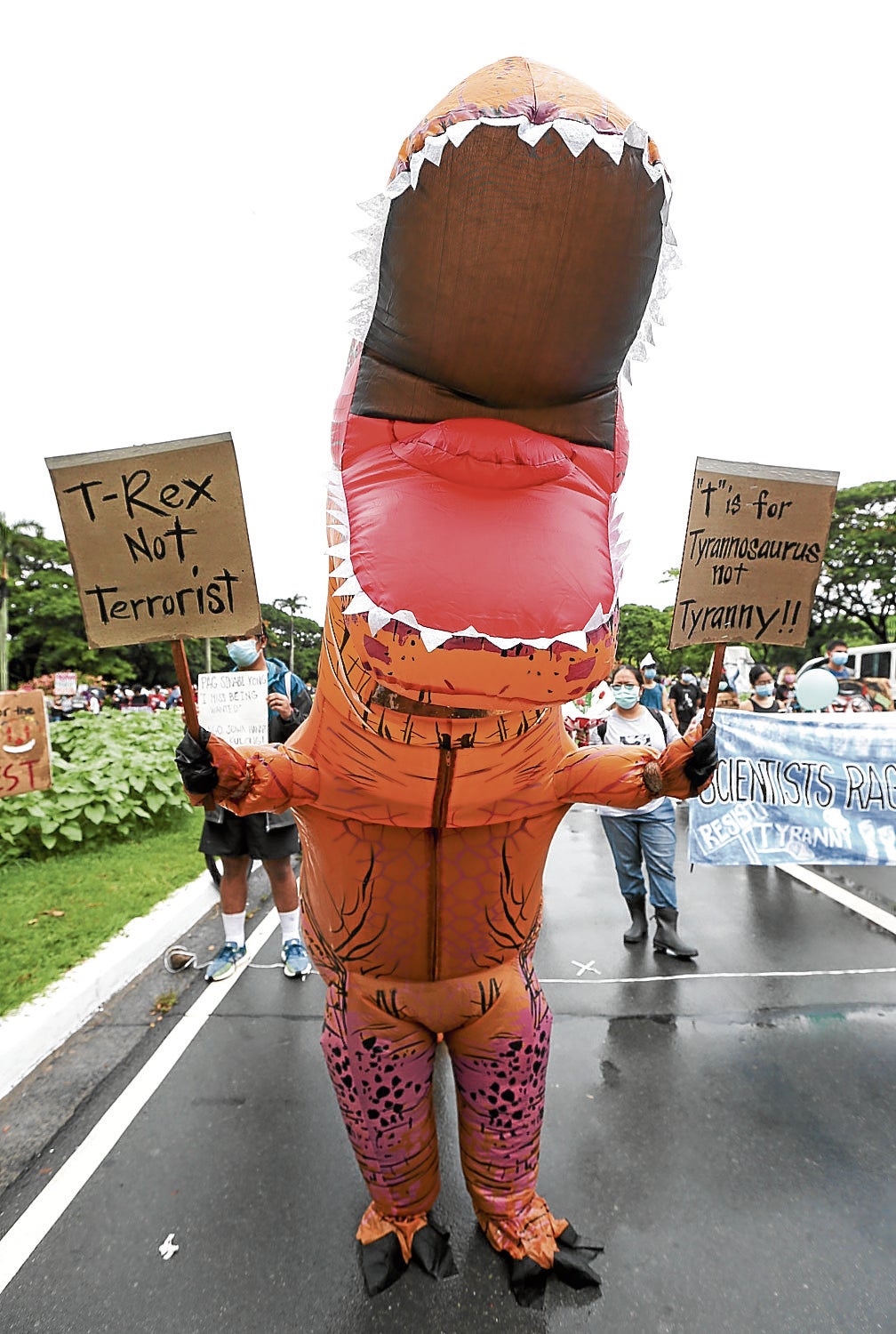 PARTY/PROTEST ANIMAL An activist in a T-Rex suit joins the “mañanita” protest rally at University of the Philippines (UP) Diliman. —PHOTOS BY LYN RILLON

On Thursday, Justice Secretary Menardo Guevarra warned protesters that they faced “penal sanctions under existing public health laws” if they went ahead with their activity, while Gen. Archie Gamboa, the Philippine National Police chief, said his men would “strictly enforce the [health] protocols,” such as the ban on mass gatherings.

But following Friday’s rally, Gamboa issued a statement thanking the public for heeding the PNP’s call to avoid mass gatherings.

The Quezon City Police District (QCPD) said around 700 people joined the rally in Diliman, but protest organizers said up to 5,000 showed up for the 10 a.m. program that ended without tension or violence after three hours.

The QCPD deployed teams at the entrances to the state university, but no arrests were made.

“They tell us to follow guidelines but they have lost the moral ascendancy when they displayed double standard in favor of other officials who have defied the same rules,” said Bagong Alyansang Makabayan chair Renato Reyes, alluding to the Sinas birthday gathering.

The protesters, some of them wearing party hats, came with a videoke machine, a replica of the Voltes V-themed birthday cake at Sinas’ party, and a “pizza box” containing a statement urging accountability for “the missing P275 billion” pandemic fund, among other creative protest materials.

A life-size Voltes V figure made by artist Toym Imao and wielding a sword that bore the word “resist” made an appearance on stage. 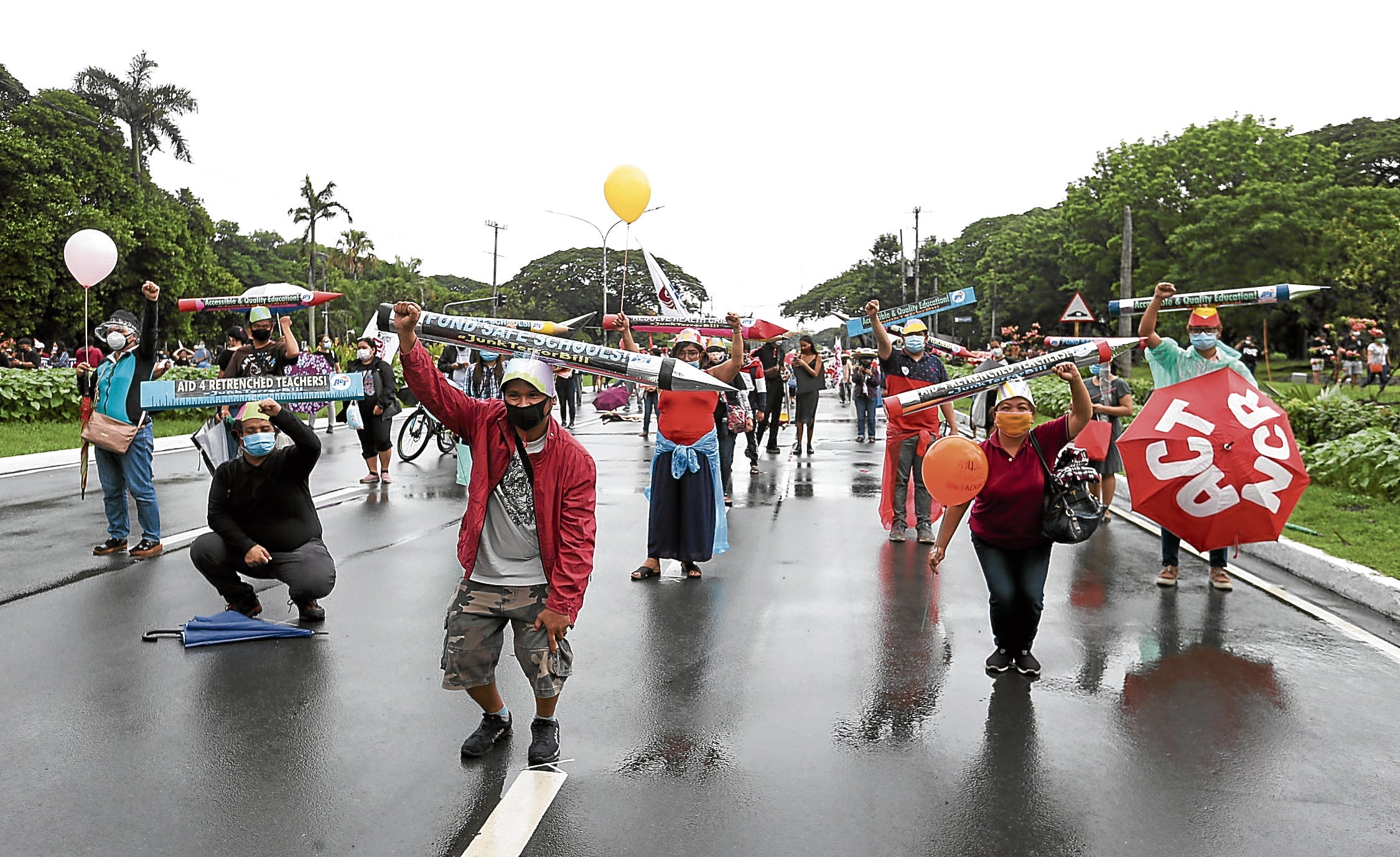 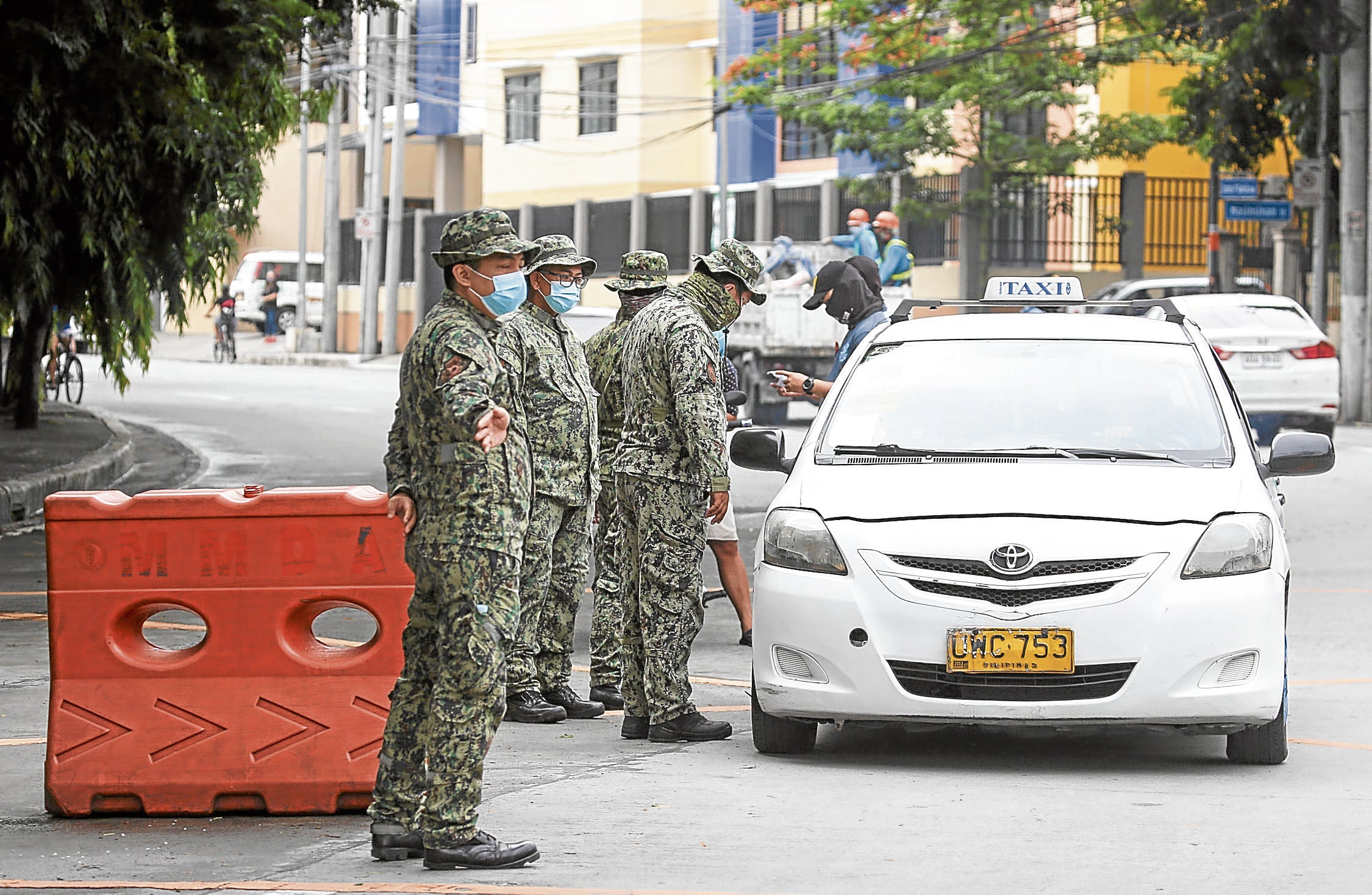 STOP AND GO IN DILIMAN Police question motorists passing by Carlos P. Garcia Avenue which leads to the University of the Philippines; (top) ACT party list members wear pencil and ruler headwear while observing physical distancing at the UP rally.

Hours ahead of the protest rally, police in combat uniform set up checkpoints around the campus.

Imao called this “shades of the Diliman barricades of 1971,” referring to the Diliman Commune event that raged against the Marcos regime a year before the declaration of martial law.

“Today is supposed to be Independence Day—not a potential Diliman Commune reenactment of 1971, for heaven’s sake,” said Edre Olalia, chair of the National Union of Peoples’ Lawyers.

“Unless there is probable cause or common sense, no one—whether on foot, bike, or car—can be stopped and blocked from ingress and egress of a free campus,” Olalia said. 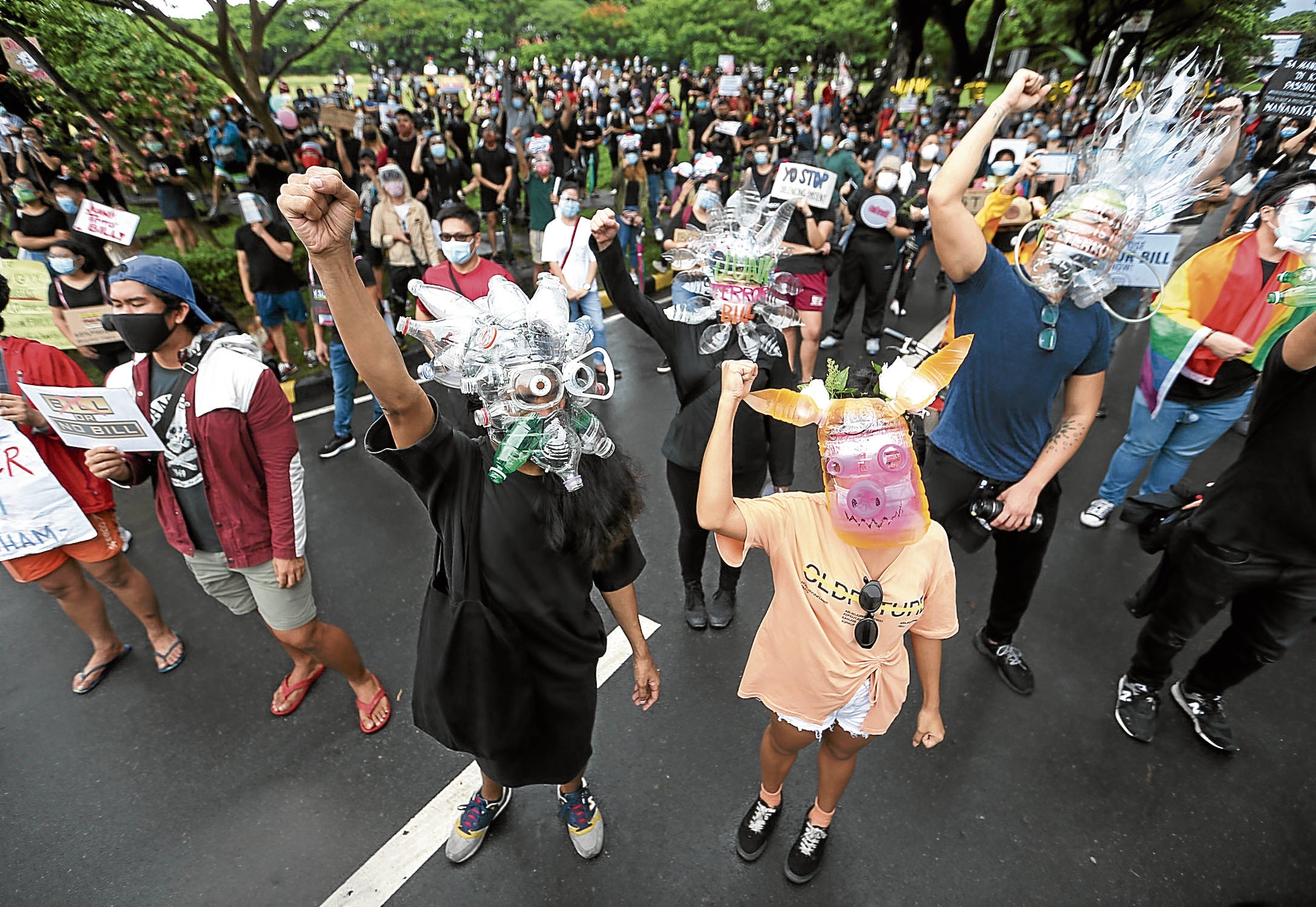 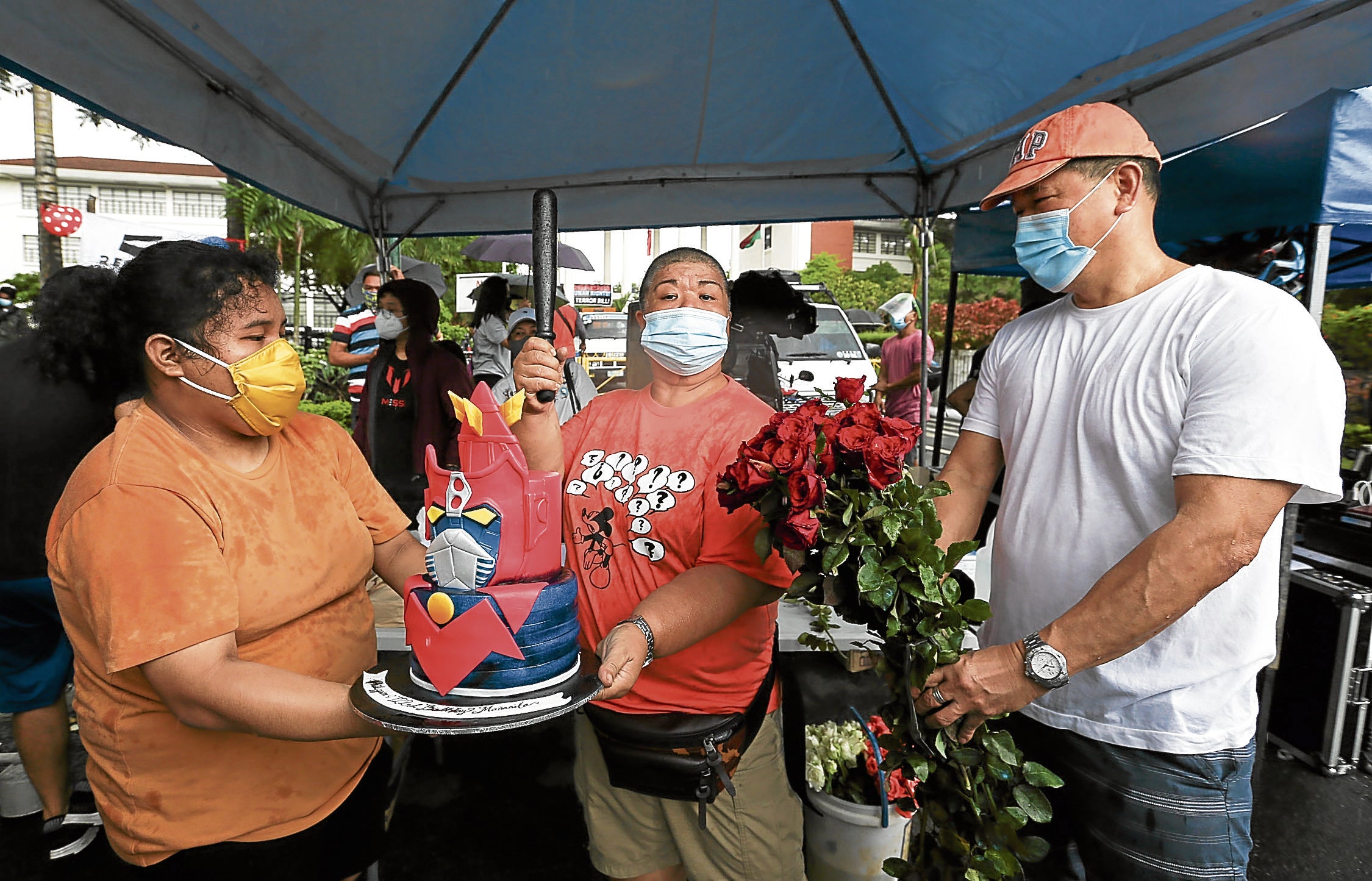 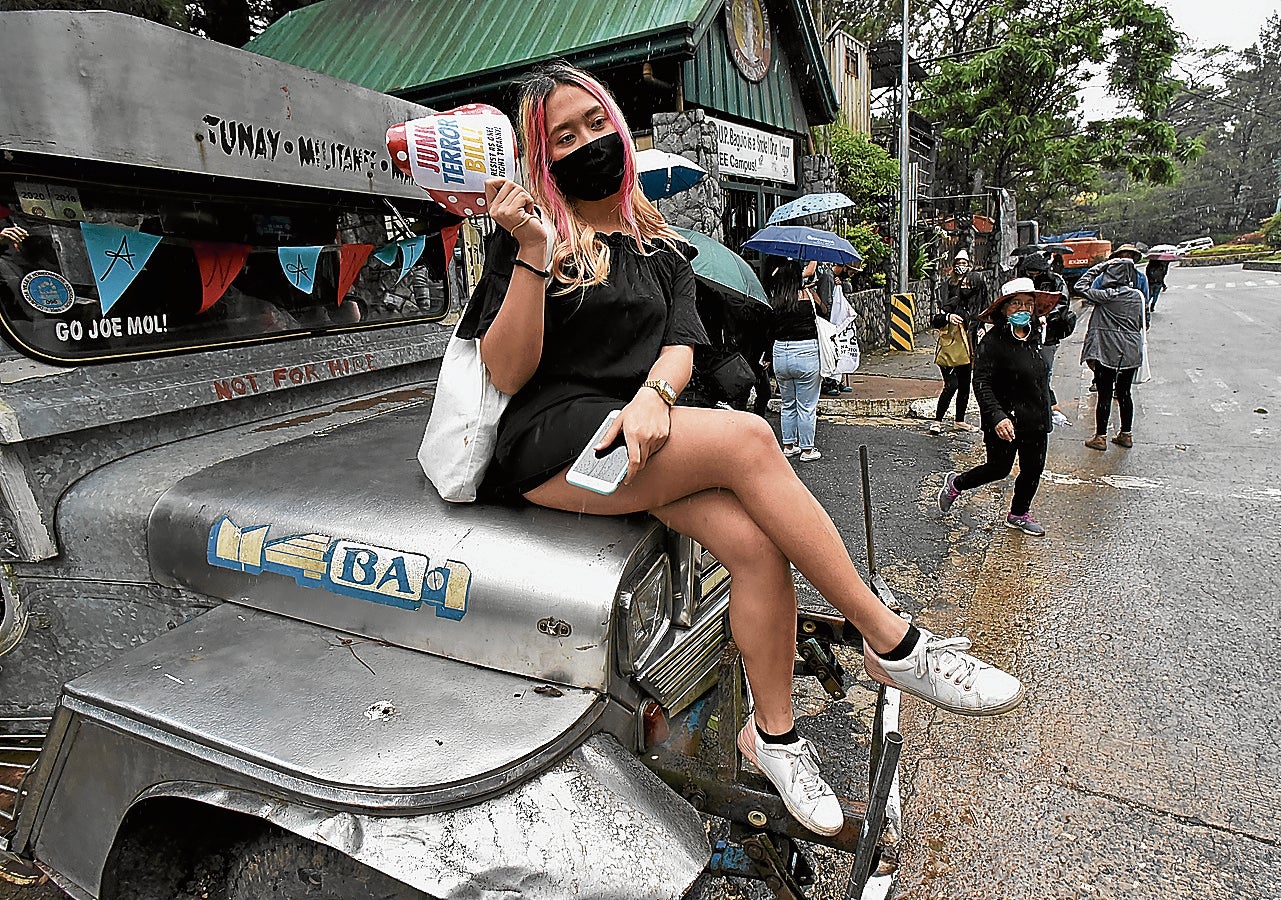 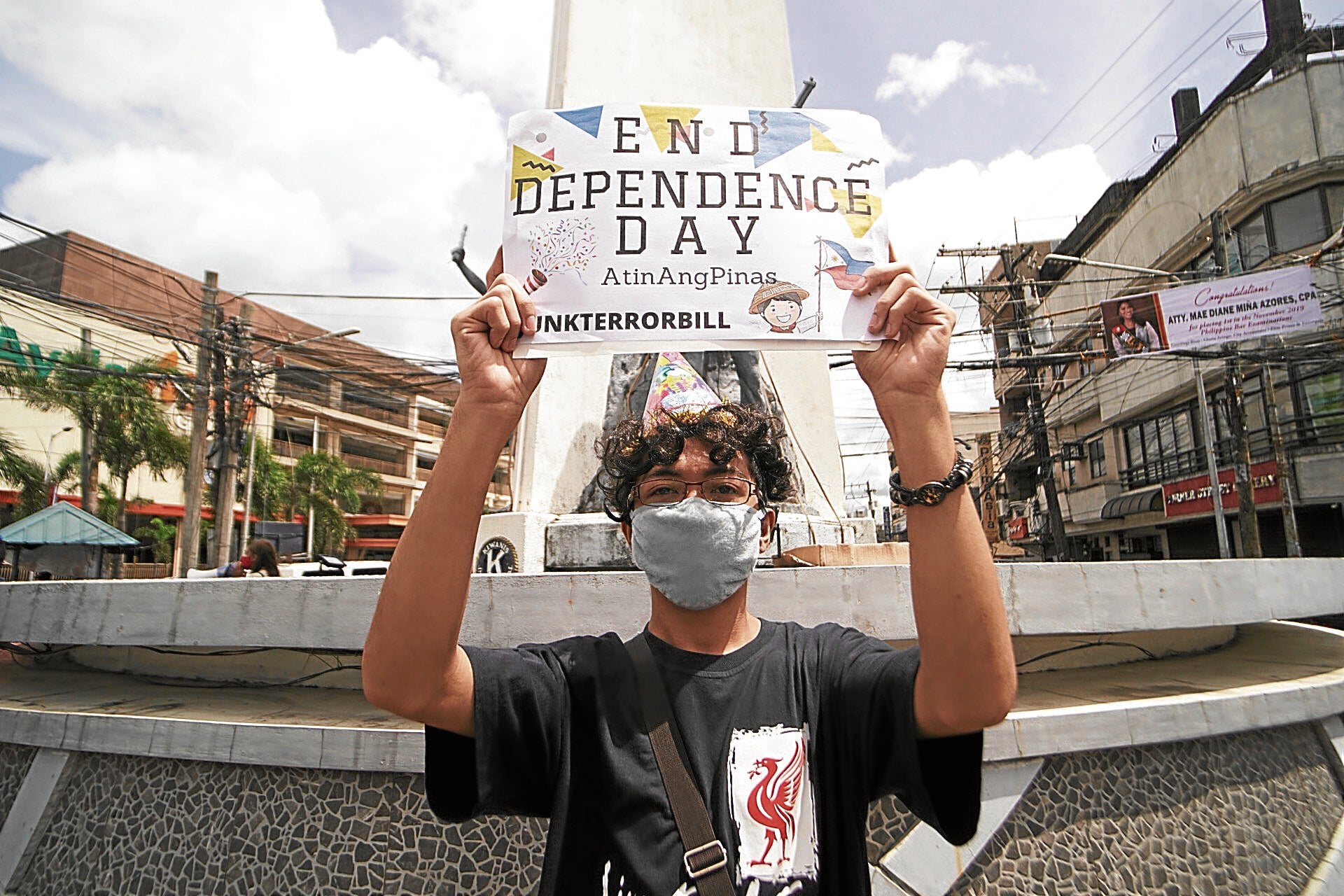 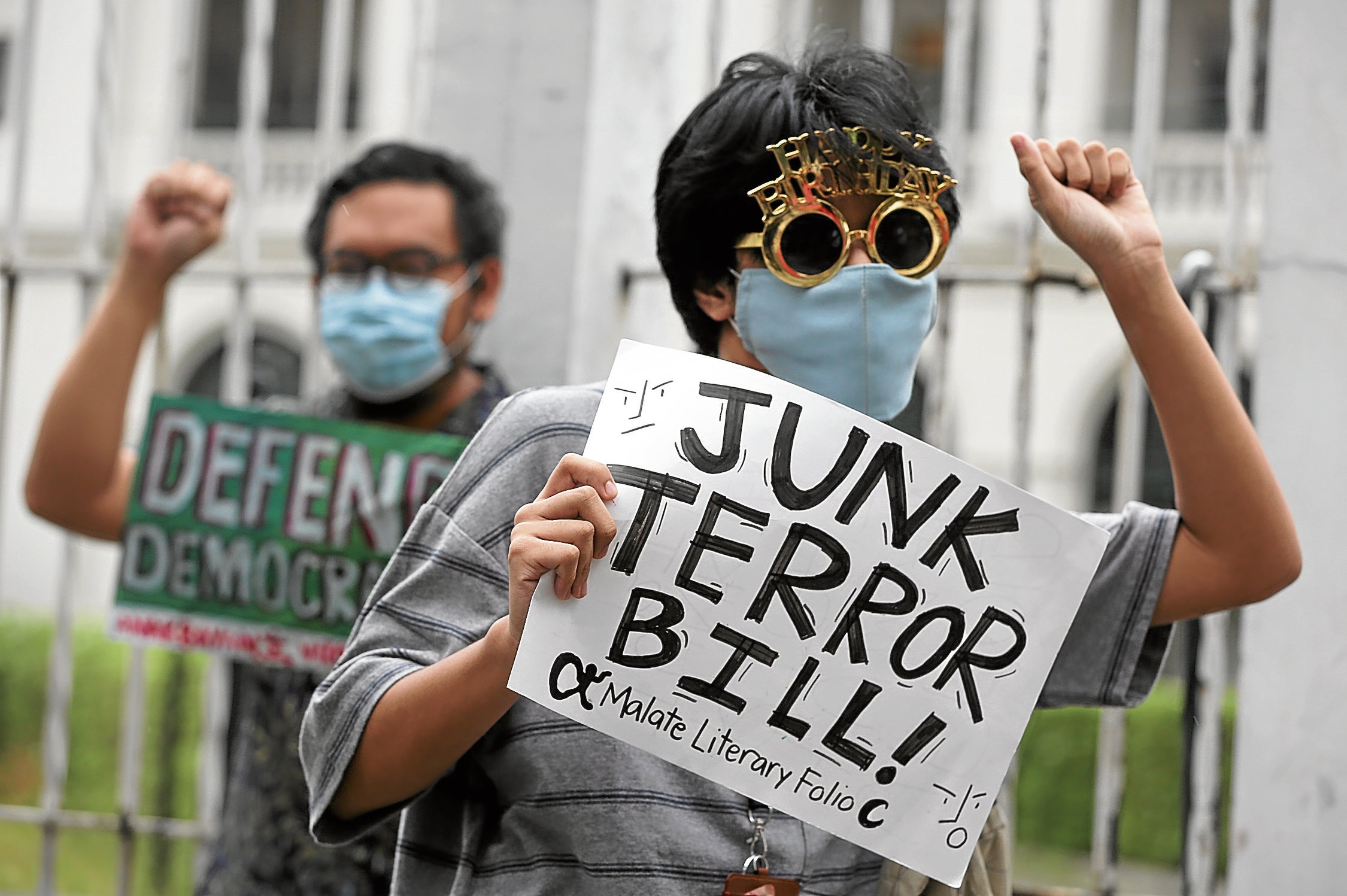 Under the 1982 Soto-Enrile Accord, the police and military are barred from entering UP campuses without prior notice to university officials.

UP Diliman chancellor Fidel Nemenzo said there was no arrangement with the police regarding checkpoints around the campus.

“We asked that the checkpoints be removed, but these were in areas outside UP jurisdiction. Our only arrangement is to remind them of the UP-[Department of Defense] agreement that police shall not enter the campus,” Nemenzo said.

Former Quezon Rep. Erin Tañada said about 40 policemen in fatigues were seen posted outside the campus gates during the rally.

At nearby St. Scholastica’s College on Leon Guinto Street, about a dozen Benedictine sisters also held their own mañanita protest rally.

Similar protests were held in Baguio City, Cebu City and other urban centers across the country. —WITH REPORTS FROM NIKKA G. VALENZUELA, JULIE M. AURELIO, DJ YAP AND MELVIN GASCON