Aid for Silvertino came too late 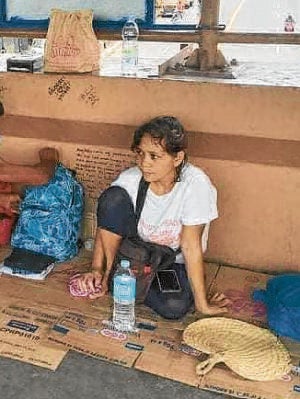 The Department of Social Welfare and Development (DSWD) has extended P15,400 in cash aid to the family of Michelle Silvertino, but she will not be able to enjoy it anymore.

Silvertino, a 33-year-old single mother, was declared dead on arrival at the Pasay City General Hospital at 5:26 p.m. on June 5 after waiting at a covered footbridge for five days for a ride home to Bicol. Her death certificate said Michelle, who left behind four children, was a probable (severe) new coronavirus disease (COVID-19) case.

The DSWD said that Silvertino was a beneficiary of the government’s flagship anti-poverty program, the Pantawid Pamilyang Pilipino Program (4Ps). As a 4Ps beneficiary, she and her family also qualified for the emergency cash aid program under the Social Amelioration Program.

The DSWD would also process the change in grantee form, to ensure that Silvertino’s family would continue to receive benefits from the 4Ps.

Michelle’s remains were buried on June 7 at the Pasay City public cemetery.

But Michelle’s family and loved ones would have to wait “between three to five years” before her remains could be exhumed and brought to Camarines Sur, Pasay Mayor Emi Calixto-Rubiano said on Friday.

Under Section 5 of Presidential Decree No. 856, or the Sanitation Code of the Philippines, the disinterment of the remains of people who died of noncommunicable disease can only be granted if they have been buried for at least three years; and five years if they died of communicable diseases.

Silvertino’s grave was initially only cemented over and marked by handwriting. But as of Friday, however, the Pasay City government has fixed her burial site and placed a marble tombstone to memorialize the former overseas Filipino worker.

Rubiano promised her family that the city government “would tend to their relative’s grave until they decide to have the remains transferred to the province.”

They also reached out to Michelle’s mother, Marlyn, to extend the city government’s assistance and to connect Michelle’s children to a civic organization that can fund her orphaned children’s education.