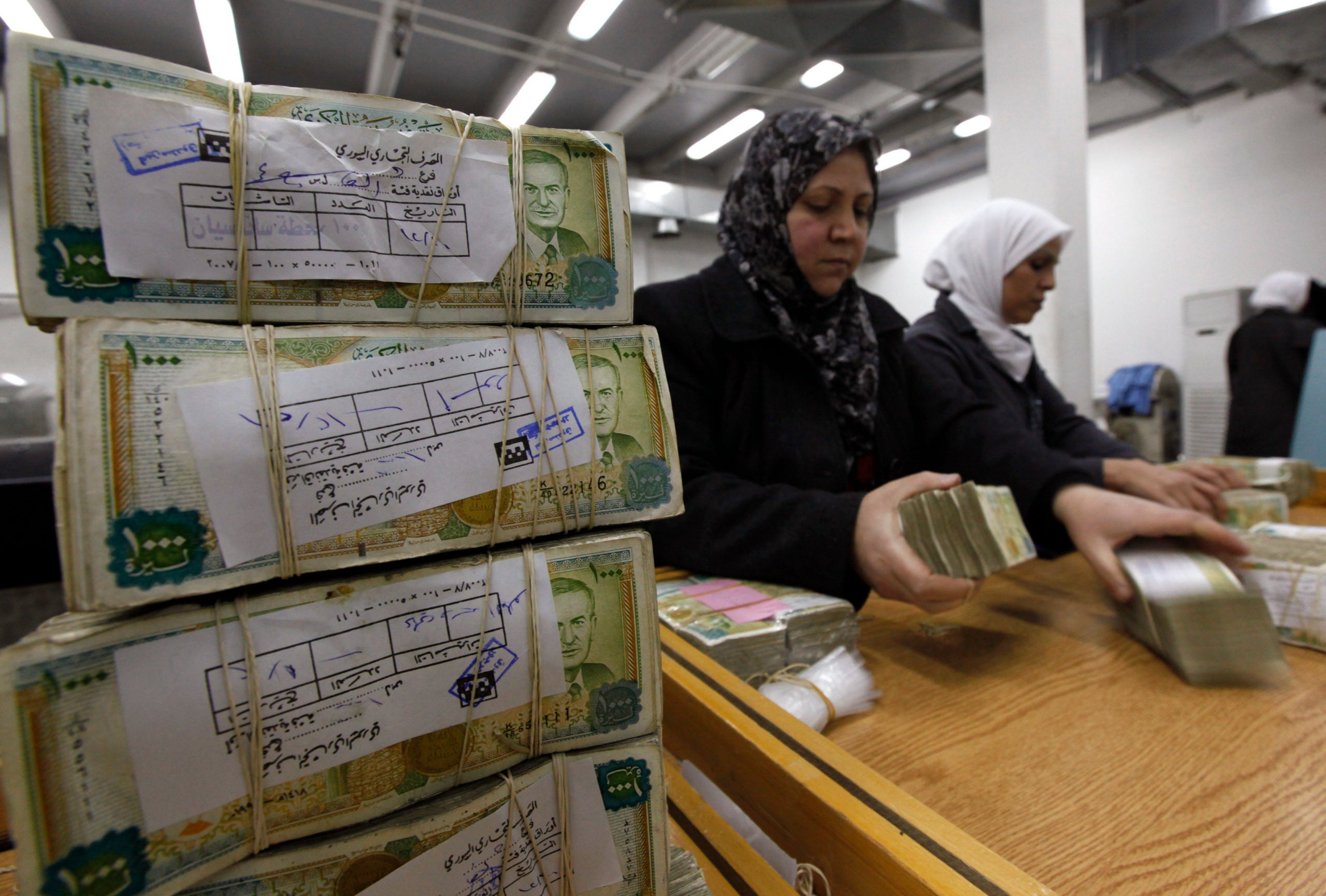 FILE – In this January 13, 2010 file photo, Syrian employees stack packets of Syrian currency in the Central Syrian Bank in, Damascus, Syria. In Syria nowadays, there is an impending fear that all doors are closing. After nearly a decade of war, the country is crumbling under the weight of years-long western sanctions, government corruption and infighting, a pandemic and an economic downslide made worse by the financial crisis in Lebanon, Syria’s main link with the outside world. (AP Photo/Hussein Malla, File)

BEIRUT  — In scenes not witnessed for years in government-controlled parts of Syria, dozens of men and women marched through the streets this week, protesting a sharp increase in prices and collapse of the currency, some even calling for the downfall of President Bashar Assad and his ruling Baath party.

“He who starves his people is a traitor,” some of the protesters chanted at the protest in the southern city of Sweida.

In Syria nowadays, there is an impending fear that all doors are closing. After nearly a decade of war, the country is crumbling under the weight of years-long Western sanctions, government corruption and infighting, a pandemic, and an economic downslide made worse by the financial crisis in Lebanon, Syria’s main link with the outside world.

Syria faces near-complete isolation as the toughest U.S. sanctions yet start to come into effect

next week. While Assad may have won the military war against his opponents with the help of allies Russia and Iran, he now faces an even bigger challenge of governing while more than 80% of his people live in poverty.

In government-held areas, prices go up several times a day, forcing many shops to close, unable to keep up with the chaos. This week the Syrian currency dropped to a record 3,500 pounds to the dollar on the black market — compared to 700 at the beginning of the year. Some staples such as sugar, rice, and medicine are becoming hard to find.

“The Syrian economy has spiraled out of control and the regime cannot control the Syrian pound anymore,” said Osama Kadi, a Canada-based Syrian economic adviser.

The pain is likely to grow under the new U.S. sanctions, which Washington says aim to punish Assad and his top lieutenants for crimes committed during the country’s conflict.

Effectively, the sanctions prevent anyone around the world from doing business with Syrian officials or state institutions or participate in the war-ravaged country’s reconstruction. They also target anyone involved in smuggling to Syria, mostly from Iraq and Lebanon.

The U.S. has already imposed sanctions on Assad and a number of his top officials. The new authority, known as the U.S. Caesar Syria Civilian Protection Act, allows foreign companies to be targeted, including in neighboring Lebanon, Jordan, and Iraq.

“This legislation will close all the doors on the Syrian regime and any person that deals with it,” said Nizar Zakka, a Lebanese citizen who is a member of the Caesar Act team, a group that advises U.S. authorities on implementing the sanctions.

The first wave of sanctions will be imposed on June 17. Three other stages will follow before the end of August, he said.

Caesar is the code name of a Syrian forensic photographer who graphically exposed the brutality of the government crackdown by smuggling out thousands of photos of torture victims.

Experts say the new sanctions will be a heavy blow to a country where 80% of the population already live below the poverty line, making less than $100 a month, according to the United Nations. The Syrian government called the sanctions “economic terrorism.”

Some of the repercussions have already been profound.

Bread prices increased by nearly 60% in the rebel-held northwestern province of Idlib, even though the territory is not included in the new sanctions. Its population, many of them unemployed and living in displaced camps, have also been hit hard by the collapse of the pound since it is the main currency used in Idlib.

As a result, protests erupted this week calling for the ouster of the “Salvation Government” administering Idlib, led by al-Qaida-linked Hayat Tahrir al-Sham.

The Syrian pound — which had been at 47 to the dollar at the start of the conflict — had held steady at around 500 to the dollar from 2014 until last year.

It started crumbling from a number of factors: the coronavirus lockdown, Lebanon’s financial crisis, new rules requiring the use of the Syrian pound, and a feud between Assad and his cousin Rami Makhlouf, one of Syria’s richest men.

The Syrian government has lost major income from resources in areas outside its control, including oil fields in the east held by U.S.-backed fighters and farmlands that produced much of the country’s wheat.

Most damaging, perhaps, has been the financial turmoil in Lebanon. Banks there have served as a gateway to the world for Syrian businessmen, officials, and average people. Now Lebanon’s tight capital controls lock away billions of dollars in their accounts.

“Lebanon was not only Syria’s economic get-out-of-jail card, but it is the beating heart of Syria’s business community,” Danny Makki, a Britain-based Syrian journalist, and political analyst, wrote recently for the Middle East Institute.

Lebanon is also panicking about losing Syria, particularly the electricity it still buys from the war-torn country. In recent weeks, the Lebanese army has begun closing some smuggling routes to and from Syria where fuel, diesel, medicine, and other goods flow.

Syria and its allies say the Caesar Act aims at starving the Syrian people. The U.S. Embassy in Syria — closed since the beginning of the conflict — tweeted on Sunday: “The regime’s destructive war has crushed the Syrian economy, not U.S. or EU sanctions.”

Amid the turmoil, Assad fired Prime Minister Imad Khamis on Wednesday in a move that appeared aimed at deflecting public anger. Khamis told parliament this week that the government was discussing with allies ways to boost the pound’s value. He said the government was also taking steps to avoid any shortage of pharmaceuticals.

Samer Aftimos, a pharmacist in Damascus, said shortages are already taking place, in part because of people hoarding medicine. Drug companies have stopped supplying some medicines, he said.

Syrian legislator Muhannad Haj Ali, who has been under European and American sanctions for years, said Syria survived past economic crises and will overcome the Caesar Act.

“What the terrorists and the Americans couldn’t take on the battlefield, where we paid with our blood and wounds, they won’t be able to gain politically, no matter how much pressure they exert,” he said.