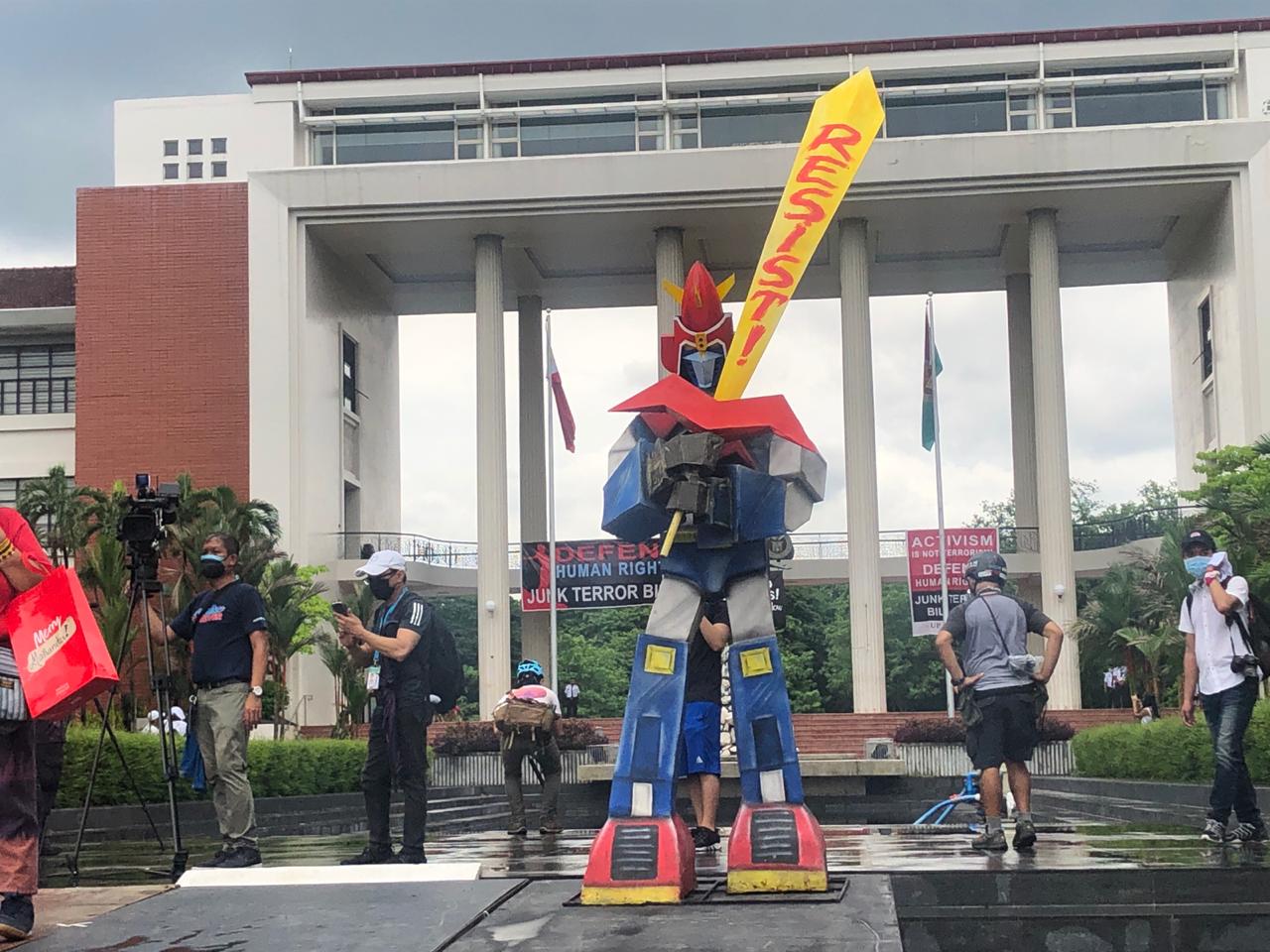 Protesters erect an effigy of 80s Japanese anime robot Voltes V as they hold a protest rally at the University of the Philippines campus in Quezon City. (Photo by Noy Morcoso/INQUIRER.net)

MANILA, Philippines — Protesters could not be silenced by the coronavirus pandemic or warnings from authorities on possible arrest as they held protest rallies on the celebration of the Philippine’s 122nd Independence Day.

Various progressive groups gathered at the University of the Philippines campus in Diliman, Quezon City for the “Grand Mañanita” protest, a jab at the May birthday celebration of Maj. Gen. Debold Sinas, director of the National Capital Region Police Office (NCRPO). 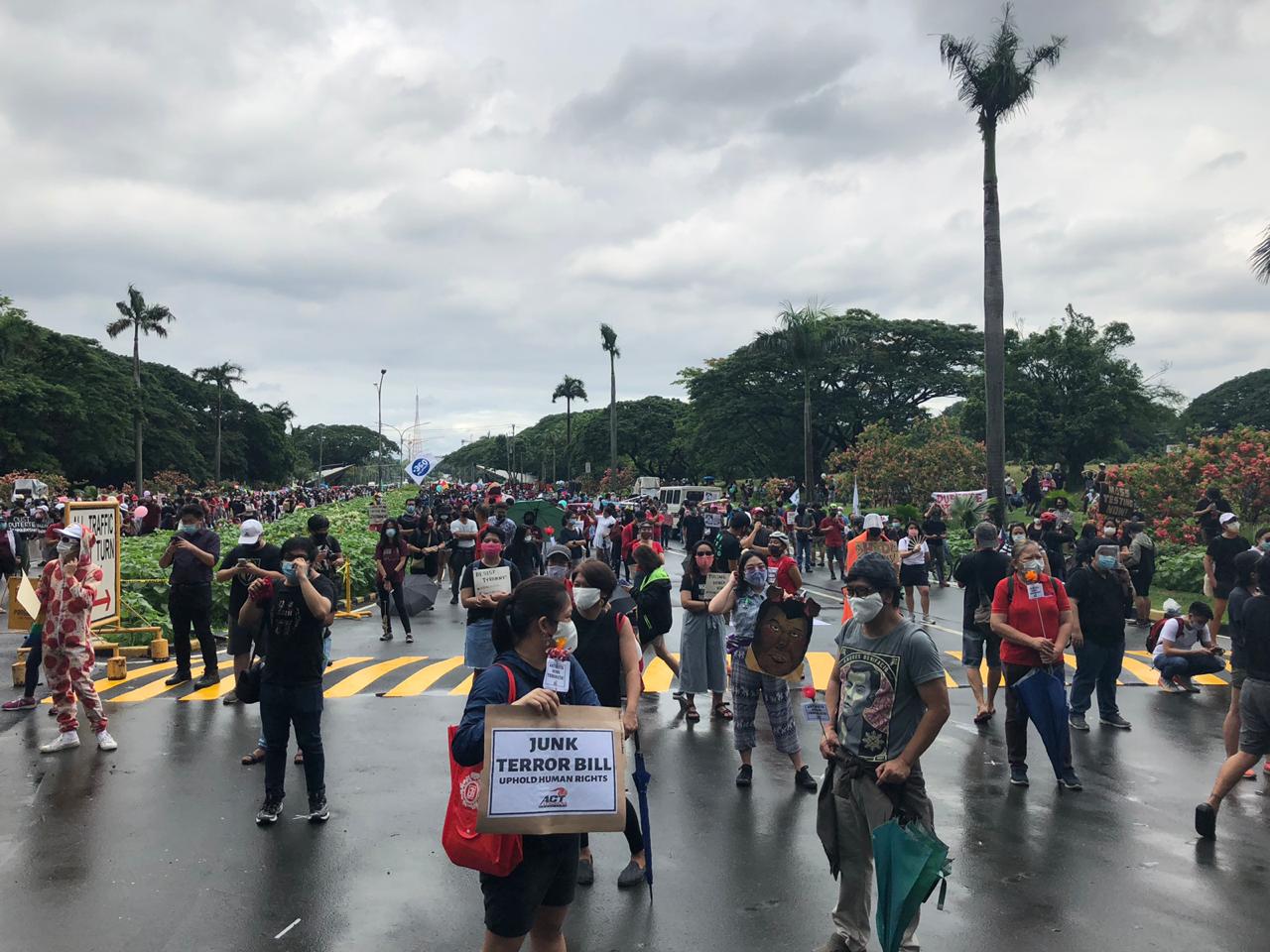 Protesters wear black shirts during the “Grand Mañanita” rally at the University of the Philippines Diliman University Avenue on Independence Day to show objection to the controversial anti-terror bill. (Photo by Cathrine Gonzales/INQUIRER.net)

Sinas’ mañanita which was attended by dozens of police officers, violated the ban on mass gatherings as ordered by quarantine protocols. However, despite this, he was able to keep his post.

Rallyists are expected to hold protests on two main issues: the controversial anti-terror bill which is now only waiting for the signature of President Rodrigo Duterte to be enforced as law, and the government’s supposed lack of sufficient response to the ongoing coronavirus disease (COVID-19) crisis.

Among the groups that lead the grand “mañanita” protest include the Congress of Teachers/Educators for Nationalism and Democracy, Movement Against Tyranny, Gabriela Youth, Anakbayan – Albertus Magnus, Kilusang Mayo Uno Metro Manila, Concerned Artists of the Philippines(CAP), College Editors Guild of the Philippines (CEGP), and Anakpawis Partylist among others. 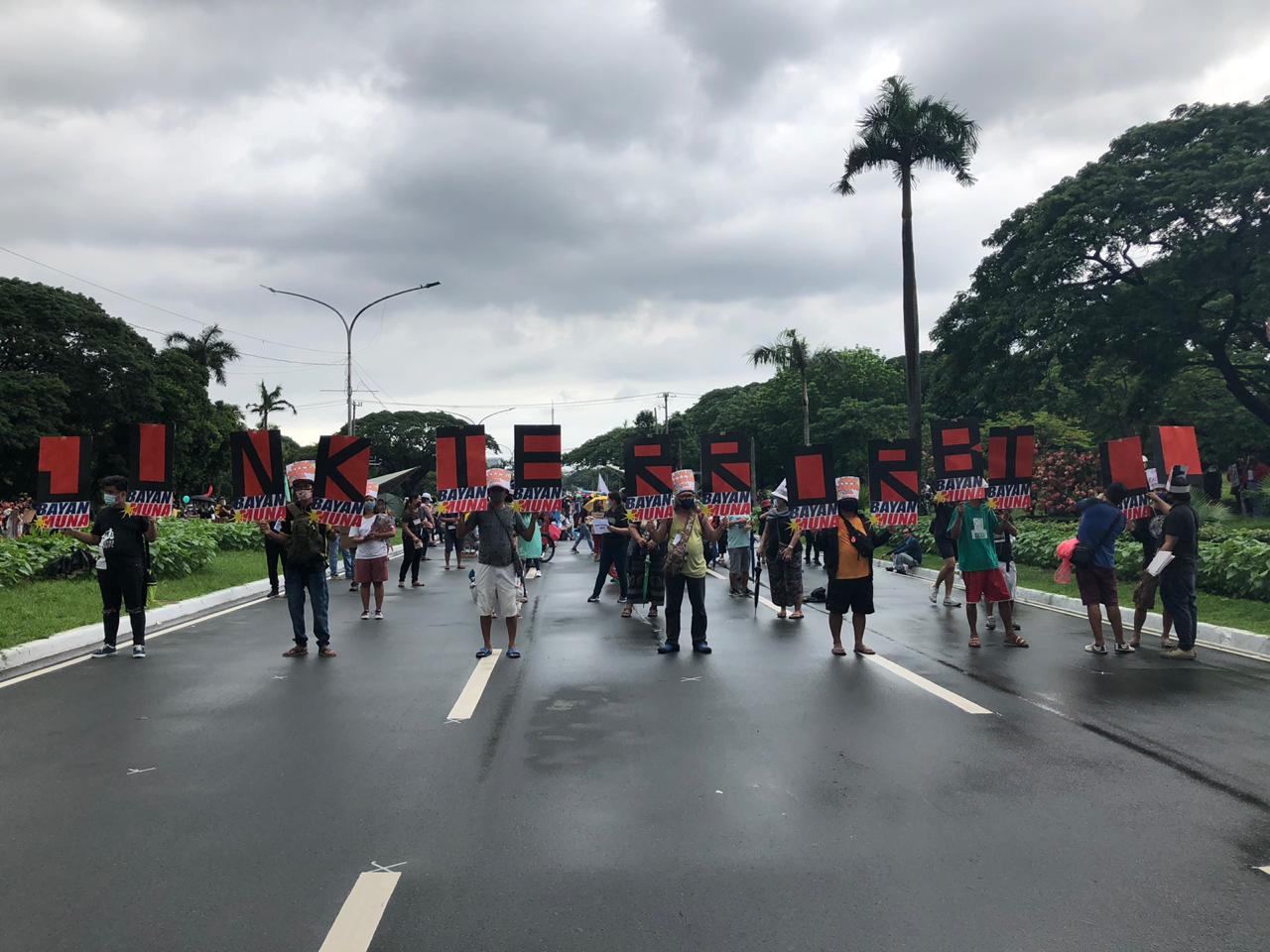 Rallyists observe physical distancing while participating a protest at UP Diliman University Avenue on Independence Day 2020. (Photo by Cathrine Gonzales/INQUIRER.net)

Rain poured briefly just minutes before the program started at 10 a.m., as tropical depression Butchoy threatens to bring scattered rain and thunderstorms in some parts of the country. 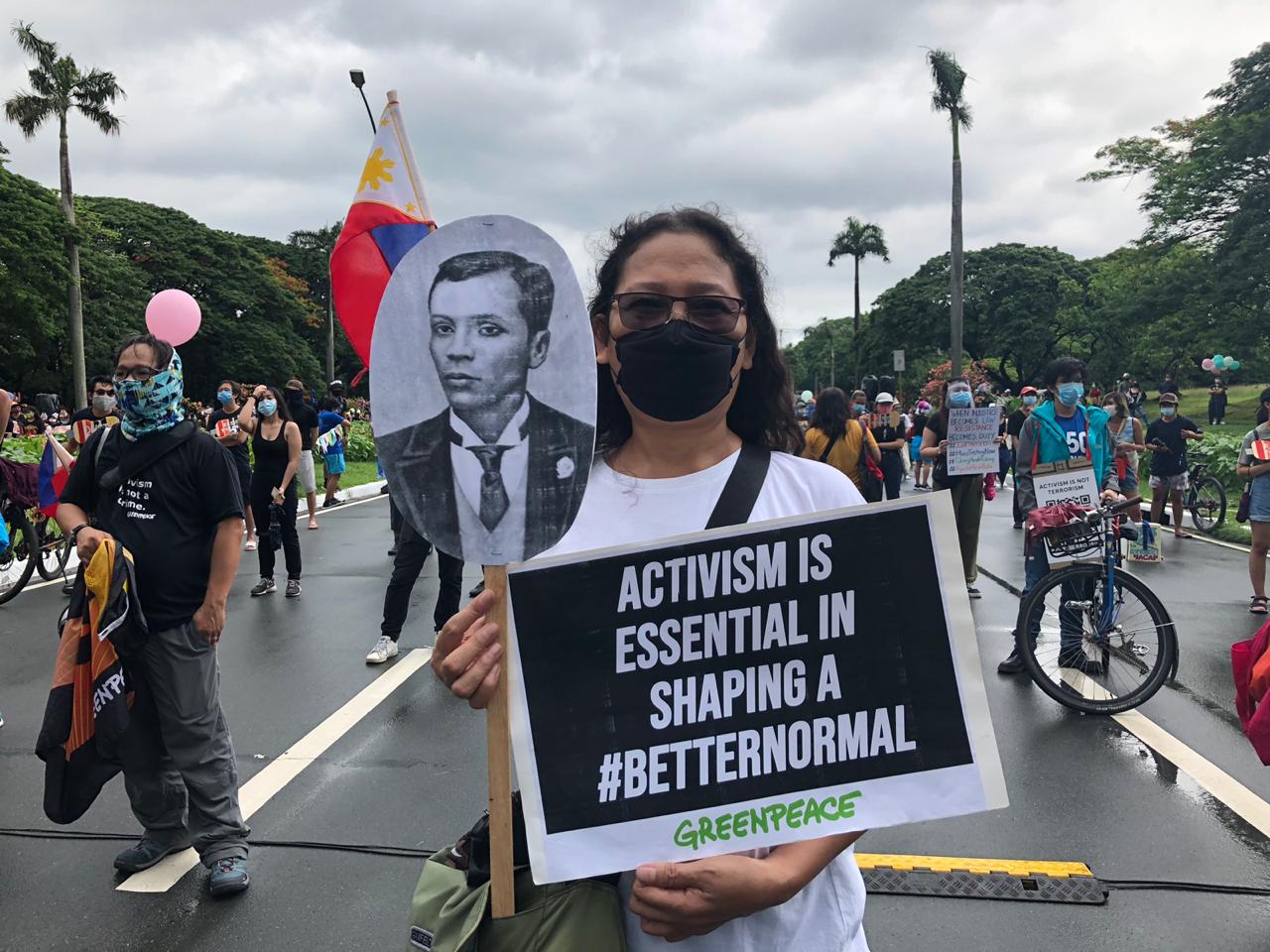 A woman holds a plackard saying “activism is essential in shaping a better normal,” as authorities warned that parcipants of physical protests during community quarantine risk arrest. (Photo by Cathrine Gonzales/INQUIRER.net)

On the eve of the Independence Day protests, the Department of Justice warned that physical protest rallies are “temporarily banned” during the pandemic because of public health concerns.

“Solely for public health reasons and nothing else, mass gatherings, including protest rallies, are temporarily banned to avoid direct transmission of the COVID-19 virus,” Justice Secretary Menardo Guevarra said in a message to reporters on Thursday. 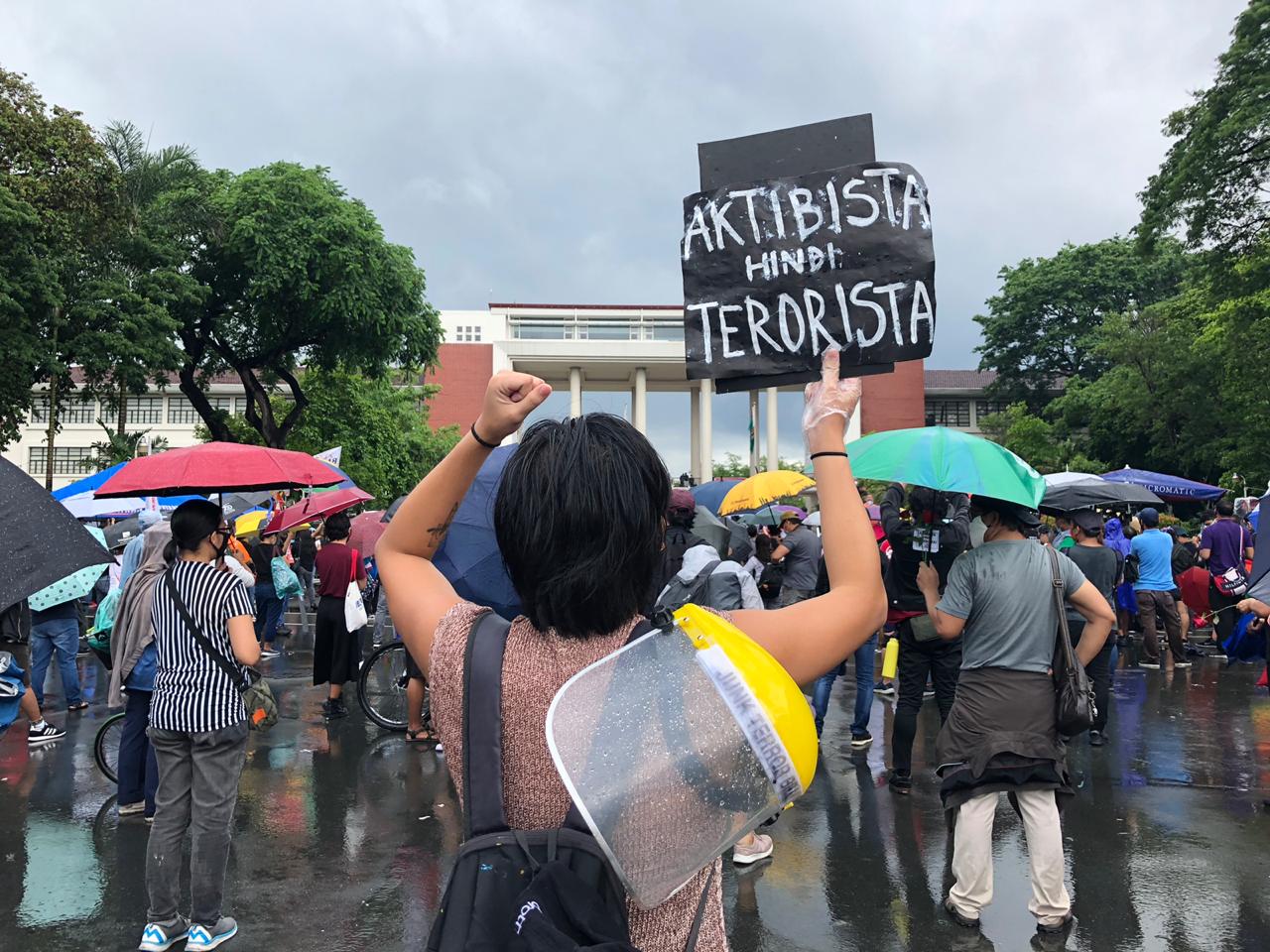 “Violations may give rise to penal sanctions under existing public health laws, not under criminal laws. As (Interior) Sec. (Eduardo) Año said, there are safer ways to express one’s protest during this period of a public health emergency,” he added.

However, the National Union of People’s Lawyers said the Bayanihan to Heal as One Act and the law on mandatory reporting of notifiable diseases do not have provisions allowing the conduct of arrests because of alleged violations of quarantine rules or a prohibition on mass gatherings.