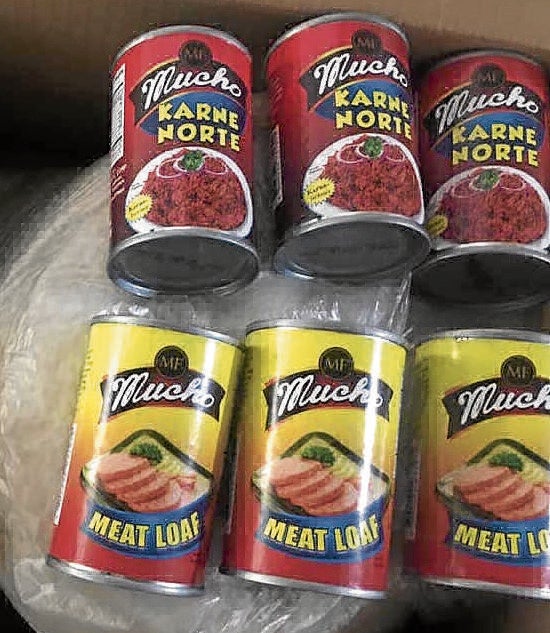 EAT AT YOUR OWN RISK The Food and Drug Administration warned the public against eating MF Mucho products, saying these are unregistered and may pose health risks. —CONTRIBUTED PHOTO

The Food and Drug Administration (FDA) has flagged the local government of Muntinlupa City for distributing to residents canned goods that are not registered with the agency.

In an advisory on Thursday, the FDA warned the public against buying and eating MF Mucho Karne Norte corned beef and MF Mucho Meat Loaf made by Mofels Food International Corp. based in Dasmariñas, Cavite.

In a letter dated June 5 addressed to Mayor Jaime Fresnedi, the agency noted that the two kinds of canned goods were included in relief packs distributed to Muntinlupa students.

FDA director-general Rolando Enrique Domingo said the products had not undergone any evaluation and did not have certificates of product registration.

“Consequently, these products may [pose] health risks to the consumers, especially [as] these are canned good products that require stringent processing to ensure their safety and quality,” he added.

The FDA said it had started its investigation and would impose appropriate administrative sanctions against the manufacturer.

Several residents who received the canned goods as part of the city’s food relief assistance claimed that these were “contaminated” although the city government said that these were not expired.

The Inquirer tried to reach Muntinlupa City information officer Tez Navarro for comment but at press time, she had yet to respond. But there were reports last week that MF Mucho products were no longer being included in relief packs.

According to the social services department, the Muntinlupa government had distributed a total of 163,424 relief packs as of June 9.