Knowing how difficult it is to earn a living these days, one honest delivery service rider used the power of social media to find the owner of a lost wallet which he found on Sunday.

Ruben Velasquez, Jr., a 26-year-old Lalamove rider from Mandaluyong City, was on his way to deliver goods to Green Meadows in Pasig City when he found a lost wallet owned by a security guard named Rolly Caro, while approaching the Boni Avenue tunnel around 8:30 a.m. on June 7.

(The money and some papers from the wallet were scattered on the road, so I picked them up one by one while inside the tunnel.) 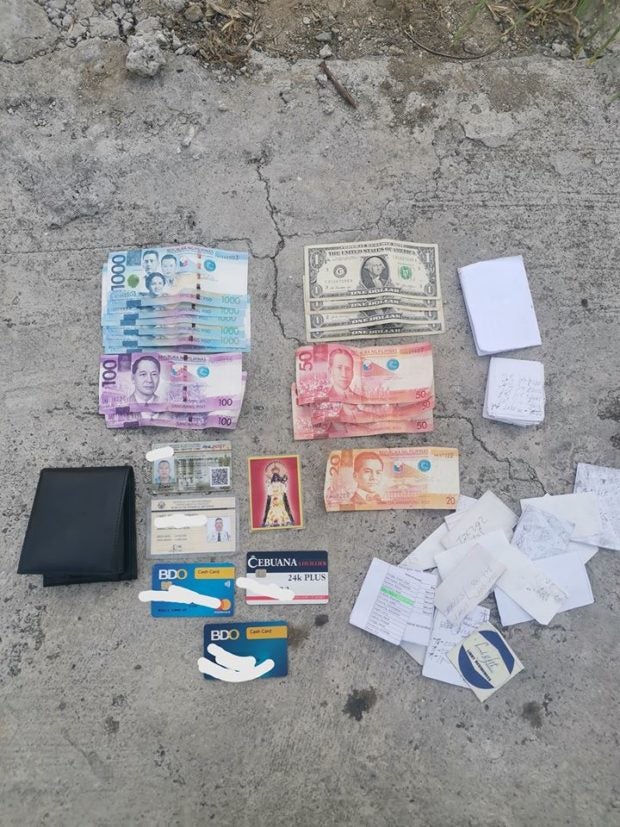 Money, identification cards, ATM cards and some papers inside the lost wallet of Rolly Caro which was found by Ruben Velasquez on Sunday, June 7. Image: courtesy of Muii Angon Velasquez/Facebook

(Honestly, as I was going to the drop-off of my delivery, I was crying while driving because I was sad, thinking about what would happen to this man’s family if he had lost [the wallet] or had it not been returned to him.)

After he did his errands, he stopped and sat down on a sidewalk to check all the contents of Caro’s wallet and look for his contact information.

Velasquez also took photos of Caro’s identification cards and made sure to cover some confidential parts of it prior to posting on social media, to easily find help in case anyone knows Caro or where he lives.

After an hour, Velasquez received messages from people who know Caro personally and told him that he works as a security guard in SMDC Light Residences in Mandaluyong City. He then quickly went back to Mandaluyong as soon as he found out that Caro is on duty that day.

“Sobrang pasasalamat ni Kuya Rolly, halos namumugto na ang mata na para bang naiiyak na [nang maibalik ko ang kanyang pitaka],” Velasquez said as he shared his encounter with the owner of the wallet. (Brother Rolly was so grateful that he got teary-eyed, like he was about to cry when I returned his wallet.)

Thankful for Velasquez’s honesty, Caro told him that he will never forget the act of kindness he has done.

Caro’s colleagues also praised Velasquez and told him, “Mabuti ikaw ang nakakuha, paano kung iba, baka hindi na naisauli.” (Good thing you were the one who found [his wallet]. If it was somebody else, it may not have been returned.)

The security guard gave him P500 cash reward for what he did, but Velasquez refused to accept the money.

Velasquez shared his story on Facebook where it was commended by netizens and has quickly gone viral, now with over 14,000 likes, 5,100 comments, and over 5,200 shares, as of this writing. On his post, he also thanked his parents who taught him the good deed of returning what is not his and to never steal from anyone. JB