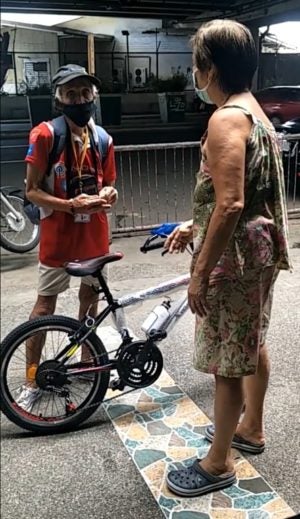 MANILA, Philippines — Carlo Samonte, 87, has been frequenting a bicycle shop in Pasay City every morning and evening looking into a particular bike that he had been dreaming of since the start of the lockdown period.

Samonte, a candy seller in Nichols in Makati, had been asking owner Fe Carandang to buy the MTB bicycle for P2,000, instead of its original price P4,800 since May 15.

“Everyday, early in the morning and around 11 p.m. in the evening before he goes home to Villamor, he would pass by our store,” Carandang, one of the owners of Carbs motorcycle, a bike and accessories shop on Andrews Avenue in Pasay.

Samonte walks everyday from his home to Makati as a vendor and was reportedly taking tricycles before the enhanced community quarantine. “I don’t know his name until today, but drivers told us he was a regular rider of tricycles,” she said,

On Wednesday, around 11:30 a.m., before going to Makati to sell candies, he got the shock of his life when Carandang gave the bike to him for free.

“He was asking me again to sell it for P2,000. Pwede daw bang P2,000 na lang? When he handed me the money and asked for a receipt, I returned it to him and told him, we’re giving it to him for free,” Carandang said.

Samonte was all smiles, Carandang said, when finally, he could bring his new bike to work.

Carandang said on Tuesday evening, her family — composed of her eldest son Don, and daughters Donna Balang and Dianna Carandang, both of them serving as personnel of the Philippine Air Force—had decided to give the bike away.

“We decided to give it to him as a gift. Naawa rin kami sa matanda. He was really persistent and hopeful to get the bike. When he returned on Wednesday morning, we were very happy that he came back,” the oldest Carandang said.

Glad with the purchase, Samonte, he said, took off his face mask and personally thanked them.

He had not gone too far, when Carandang called him back to give him a lock for his bike as she was reminded that there had been rising cases of bicycles being stolen.

He also got a helmet.

Carandang, a single mother after her husband died in the 1980s, said her heart goes out for commuters like Samonte.

“At least, for now, he can go home early. He would no longer walk home late,” she said.

On Wednesday, Samonte’s child went to the bike shop to personally thank the owners as the video posted by one of the shop’s employees went viral on social media.

Others have already asked how to extend help to Samonte, while others praised the owner for being “good samaritans.”

For two times now, the family led by Carandang had also been giving relief goods, rice and chicken to sidecar, jeepney and tricycle drivers in Pasay City.

These are small acts of kindness that Carandang have never thought would go a long way.