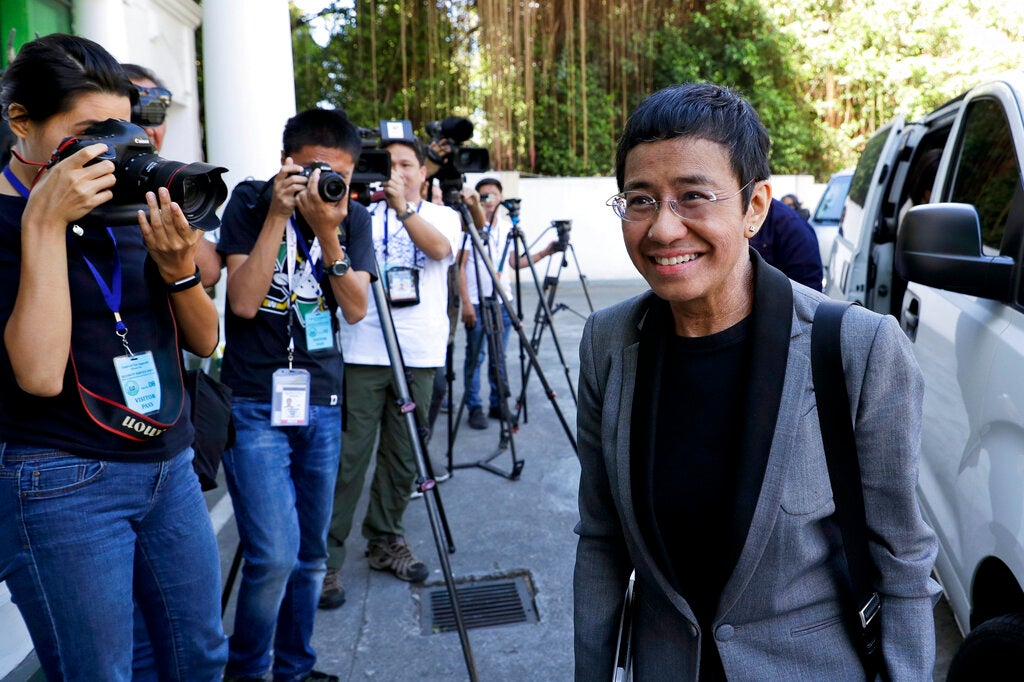 Rappler CEO and Executive Editor Maria Ressa arrives at the Court of Tax Appeals in Quezon City in this April 2019 file photo.  (AP)

VIENNA — An award-winning journalist who has aggressively covered President Rodrigo Duterte’s administration is bracing for a verdict in a libel case and says she sees the upcoming decision as “an existential moment” for democracy in the Philippines.

Maria Ressa, the head of the Rappler online news site, was arrested twice in as many months last year, once for allegedly violating a ban on foreign ownership of news media and once for alleged “cyber libel. The latter was based on a complaint filed by a businessman who accused Rappler of linking him in a 2012 news report to illegal drugs, human trafficking and murder without getting his side or citing evidence.

A Manila court is expected to rule in the case Monday.

“This is an existential moment for us, for our democracy,” Ressa said Wednesday during an online conference call organized by the Vienna-based International Press Institute.

As the verdict nears, journalists worldwide have been rallying behind Ressa, who was named one of Time magazine’s Persons of the Year in 2018 for her work combating fake news.

The International Press Institute said in a statement that the multiple charges brought against Ressa “are a transparent attempt to silence her and shut down Rappler in retaliation for its critical coverage of President Rodrigo Duterte and his administration.”

During the online call, Ressa said she was putting her hope in the judge resisting political pressure, noting that a judge dismissed one libel case against her last year.

“It’s been four years that we’ve been under attack for doing our jobs,” she said. “I think that this is not an easy time for being a journalist, but I think that the mission of journalism has become more important today than ever.”

When asked if she was afraid of going to prison, Ressa said she experiences fear as she faces “the great power of the state, but also anger that I have done nothing wrong but do my job.”

She said she was embracing her fear so “I can take the sting out.”

Ressa, who is CEO and executive editor of Rappler Inc., also pleaded not guilty to charges of breaching the ban on foreign ownership and control of media outlets in the Philippines. She and some media watchdogs described the charges as an attempt to muzzle independent media that are critical of the president, particularly over his deadly crackdown against illegal drugs.

The Duterte administration denied Ressa’s legal problems were a press freedom issue, saying she and Rappler should answer before the judicial system like other violators of the law.

Rappler’s Maria Ressa scared but strong ahead of verdict