Stranded woman picked up by cops hours before death 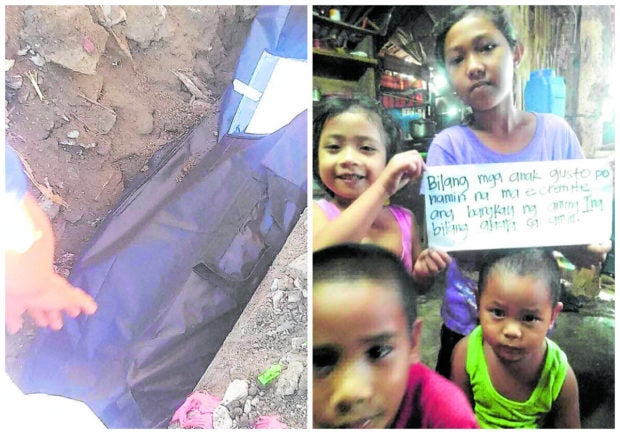 A LONG WAY FROM HOME Michelle Silvertino’s final resting place at a public cemetery in Pasay City. Her children (right photo), however, want her body to be cremated and brought home. —CONTRIBUTED PHOTOS

MANILA, Philippines — The woman who died after being stranded for five days at a footbridge in Pasay City, waiting for a bus to bring her home to Calabanga, Camarines Sur, was picked up by policemen twice, just hours before her death.

Michelle Silvertino, a 33-year-old single mother, was declared dead on arrival at the Pasay City General Hospital (PCGH) at 5:26 p.m. on June 5. The death certificate issued on Monday said that the victim, who left behind four children aged 3 to 11, was a probable (severe) new coronavirus disease (COVID-19) case.

Police Lt. Col. Deanry Francisco, assistant Pasay police chief, confirmed to the Inquirer on Wednesday that Silvertino was picked up at the footbridge by Police Corporals Jumie Josue and Emerson Ilac of the Malibay police substation 6 on the night of June 4.

“They said they were bringing her for treatment to the barangay hall but there was no one there so they took her to the police precinct to let her rest. But upon validation, they saw she had COVID-19 symptoms so their commander told them to bring her back to the barangay hall. But [Silvertino] insisted that she was OK so they returned her to the footbridge,” Francisco said.

He added that after two hours, around 4:30 a.m. on June 5, they received a call, this time from a concerned citizen about an unconscious woman at the footbridge.

A separate police report said that the woman, who turned out to be Silvertino, had a “high fever” and was having “difficulty breathing.”

Francisco said the same policemen went back to the footbridge and took the victim to the hospital.

As for her relatives’ claims that Silvertino’s money totaling P6,000 was missing, Francisco said he had yet to verify the information.

But the day before she died, Silvertino did not sound sick, said Jhimbo Mojica, a sidewalk clearing operative under the city’s environment and natural resources department.

Mojica, who met the victim in the morning of June 3 while clearing the footbridge of street dwellers, was moved by her plight and posted her plea for help on social media which went viral.

Silvertino told him that her employer had brought her to a bus terminal in Cubao on May 31, thinking she would be able to go home to Bicol region the next day under the general community quarantine. When she learned there were no buses, Silvertino said she walked to Pasay City to find a ride.

According to Mojica, he talked to the victim on the phone around 8 p.m. on June 4. “She was excited and happy. She told the street dwellers there that finally, she would see her four children. I did not notice that she was sick. I told her many would like to help her after reading my post and Sir Adrian Martinez would help her go home. I told her to prepare and wait for me on June 5,” he said.

Martinez of the city youth development office who was in charge of making arrangements for stranded people in Pasay City, had already arranged for Silvertino to undergo a swab test on June 6 for her trip back home to Bicol region through buses provided by the office of Vice President Leni Robredo.

Mojica said that around 9:30 p.m. on June 4, Josue texted him to say they were bringing the victim to the police precinct as it was raining hard. The policeman also told him to fetch the victim at the station the following day in preparation for her trip home.

Later, Mojica said he was informed that the police had taken Silvertino back to the footbridge before dawn because she was “crying and could not breathe.”

“I was shocked because I thought she was safe at the police station. I asked the police what happened. They told me they sent her back around 2 a.m. but she already had a fever,” he told the Inquirer.

Silvertino was buried at a public cemetery in the city on June 7 with the consent of her sister. The social and community welfare department paid for her burial and hospital expenses.

In a radio interview, Calabanga Mayor Ed Severo said he was dismayed upon learning about the incident while Councilor Levi Sta. Ana Jr. said he would write to Pasay Mayor Emi Calixto-Rubiano.

According to Rubiano, members of the city’s disaster risk reduction and management office went to check on Silvertino after being advised by the police that she was staying at the footbridge. Her temperature and vital signs were normal and although they offered to bring her to a hospital for a checkup, she refused.

Rubiano said that when they went back in the next days to check on Silvertino, she could not be found possibly because she frequently moved from one place to another.