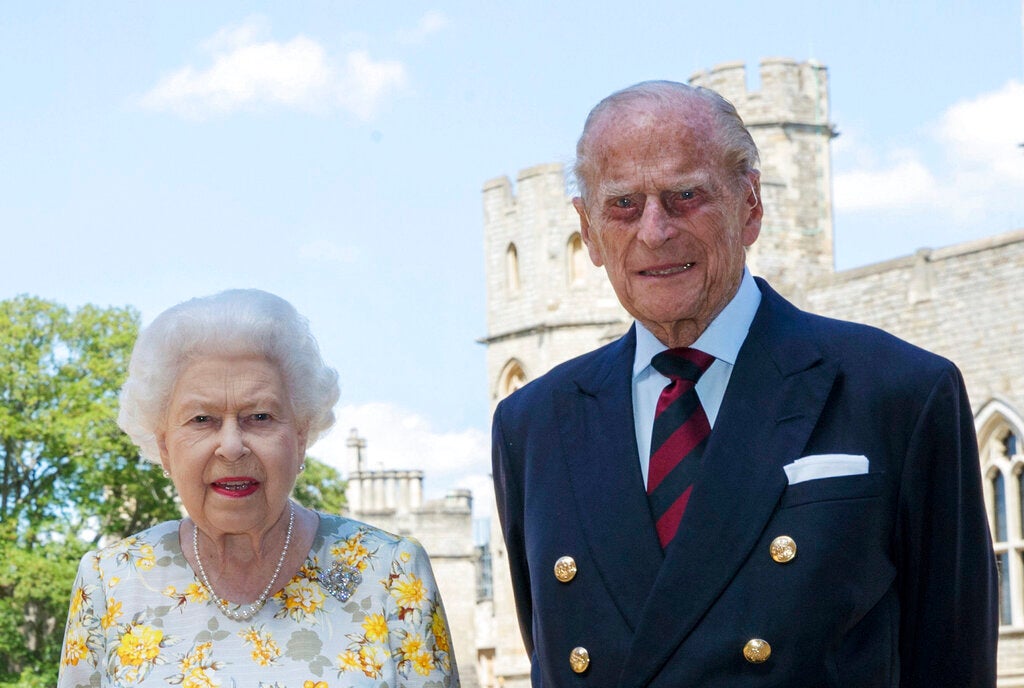 Britain’s Queen Elizabeth II and Prince Philip the Duke of Edinburgh pose for a photo June 1, 2020, in the quadrangle of Windsor Castle, in Windsor, England, ahead of his 99th birthday on Wednesday, June 10. The Queen is wearing an Angela Kelly dress with the Cullinan V diamond brooch, while Prince Philip is wearing a Household Division tie. (Steve Parsons/Pool via AP)

Queen Elizabeth II’s husband Prince Philip marks his 99th birthday on Wednesday, with the royal couple still in lockdown due to the coronavirus outbreak.

The monarch, 94, and her husband of 72 years are maintaining social distancing rules at Windsor Castle, west of London, as their age puts them in a high-risk category for COVID-19.

Buckingham Palace released a new photograph of the couple, which was taken on June 1 in the quadrangle at the castle, to mark his birthday.

In the picture, the monarch is seen wearing a dress by British fashion designer Angela Kelly, who has served as her senior dresser since 2002.

She is also seen with the heart-shaped Cullinan V diamond brooch, which was worn by her grandmother, Queen Mary, at the Delhi Durbar in British-ruled India in 1911.

Philip, in a blazer and grey trousers, is seen wearing a tie of the Household Division, which comprises seven British Army regiments dedicated to serving Queen Elizabeth II.

The aging Duke of Edinburgh, to give him his formal title, is the longest-serving consort in British history, and stepped down from frontline royal duties in May 2017.

In January 2019, he emerged unscathed after his vehicle was involved in a traffic accident that injured two people near the monarch’s Sandringham estate in eastern England.

But he has not been seen in public since spending four nights in hospital in December for what royal officials said was “observation and treatment” for a “pre-existing condition.”

The “precautionary measure” and unspecified condition renewed concerns about his health as he approaches his landmark 100th birthday next year.

Centenarians in Britain typically receive a special birthday card from the queen.

The queen and the duke moved to Windsor in March, effectively to self-isolate, as the coronavirus outbreak took hold, but remain there even as stay-at-home restrictions are eased.

Her grandson, Prince William, in April expressed his concern about their welfare given the risks, and after his father, heir to the throne Prince Charles, contracted the virus.

The monarch celebrated her 94th birthday in April with no fanfare, canceling the traditional gun salute because of the crisis.

She was recently seen riding on the grounds of the castle.

At the height of the coronavirus outbreak, she sent two rare televised messages to the nation, urging solidarity and determination to fight the virus.