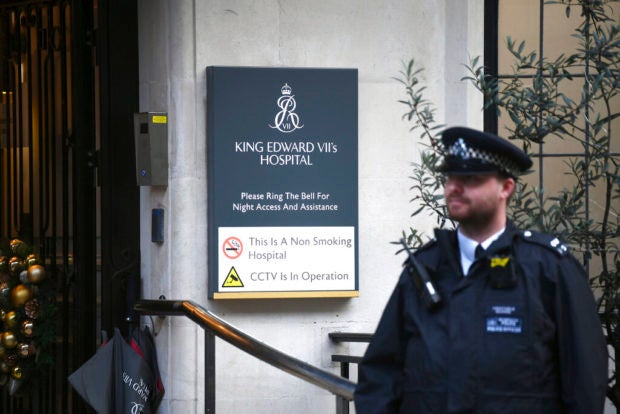 A police officer stands outside King Edward VII’s Hospital, in London, Friday, December 20, 2019. Prince Philip, the husband of Queen Elizabeth II, has been admitted to a London hospital “as a precautionary measure,” Buckingham Palace said Friday. The palace said in a statement the 98-year-old Philip was admitted to the King Edward VII hospital for observation and treatment of a pre-existing condition. – On Tuesday, December 24, 2019, the Duke of Edinburgh leaves the hospital in time to join the royal family for Christmas. (Victoria Jones/PA via AP)

LONDON — Britain’s Prince Philip left a London hospital on Tuesday after a four-night stay that renewed concern about the 98-year-old’s health, in time to join the royal family for Christmas.

Queen Elizabeth II’s husband, dressed in a suit, took a few steps before being helped into a dark green Land Rover parked by a side entrance of the King Edward VII hospital, where he was admitted Friday, an AFP reporter said.

“The Duke of Edinburgh has today left hospital after being discharged by his doctor and is now back at Sandringham,” where the royal family traditionally spends Christmas Day, Buckingham Palace said in a statement.

“His royal highness would like to thank everyone who sent their good wishes.”

Buckingham Palace has released little information about the duke’s health, saying only that he went in for “observation and treatment in relation to a pre-existing condition”.

It stressed that it was a “precautionary measure”.

The duke was reportedly flown there by helicopter from the royal Sandringham estate in eastern England, where he has been based since retiring from public duties in 2017.

The Sun tabloid reported that Philip has suffered a month of ill-health, including a “bad fall” that left him confined to bed for a couple of days.

In recent years, he has been admitted to hospital for abdominal surgery, bladder infections and a blocked coronary artery, while he is also reported to suffer from arthritis in his right wrist.

In January, the duke was involved in a car crash near Sandringham. He pulled out onto the main road, hitting another car and flipping his Land Rover.

A woman in the other car broke her wrist, for which Philip apologized. He subsequently gave up his driving license but faced no further action.