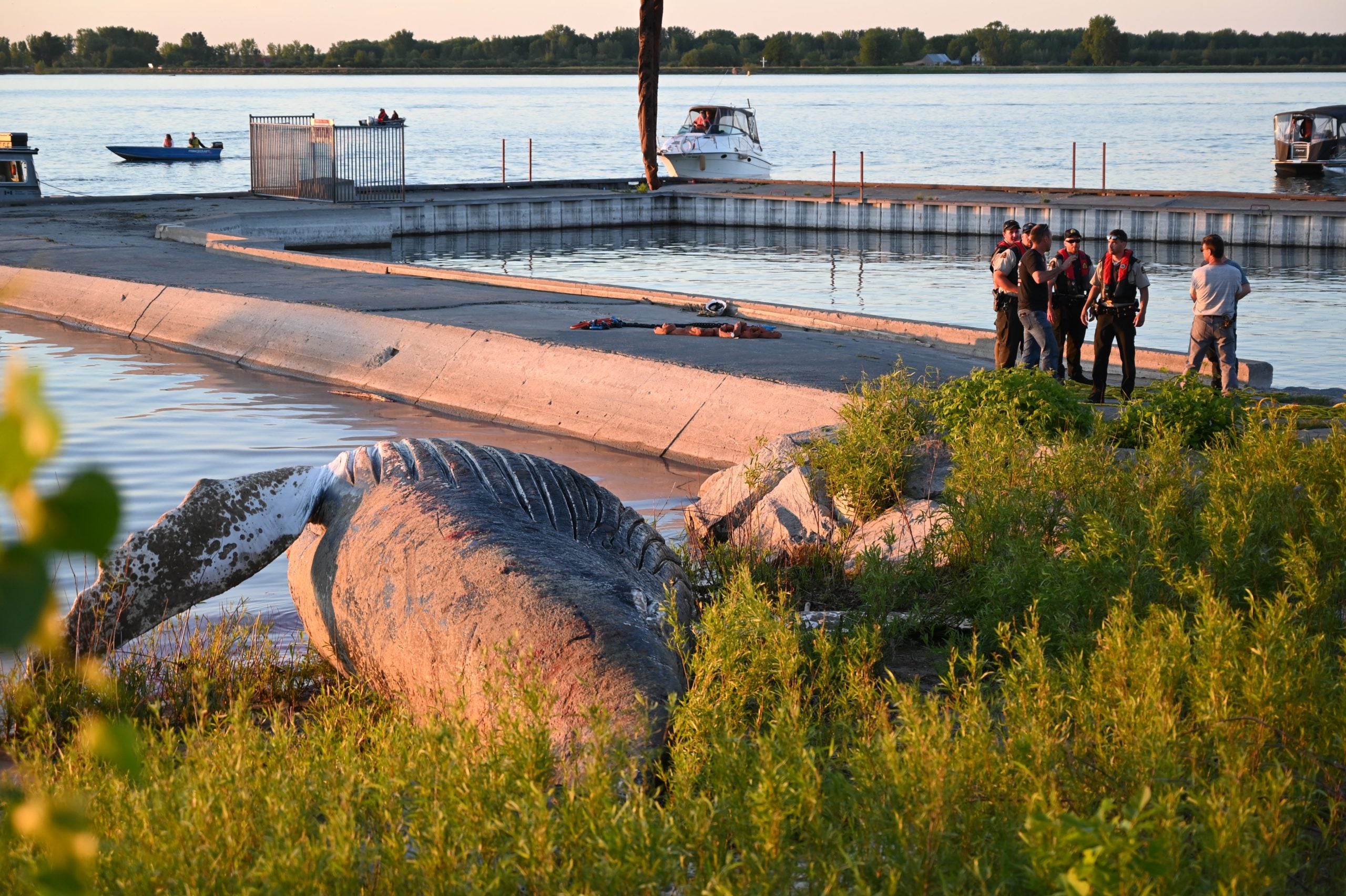 The body of a young humpback whale is lying on the shore, cordoned off by the police during the evening of June 9, 2020 in Sainte-Anne-de-Sorel (90 km east of Montreal), Quebec, where it was towed after being found east of Montreal in the morning hours. – A necropsy is due to take place on June 10. The young humpback whale that swam up one of Canada’s major rivers, delighting Montrealers who packed the shores for a glimpse of the first of the species in local waters, is believed to have died, wildlife officials said June 9. (Photo by Eric THOMAS / AFP)

SOREL, Canada — A young humpback whale that swam up one of Canada’s major rivers, delighting Montrealers who packed the shores for a glimpse of the first of the species in local waters, has died.

The pilot of a passing commercial ship spotted a “whale carcass” near Varennes in Quebec province, about 20 kilometers (12 miles) east of Montreal, Marie-Eve Muller of the Quebec Emergency Network for Marine Mammals (RQUMM) told AFP on Tuesday.

The body was towed by the Canadian fisheries department to Sorel, 80 kilometers east of Montreal, where it was lifted onto shore with the help of a giant crane.

“It is very likely that it is the same whale observed near Montreal a few days ago,” Muller said.

The giant creature had been seen last week swimming in the Saint Lawrence river, diving against the backdrop of the Montreal skyline.

The two- to three-year-old cetacean had appeared healthy from a distance, and scientists hoped it would head back to the estuary and the Gulf of Saint Lawrence, more than 400 kilometers away.

The pilot of the boat, who discovered the carcass, told Radio Canada he had not “seen any blood or deformation”, which would indicate the possibility of a collision with a ship.

A team comprised of RQUMM, federal fisheries and University of Montreal veterinary medicine officials was headed to the site “to learn more.”

A necropsy has been planned to determine the cause of death.

Local media, citing experts, speculated that the whale may have been struck by a cargo ship or ran aground in shallow waters.

Humpback whales live near both the Arctic and Antarctic, with adults growing up to 17 meters and weighing up to 40 tonnes.

Each pod spends the summer near the poles and travels to tropical areas in their respective hemispheres during the winter to breed.

The Montreal visitor was likely led astray while chasing prey, or made a navigation error, Muller said on Sunday.

It was the first humpback whale to be observed in these parts.

“There have previously been reports of minke whales or beluga whales, but never for this species,” said RQUMM.