To wear or not to wear: Confusion reigns as UN scrambles mask, virus spread advice 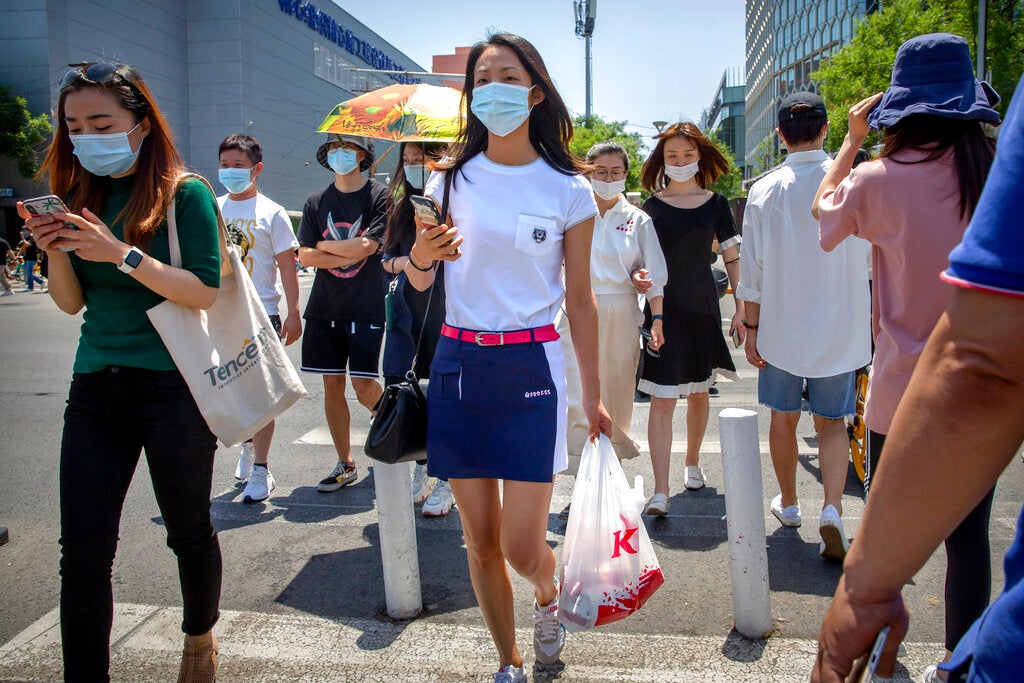 People wear face masks to protect against the coronavirus as they walk across an intersection in Beijing. (AP)

LONDON — It’s an issue that’s been argued about for months, both by experts and by people strolling through parks all over the world: Can people who don’t feel sick spread the coronavirus, and if so should we all be wearing masks to stop it?

Even the World Health Organization can’t seem to get it straight. On Tuesday the U.N. health agency scrambled to explain seemingly contradictory comments it has made in recent days about the two related issues.

The confusion and mixed messages only make controlling the pandemic that much more difficult, experts say.

“If you are giving them confusing messages or they’re not convinced about why they should do something, like wear masks, they will just ignore you,” said Ivo Vlaev, a professor of behavioral sciences at the University of Warwick.

The communications debacle highlighted WHO’s change to its longstanding mask advice — a revision that was made months after many other organizations and countries already recommended people don masks.

On Friday, WHO changed its mask advice, recommending that people wear fabric masks if they could not maintain social distancing, if they were over age 60 or had underlying medical conditions. Part of the reasoning, WHO officials said, was to account for the possibility that transmission could occur from people who had the disease but weren’t yet symptomatic.

But when Maria Van Kerkhove, WHO’s technical lead on COVID-19 was asked about the frequency of this kind of transmission this week, she said “It still appears to be rare that asymptomatic individuals actually transmit onward.”

On Tuesday, Van Kerkhove said she was referring to a few studies, not the complete picture.

Still, many other scientists were stunned by the description of asymptomatic spread as “rare,” saying plenty of evidence exists that people can spread the disease before suffering symptoms.

“I was surprised by the conviction of that statement because there have clearly been people who have transmitted the infection before they go on to develop symptoms,” said Keith Neal, an infectious diseases expert at the University of Nottingham who has advised the U.K. government on outbreak control.

The details on how well the coronavirus spreads in different circumstances are not well understood, and are still being studied. But here’s what scientists say and experts recommend based on what is known:

CAN PEOPLE WHO DON’T FEEL SICK SPREAD THE DISEASE?

We don’t know. WHO has maintained for months that the vast majority of COVID-19 spread is from people with symptoms like a fever or cough, and that transmission from people who don’t feel sick is not thought to be a major driver of the disease.

At a hastily arranged social media event Tuesday to try to clear up confusion, WHO’s emergencies chief, Dr. Michael Ryan, said “both symptomatic and asymptomatic individuals are part of the transmission cycle” but that it was unclear how much each contributed to disease spread.

DOES WEARING A MASK HELP?

Probably. Wearing a mask might not protect you from getting sick— your eyes are likely still exposed — but health experts think that it may prevent you from spreading the disease unknowingly by acting as a physical barrier.

COVID-19 is spread via respiratory droplets, so wearing a mask will stop those droplets from reaching others. While most spread is thought to happen by coughing and sneezing, Ryan said there is some suggestion that even acts like singing or shouting could spread the virus from people who don’t yet show symptoms.

WHY DON’T WE KNOW FOR SURE?

It’s complicated, especially since the virus was only identified in late December. Some scientists said WHO’s distinction between people who are truly asymptomatic — those who are infected by COVID-19 but never show symptoms — and those who are pre-symptomatic and develop symptoms later — is part of the problem.

While truly asymptomatic people are likely not responsible for significant virus spread, several studies have documented people spreading the disease before they get sick — and some experts say recognizing and stopping this kind of transmission is critical to controlling the pandemic.

Detailed studies and testing of people who test positive for the coronavirus but don’t show symptoms to determine if they spread the disease are needed — and few have been done so far.

WHY CAN’T THE SCIENTISTS AGREE?

Although numerous studies have suggested people can spread the virus before they show symptoms, WHO has largely dismissed those as anecdotal or pointed out that they were based on modelling.

Babak Javid, an infectious diseases doctor at Cambridge University Hospital, says many scientists are persuaded by the studies published so far and think WHO should publish the data it is citing to explain why it believes transmission of the disease in people without symptoms is “rare.”

“If you’re going to make a really important statement like that, it would be good to back it up,” Javid said. “I think WHO is an important organization, but they’ve made a lot of statements that have been misleading.”

WHO’s Ryan said the agency was committed to being honest and transparent and welcomed the scientific debate it has prompted.