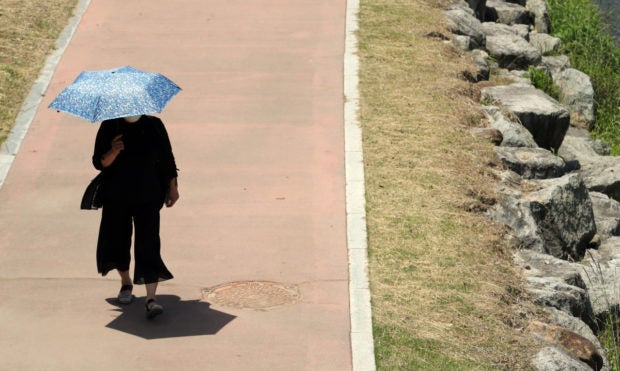 BEIJING — The summer weather has officially arrived, and on Tuesday Seoul got its first heat wave advisory of the year.

“A lot of regions will see their maximum sensory temperature for the day exceed 33 degrees Celsius through Wednesday while a number of regions, including Seoul, are issued heat wave alerts,” the KMA said.

A heat wave advisory is issued when the daytime high is expected to reach 33 degrees Celsius for two consecutive days. A warning, stronger than an advisory, is issued when the forecast temperature is 35 degrees Celsius or higher. The KMA’s alert system was revised recently to take humidity into account and reflect how hot the weather feels. Previously, alerts were based solely on actual air temperatures.

The season’s first hot weather alert was issued Sunday for Daegu and a number of other regions in the central part of the country. The first warning was issued Monday for Gyeongsan, North Gyeongsang Province, where the temperature hit 37.5 degrees Celsius.

While the monsoon season is expected to start later this month, the KMA said rainclouds were approaching Jeju Island, which might experience its rainy season before the rest of the country.

The authorities are heightening precautions against COVID-19 for the summer, warning that the pandemic is not over.

Earlier this month the Ministry of Food and Drug Safety fast-tracked approval for a new type of face mask designed for summertime use for healthy people in low-risk settings. The manufacturer, Wellkeeps, said earlier that the new summer masks would hit the shelves nationwide later this month.