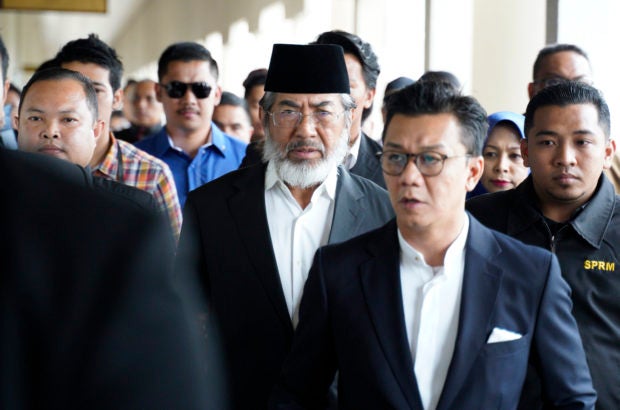 In this Monday, Nov. 5, 2018, file photo, former chief minister of Saba state on Borneo island, Musa Aman, center, arrives at the High Court in Kuala Lumpur, Malaysia. Musa Aman was among several senior politicians from the United Malays National Organization who were charged with corruption after the party’s shocking defeat in 2018 polls. The party became part of a new alliance government under Prime Minister Muhyiddin Yassin that came into power in March. (AP Photo/Yam G-Jun, File)

KUALA LUMPUR — Malaysian prosecutors on Tuesday dropped 46 corruption charges against a former state leader, the second high-profile graft case to be dismissed since a new government took over in March.

Musa Aman, ex-chief minister of Sabah state on Borneo island, was among several senior politicians from the United Malays National Organization charged with corruption after the party’s shocking defeat in 2018 elections. Still, the party became part of a new alliance government that took over in March amid political maneuvering.

Musa, who insists the charges against him were politically motivated, said justice had prevailed. He said he was grateful to have been vindicated of the 30 corruption charges and 16 money laundering charges relating to timber concessions in Sabah.

“What has happened to me and my family, even if it was the result of political differences, I take it as a test from God,” he said in a statement.

His acquittal came less than a month after prosecutors dropped money laundering charges against “The Wolf of Wall Street” film producer Riza Aziz in a settlement that critics have slammed as a “sweetheart” deal for him. Riza is the stepson of former UMNO leader and ex-Prime Minister Najib Razak, who faces multiple corruption charges along with his wife.

The ruling alliance that ousted Najib collapsed in late February, with Prime Minister Mahathir Mohamad resigning in protest over his party’s forming of a Malay-centric government with several other parties.

The king subsequently appointed fellow party leader Muhyiddin Yassin as the new prime minister despite Mahathir’s insistence that he has the support of a majority of lawmakers. Mahathir, 94, has called for a no-confidence vote against Muhyiddin that has been delayed by the coronavirus, and could be held at the next sitting of Parliament in July.

Amer Hamzah Arshad, a lawyer for Musa, said prosecutors’ move to drop the charges comes after the defense filed a suit in February to strike out the charges, which were “political persecution” against Musa.

He said Musa had been cleared of the allegations by corruption agencies in Malaysia and Hong Kong in 2012, with investigations showing that the funds were political donations. Musa was accused of receiving $50.1 million as a bribe to approve logging concessions for 16 companies, as well as receiving and using proceeds from illegal activities.

Prosecutors did not give any reasons for their move, and couldn’t be immediately reached for comment.

Read Next
DOTr adds 2 more city bus routes going to PITX amid GCQ
EDITORS' PICK
Nestlé Philippines’ ‘NESCAFÉ Plan’ bags Grand Anvil at PRSP 56th Anvil Awards
822 NPA-free barangays set to get P20-M gov’t aid — Esperon
Pope Francis to meet top cleric Sistani on second day in Iraq
Don’t waste the hope of vaccines, warns WHO
Every Filipino home can now be a smart home with realme TechLife
Smart reinforces superiority with best speed and mobile video experience in PH
MOST READ
So: I lacked connections to succeed in PH ‘culture’
Robredo on Sara Duterte leading poll surveys: Why are Filipinos drawn to leadership of this kind?
US weapons, hardware in exchange for VFA
US lays out list of aid to ‘satisfy’ Duterte following VFA payment demand
Don't miss out on the latest news and information.