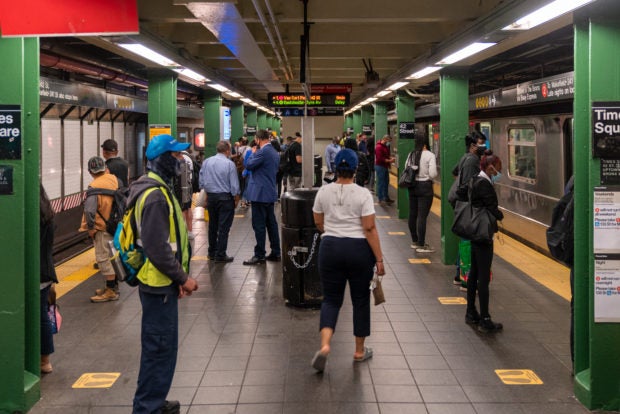 NEW YORK, NY – JUNE 08: People wait for the train at Times Square during rush hour on the first day of phase one of the reopening after the coronavirus lockdown on June 8, 2020 in New York City. New York City enters phase one one hundred days after the first confirmed case of Covid-19. 400,000 people are expected to return to work. David Dee Delgado/Getty Images/AFP

Some 400,000 New Yorkers were allowed to return to work as retailers began offering limited in-store and curbside pickup, with construction and manufacturing also permitted to resume operations.

“It’s good to be back,” said Michael Ostergren, manager of the Shakespeare and Co bookshop on Manhattan’s Upper West Side, where a trickle of customers arrived shortly after the doors reopened.

“Everybody wants to be out of the house. We’re just picking up where we left off in March,” he added.

As New York entered phase one of its reopening and some of Europe’s hardest-hit nations lurched back to a new kind of normal, the WHO reported a record number of new cases globally.

Director-general Tedros Adhanom Ghebreyesus said 136,000 cases had been reported in the past 24 hours, “the most in a single day so far,” with the majority of them in the Americas and South Asia.

“Although the situation in Europe is improving, globally it is worsening,” he told reporters.

COVID-19 caused more than 21,000 confirmed and probable deaths in New York after America’s most populous city quickly became ground zero of the US epidemic in late March.

Mayor Bill de Blasio hailed the first easing of restrictions but warned residents that they must continue to social distance and wash their hands regularly.

“This is a triumphant moment for New Yorkers who fought back against this disease,” he told CNN.

“Come back to work, but remember to stick to those smart rules that got us this far.”

But the reopening effort was stymied by large numbers of high-end stores remaining boarded up following widespread looting during anti-racism protests a week ago.

The start of the economic reboot came a day after de Blasio lifted a controversial week-long curfew he had imposed over the looting.

Governor Andrew Cuomo has urged the thousands of protesters who demonstrated the police killing in Minneapolis of an unarmed black man, George Floyd, to get tested for COVID-19, fearing they may trigger a surge in infections.

One shop that did open in Midtown Manhattan was The Container Store, a home storage outlet.

Sixty-one-year-old K.B Barton left with three bags of items that he had first ordered online.

“It’s livelier today in Manhattan. I see a lot more people in the streets. I am happier but not everyone wears a mask,” he told AFP.

In the borough of Queens, rush hour subway trains into Manhattan were slightly busier than in recent weeks, but still nowhere near pre-coronavirus numbers.

Seventy-year-old Brandy Bligen said he was looking forward to dining outside, which will be included in phase two of the reopening alongside barbershops, and expected in a fortnight if cases don’t surge.

“Being confined is enough to drive you crazy,” he told AFP at the Roosevelt Avenue-Jackson Heights station.

New York’s bars will be allowed to open in phase three, but movie theaters and museums have to wait until phase four, likely in late July and with reduced capacity.

COVID-19 deaths have passed 404,000 worldwide, with more than seven million infections, since the disease emerged in China late last year before sweeping the globe, subjecting billions to some form of lockdown and paralyzing economies.

Governments around the world are cautiously peeling back those restrictions to resuscitate their economies while trying to avoid a resurgence of infections.

In Belgium, pubs and eateries flung their doors open, but with social distancing measures in force, while Ireland opened shops and allowed gatherings of six people and limited travel.

Moscow said Monday it would ease border restrictions and lift lockdown measures in the Russian capital from Tuesday.

New Zealand meanwhile buoyed hopes for the rest of the world as Prime Minister Jacinda Ardern declared that her country had beaten the virus, though strict border controls remain.

But Britain, embarking on a more cautious reopening, imposed a two-week quarantine for anyone coming into the country, British nationals included — sparking legal action by airlines.

The quarantine came as it recorded its lowest daily death toll in more than two months, with 55 deaths in the previous 24 hours.

Across the Atlantic, figures showed the US economy entered a recession in February, ending 128 months of expansion.

And the World Bank said the pandemic has caused the broadest collapse of the global economy since 1870, despite unprecedented government support.

In Latin America, countries geared up for the worst as the outbreak escalated, with Brazil, Mexico and Peru particularly hard hit.

Brazil has the world’s third-highest death toll at more than 36,000, but President Jair Bolsonaro continues to play down the impact of the virus and has urged regional officials to lift lockdown measures.

Fears in Asia that the virus may not be under control persist, with the death toll and infection rate climbing sharply in India, even as the government lifted some curbs Monday after a 10-week lockdown.