Only 4 of ‘Piston 6’ released on bail | Inquirer News

Only 4 of ‘Piston 6’ released on bail 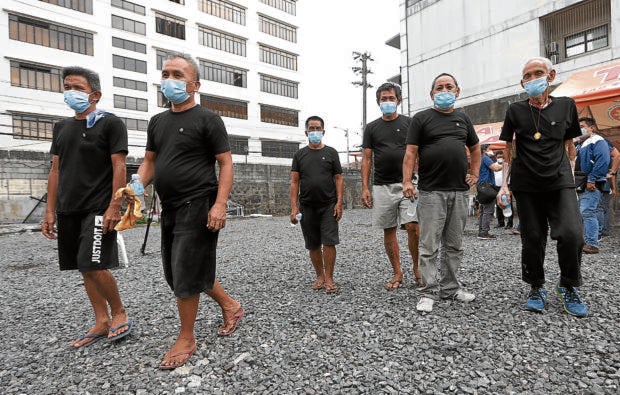 AND THEN THERE WERE TWO The “Piston 6” composed of (left to right) Ramon Paloma, Arsenio Ymas Jr., Severino Ramos, Wilson Ramilla, Ruben Baylon and Elmer Cordero wait for a judge to order their release on Monday. Ramilla and Cordero, however, were not freed due to pending cases. —NIÑO JESUS ORBETA

MANILA, Philippines — After spending almost a week detained by authorities, only four of the “Piston 6” jeepney drivers were released on Monday after court records showed pending cases against the oldest and youngest members of the group.

Seventy-two-year-old Elmer Cordero denied that he had an estafa case with the city police, claiming he was just the namesake of the real respondent.

But Wilson Ramilla, 43, admitted that he was charged with car theft by a jeepney operator in 2010 after he failed to return the vehicle. He clarified, however, that the case had been dismissed.

VJ Topacio, the lawyer for Piston 6, said that while the release of the four was a victory, he was disappointed that two had to be left behind.

“We need to verify and we need [official] papers [to prove that the case was dismissed]. We have to check records just to be sure,” he told reporters.

“It is unfair and they were a bit disappointed because they were visibly excited to be finally released from detention. But we have to follow the process and [abide by] the rules. We will just do our best to have them released,” Topacio said.

According to Cordero, he had no idea what the estafa case was about, adding that he was relying on court records to prove that it was a different person who had been charged in court.

Ramon Paloma, who was among those freed, said that while he was happy they were able to post bail of P3,000 each, it was heartbreaking that two of their companions would have to spend another night in detention.

“It is sad that they cannot come with us, that they will be left behind in jail. We were jailed together but we cannot do anything to help them,” he said.

In a court resolution released on Monday, a metropolitan trial court found reasonable grounds to believe that Piston 6 committed a crime when they gathered on Edsa Monumento on June 2 to protest the loss of their livelihood during the nearly three-month lockdown in Metro Manila.

But the drivers themselves, their lawyers and supporters have repeatedly denied this claim, saying they voluntarily went with the police who “invited” them for questioning, adding that they also observed social distancing and wore face masks during their protest.