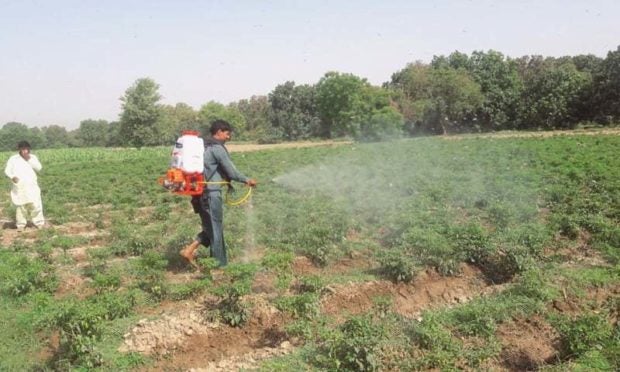 For the first time the insects have entered areas in the two countries that remained unaffected in previous invasions. APP/File via Dawn/Asia News Network

ISLAMABAD — Despite high running tensions between Pakistan and India over Kashmir, Islamabad has said the two were cooperating with each other to fight desert locust invasion under a forum administered by the Food and Agriculture Organization (FAO).

Pakistan is part of FAO’s Commission for Controlling the Desert Locust in South-West Asia (SWAC), which is one of the oldest of the three regional commissions within the global locust early warning and prevention system. Other members of the regional commission include India, Iran and Afghanistan.

FO spokesperson Aisha Farooqui, at the weekly media briefing, said the ministerial meeting of the commission held in March had decided to reactivate communication between the member states on the locust situation and a Technical and Operational Coordination (ToC) team was formed to exchange information; enhance coordination at the border areas; and increase synchronization to combat desert locust outbreak in the region.

She said Pakistan had been participating in SWAC meetings on a weekly basis. She described the cooperation as “fruitful” in exchanging information in the bordering areas of Pakistan and India. “We believe that the respective Technical Teams have been coordinating appropriately through FAO,” she further said.

Pakistan and India are facing worst locust attack in nearly three decades and it is feared that crops worth billions of rupees would be lost. This has led to fears about food security in the two countries. According to FAO, early migration of locusts from Pakistan to India started last month. The situation is expected to aggravate further this month when swarms are expected to arrive from Iran and Horn of Africa.

The insects have, moreover, for the first time entered areas in the two countries that remained unaffected in previous invasions.

Cooperation against locust is a rare instance of the two arch rival neighbors working together since India illegally annexed Occupied Kashmir last August setting off new phase of tensions in ties between the two countries.

Internally in Pakistan, the fight against locust is being spearheaded by Pakistan Army. Chief of the Army Staff Gen Qamar Bajwa on Thursday presided over a session held to review the efforts for countering locust threat.

India on Sunday expelled two Pakistani high commission official on the allegations of espionage. They were accused of collecting data on movement of Indian troops and military cargo through railways. Delhi has, moreover, regularly accused Pakistan of cross-LoC infiltration. Ceasefire violations by Indian troops at the LoC are also on a high this year.

“The two officials of the Pakistan High Commission in India were abducted by the Indian authorities on false and unsubstantiated charges. … in clear violation of the Vienna Convention on Diplomatic Relations as well as norms of diplomatic conduct,” Ms Farooqui said.

She further said: “Violations of diplomatic norms and India’s continued belligerent attitude is a threat to regional peace and security. India continues its deplorable and jingoistic behavior through unprovoked firing along the LOC and the WB.”

The spokesperson, however, noted that Pakistan does not want to escalate the situation and has acted with restraint.

Ms Farooqui rejected Indian statement on defacement of a Buddhist carving in Chilas (Gilgit-Baltistan) as preposterous.

“The Indian government’s contentions concerning the Buddhist cultural heritage in Gilgit-Baltistan are preposterous. These are part of Indian leadership’s unrelenting anti-Pakistan propaganda,” she asserted. Pointing to maltreatment of minorities in India and rights abuses in Occupied Kashmir, the spokesperson said the RSS-BJP government in Delhi “has no credentials whatsoever even to feign concern for minorities, either at home or elsewhere”.

She also rejected India’s “malicious allegation” relating to the Eleventh Report of the United Nations Analytical and Sanctions Monitoring Team (MT), saying it was aimed at misleading the international community.

She said the spokesperson of the Indian Ministry of External Affairs (MEA) has misrepresented the Eleventh Report of MT concerning the Taliban and other associated individuals and entities constituting the threat to peace, stability and security of Afghanistan, to slander Pakistan.

Ms Farooqui said there was no reference to “safe havens” in Pakistan in the Monitoring Team (MT) report.