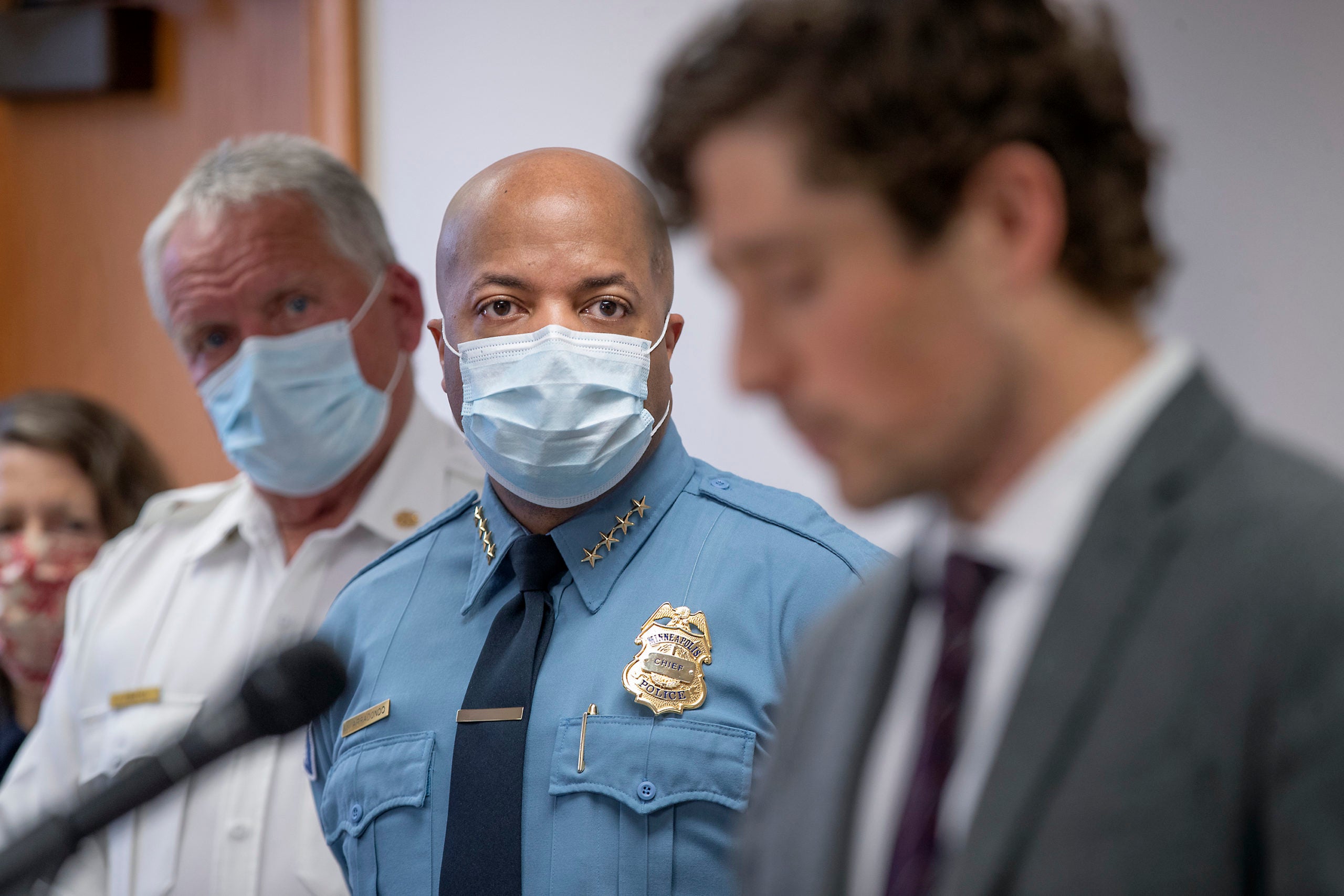 In this May 28, 2020, file photo, Minneapolis Police Chief Medaria Arradondo, center, listens as Minneapolis Mayor Jacob Frey becomes emotional during a news conference in Minneapolis, Minn. George Floyd’s death and the protests it ignited nationwide over racial injustice and police brutality have raised questions about whether Arradondo — or any chief — can fix a department that’s now facing a civil rights investigation. (Elizabeth Flores/Star Tribune via AP, File)

MINNEAPOLIS — A majority of the members of the Minneapolis City Council said Sunday they support disbanding the city’s police department, an aggressive stance that comes just as the state has launched a civil rights investigation after George Floyd’s death.

Nine of the council’s 12 members appeared with activists at a rally in a city park Sunday afternoon and vowed to end policing as the city currently knows it. Council member Jeremiah Ellison promised that the council would “dismantle” the department.

“It is clear that our system of policing is not keeping our communities safe,” Lisa Bender, the council president, said. “Our efforts at incremental reform have failed, period.”

Bender went on to say she and the eight other council members that joined the rally are committed to ending the city’s relationship with the police force and “to end policing as we know it and recreate systems that actually keep us safe.”

Floyd, a handcuffed black man, died May 25 after a white officer pressed his knee into Floyd’s neck, ignoring his “I can’t breathe” cries and holding it there even after Floyd stopped moving. His death sparked protests — some violent, many peaceful — that spread nationwide.

Community activists have criticized the Minneapolis department for years for what they say is a racist and brutal culture that resists change. The state of Minnesota launched a civil rights investigation of the department last week, and the first concrete changes came Friday in a stipulated agreement in which the city agreed to ban chokeholds and neck restraints.

A more complete remaking of the department is likely to unfold in coming months.

Disbanding an entire department has happened before. In 2012, with crime rampant in Camden, New Jersey, the city disbanded its police department and replaced it with a new force that covered Camden County. Compton, California, took the same step in 2000, shifting its policing to Los Angeles County.

It was a step that then-Attorney General Eric Holder said the Justice Department was considering for Ferguson, Missouri, after the death of Michael Brown. The city eventually reached an agreement short of that but one that required massive reforms overseen by a court-appointed mediator.

The move to defund or abolish the Minneapolis department is far from assured, with the civil rights investigation likely to unfold over the next several months.

On Saturday, activists for defunding the department staged a protest outside Mayor Jacob Frey’s home. Frey came out to talk with them.

“I have been coming to grips with my own responsibility, my own failure in this,” Frey said. When pressed on whether he supported their demands, Frey said: “I do not support the full abolition of the police department.”

He left to booing.

At another march Saturday during which leaders called for defunding the department, Verbena Dempster said she supported the idea.

“I think, honestly, we’re too far past” the chance for reform, Dempster told Minnesota Public Radio. “We just have to take down the whole system.”