20 lawmakers step back from terror bill 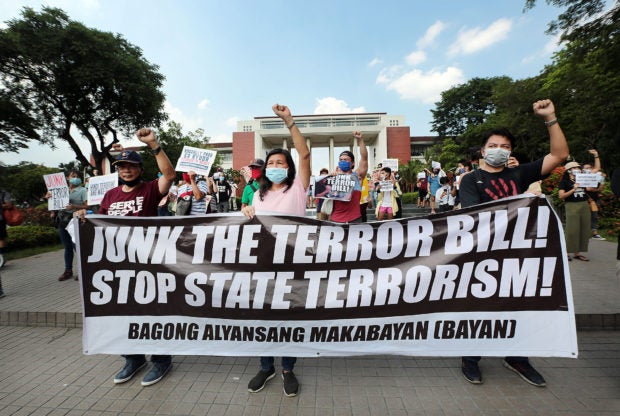 LOUD AND CLEAR Clamor for the junking of the terror bill is building up on social media after Thursday’s huge gathering by hundreds of protesters on the campus of the University of the Philippines in Diliman, Quezon City, despite assurances from Malacañang and Congress that it’s peppered with safeguards against violation of human rights. —GRIG C. MONTEGRANDE

MANILA, Philippines — Fifteen members of the House of Representatives had their names stricken out as authors of the controversial terrorism bill while at least five others retracted or corrected their vote amid a groundswell of opposition to the controversial measure feared as a potential state weapon against dissent.

The final “engrossed” version of House Bill No. 6875, which adopted the Senate version as it passed third and final reading last Wednesday, lists only 56 names as coauthors, fewer by 15 than the 71 who were originally named in the committee report.

The bill is expected to land on President Rodrigo Duterte’s desk this week for his signature despite mounting protests in the streets and an uproar on social media over provisions critics said would make it easier for authorities to suppress free speech, harass the opposition, arrest activists, detain them without warrant for longer periods, and brand anyone as a terrorist.

The delisted names include those of a principal author, Muntinlupa Rep. Ruffy Biazon, who earlier disowned the measure as it only copied the Senate version, and three Deputy Speakers: Loren Legarda of Antique, Aurelio Gonzales Jr. of Pampanga, and Evelina Escudero of Sorsogon.

Some of the lawmakers, including Legarda, had requested their names removed after they were “mistakenly” referred to as coauthors in the committee report endorsed to the plenary for second and third reading approval last week.

The division of the House on Wednesday resulted in a split 173-31 vote with 29 abstentions, but that was corrected to 168-36 on Thursday to reflect a number of corrections or retractions from the members.

Laguna Rep. Sol Aragones and Pasig Rep. Roman Romulo on Sunday each said they informed the House secretariat that they were incorrectly recorded as having voted affirmatively to HB 6875 when they had in fact abstained.

“I share the view that we need to fight terrorism, but there are provisions I do not agree to and which I think needs further study, which is why I voted to abstain from the start, contrary to the list circulating that I voted yes,” Aragones said.

Romulo said he immediately informed the secretariat that his vote “was not properly reflected.” “They checked. Then they said it will be corrected,” he told the Inquirer.

Bulacan Rep. Lorna Silverio, who voted yes to the bill, told Secretary General Jose Luis Montales in a June 4 letter that she was retracting her vote and would rather abstain “because I personally want to study further the pros and cons of the amendments introduced to the Human Security Act.”

On Friday, Albay Rep. Joey Salceda also asked to change his affirmative vote to an abstention, citing a number of “reservations” about the bill, including its broad and vague definition of “terrorism” and the need to amend sections that were inconsistent with human rights laws.

Other lawmakers, including Baronda and Gorriceta, reportedly asked to be removed as coauthors as well, though they had voted affirmatively.

Deputy Speaker Vilma Santos-Recto, who voted yes “with reservations,” was listed as a coauthor in both the committee report and final version of the bill. Her son, TV host-actor Luis Manzano, had shared on social media a text message from the Batangas congresswoman stating that she was not a “principal author.”

To date, the House has not released an official tally of how its members voted on the bill.

In a bid to find out the “real score,” Albay Rep. Edcel Lagman asked Montales over the weekend for a “certification on how representatives voted on the controversial measure last June 3.”

In a letter emailed on Sunday, Lagman said there “appears to be some confusion on the tabulation of votes as evidenced by changes and corrections made in the result of the voting by the attending staff of the Secretariat.”

He said the certified true copy of the voting must be “based on the individual voting in the plenary and by Zoom as recorded in our All Members Viber Community.”

“A public disclosure of the voting record would also afford representatives to clarify how they actually voted or that they did not vote at all,” he added.

Lagman and another critic of the bill, Bayan Muna Rep. Carlos Zarate, earlier pressed their colleagues to withdraw their support for the measure.

A group responding to the needs of different sectors in Masbate on Sunday called on representatives from the province to change their votes to no.

Masbate Rep. Elisa Kho voted for the bill. The votes of Representatives Narciso Bravo Jr. and Wilton Kho did not appear on the list, meaning they were either absent, refused to vote, or that their votes were not registered.

“As our representatives, you have an obligation to hear our pleas: Our call to junk the antiterrorism bill is to preserve and protect our political, civil and human rights,” the group said in a statement.

“We are in a pandemic, but why is an oppressive bill given the priority?” Marcaida said.

The bill amends and repeals the Human Security Act, and imposes tougher penalties, including life imprisonment, on anyone who will participate in, conspire with or incite others in the planning or facilitation of a terrorist attack.

Critics argued that the definitions of acts of terrorism in the bill were too broad and allowed too many interpretations that might pave the way for human rights abuses.

One provision attempts to respond to that argument by stating that “terrorism as defined in this section shall not include advocacy, protest, dissent, stoppage of work, industrial or mass action, and other similar exercises of civil and political rights, which are not intended to cause death or serious physical harm to a person, to endanger a person’s life, or to create a serious risk to public safety.”

Those who would “voluntarily and knowingly” join any organization, association or group knowing that it is a terrorist organization would also be imprisoned for 12 years.

Not only the political opposition, activists and human rights advocates but also Muslims in southern Philippines, where a five-month takeover in 2017 of the city of Marawi by militants who had pledged allegiance to the Middle East terror group Islamic State showed the extent of extremist influence in the country, are suspicious of the bill.

At least 40 Moro lawyers and law students issued a statement on Sunday opposing the measure, whose provisions they called “unacceptable encroachments on our civil liberties.”

“We condemn terrorism, [but] as lawyers, students of the law, and human rights advocates, we likewise know all too well that overzealous desire to capture the enemy, when sanctioned by law that is bereft of any procedural and substantive safeguards to protect the innocent, is just as dangerous to our lives, liberties and freedoms,” the group said in the statement.

“We shudder to think how our congregational prayers, khutbahs, and halaqas might be seen as inciting to terrorism by oblivious persons in authority,” the group said. “We are scared for our youth who may be unsuspectingly going about their business in school or work, only to find out eventually (or never) that their every step is being monitored by state agents — who now have the legal cover to do so — when their only ‘crime’ is being Muslim.”

“We worry for our communities displaced by conflict who will face more difficulty in accessing aid, as humanitarian organizations may be prevented from extending assistance lest they be suspected of providing material aid to terrorists,” the group said.