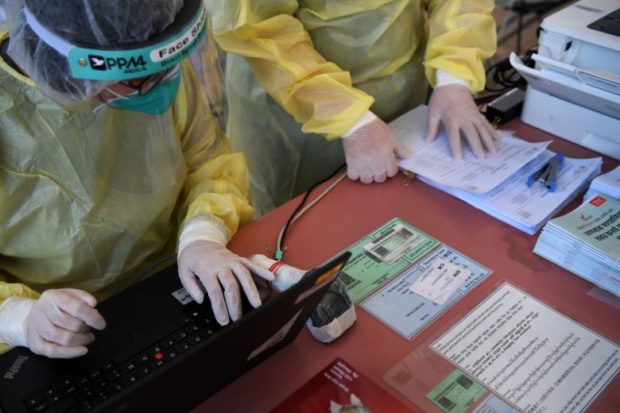 This brings the total number of deaths from complications due to Covid-19 infection to 25. The Straits Times/Asia News Network/KUA CHEE SIONG

SINGAPORE — A 41-year-old male Chinese national who recovered from the coronavirus has died from complications about two weeks after he was discharged.

This brings the total number of deaths from complications due to Covid-19 infection to 25.

The patient, which the Ministry of Health (MOH) identified as Case 11,714, recovered from the infection and was discharged on May 17.

But he collapsed on Thursday and the coroner certified the cause of death as massive pulmonary thromboembolism following the infection, MOH said on Saturday night (June 6).

On Saturday, MOH also said that a 51-year-old Singaporean man working as a cleaner in the pre-school section of Sir Manasseh Meyer International School was among the seven new community infections.

He was tested as part of the proactive screening of pre-school staff.

Another new infection is a 27-year-old Singaporean man who works as a physiotherapist at Tampines Polyclinic. He has no recent travel history to affected countries or regions, and had not gone to work since onset of symptoms on Wednesday. He is now warded at the National Centre for Infectious Diseases.

The third case is a 42-year-old permanent resident who is a family member of a previously confirmed case. He had already been quarantined earlier.

The remaining community cases are four work permit holders who were picked up from proactive screening, said MOH.

Three were tested as workers in essential services, while one was tested as part of the screening of migrant workers deployed at public healthcare institutions.

The fourth case had been doing building maintenance works at Khoo Teck Puat Hospital and had not interacted with hospital staff or patients, said MOH.

Five of the seven community cases are asymptomatic and were picked up as a result of proactive screening and surveillance.

Foreign workers living in dormitories make up the rest of the 337 new coronavirus cases, bringing the country’s total to 37,527. Over one in ten among this group have now tested positive for the virus.

There were no imported cases, and 98 per cent of the new cases are linked to known clusters.

Two new clusters in dormitories have emerged, one in Beyond Tuas South Boulevard and the other at 10 Kwong Min Road.

MOH also closed a cluster at the construction site at 15 Serangoon North Avenue 1 after no new cases were linked to it for two incubation periods of the virus, or 28 days.

The ministry added Hougang Mall’s NTUC Fairprice to the list of places visited by community cases. A confirmed case had visited the mall between 11.10am and noon on May 30.

Other places visited by community cases while they were infected include wet markets, supermarkets, hawker centres, and malls such as Jurong Point, Jem and Junction 8.

The full list of places, along with the dates and times when the locations were visited by the patients, are on MOH’s website.

While there is no need to avoid these places, those who have gone to these places should monitor their health closely for 14 days from the date they visited, said MOH, adding that they should visit a doctor promptly if they develop fever, respiratory symptoms or loss of taste or smell.

Those who were identified as close contacts of confirmed cases would already have been notified by MOH, said the ministry.

The daily average for new community cases has increased to seven in the past week from five the week before, said MOH. Across the same periods, the number of unlinked cases has remained stable at an average of two per day.

A total of 350 more patients were discharged, bringing the total number of recovered patients to 24,559. These include nine patients who tested positive for Covid-19, but who died of other causes, which MOH counts as having recovered.

Currently, 308 confirmed cases are still in hospital with four of them in critical condition in the intensive care unit.

Another 12,635 are isolated and cared for at community facilities, which are for those with mild symptoms or who are clinically well but still tested positive for Covid-19.