Cebu City—Three students, four members of progressive groups in Cebu and a bystander were arrested by police on Friday morning while holding a rally inside the University of the Philippines (UP) campus in the city against the terrorism bill being pushed in Congress and now closer to being signed into law by President Rodrigo Duterte.

“We gave them 10 minutes to disperse but they did not heed our call. Hence, we decided to arrest them,” Esguerra said.

As of 4 p.m. Friday, more than 20 protesters were still stuck inside the UP Cebu campus as policemen were assembled outside on Gorordo Avenue.

Police said charges of violating Section 4, Paragraph 12 of the Omnibus Guidelines on the Implementation of Community Quarantine in the Philippines, particularly the prohibition on mass gathering, will be filed against the arrested protesters before the Cebu City Prosecutor’s Office.

The law requires a written permit from the government to hold rallies, but it allows such assemblies in parks, private properties, and state campuses.

The eight detainees were part of about 30 people who voiced their opposition to the proposed Anti-Terrorism Act of 2020 that the House of Representatives, adopting the Senate version, approved on third and final reading on Wednesday. 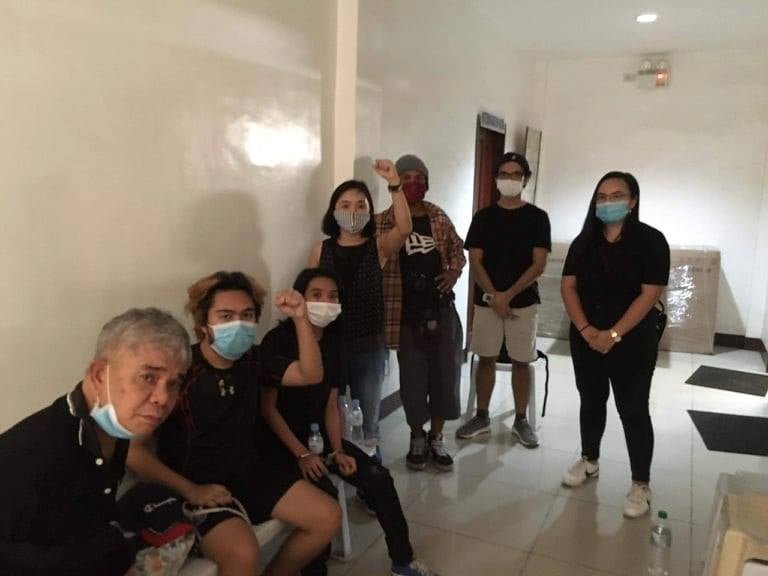 ‘WE SIMPLY VOICED OUT OUR SENTIMENTS’ These protesters from the University of the Philippines in Cebu are brought to the city’s Police Office on Friday after their arrest for allegedly violating the government’s ban on mass gatherings. —BAYAN CENTRAL VISAYAS

Their lawyer, Rey Fernandez, questioned the arrests, citing a 1982 agreement between the state university and the military and police barring their entry into UP campuses without the latter’s consent.

That agreement, signed by then Defense Secretary Fidel Ramos and then UP president Jose Abueva, is known in UP as the Soto-Enrile Accord, in reference to student leader Sonia Soto and then Defense Minister Juan Ponce Enrile.

“As we gather more facts on the ground about the incident, we are coordinating with UP System officials on the legal and other important aspects of the matter, especially with respect to the 1989 UP-DND (Department of National Defense) Peace Accord,” she said.

Corro added that “In any case, we are deeply disappointed that none of the police officers tried to coordinate with UP Cebu [with regards] to handling the situation which we hope could have led to a more sound and sensible resolution in light of prevailing restrictions under the general community quarantine.”

She also emphasized that “our guards blocked the police from entering the campus and even chased them out when they jumped into our walls trying to chase the student protesters. Our guards also assisted the students by bringing them into safety inside a campus building.”

‘We are in a pandemic’

Ferro, however, pointed out that “We are in a pandemic. Why are they holding a rally? What if they have the disease? Are they not spreading it to other people?”

“We are not against freedom of expression if we were only in a normal situation. But at present, we are in a pandemic,” he said.

Responding, in particular, to Thursday’s protest at UP Diliman, PNP spokesperson Brig. Gen. Bernard Banac said “we should avoid any opportunity for possible human-to-human transmission of a deadly virus that even UP scientists themselves are trying so hard to eradicate.”

“We support alternative means to exercise freedom of expression like what some labor groups did last May 1,” he also said. “In this time of public health crisis, the safety of human lives is paramount.”

‘You be the judge’

One of the arrested protesters, Joahanna Veloso of the National Union of Students of the Philippines, said “We simply voiced out our sentiments. And yet the members of the SWAT [Special Weapons and Tactics] came, carrying their long firearms. You be the judge who the terrorists are.”

Also arrested was 19-year-old Clement Corominas, a bystander who, according to the protesters, was picked up after taking a video of the rally. —WITH REPORTS FROM CARLA GOMEZ AND MELVIN GASCON