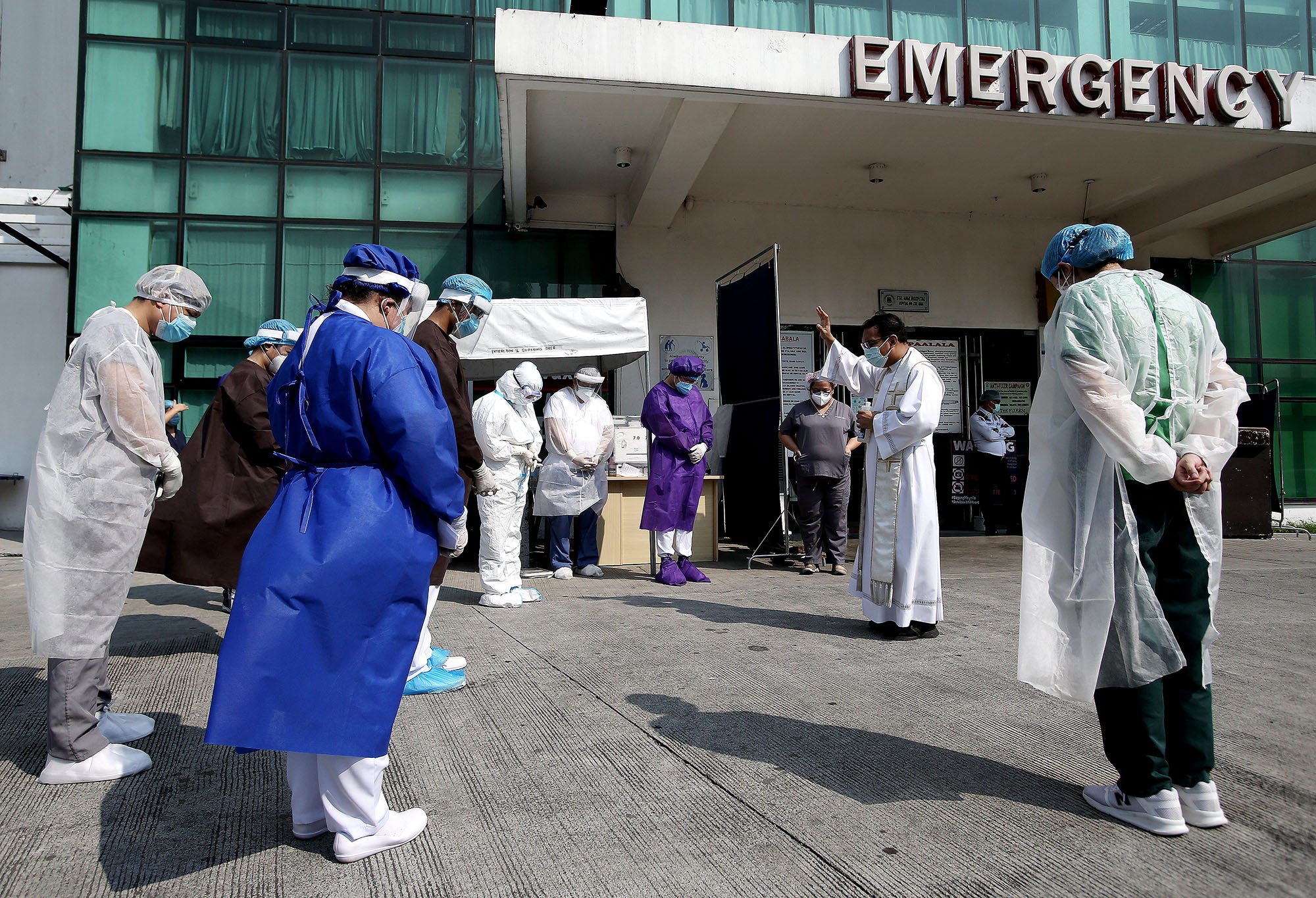 THE LORD WILL PROTECT YOU Catholic priest Hans Magdurulang, from San FelipeNeri Parish Church in Santa Ana, Manila, blesses front-line workers at the district hospital on Thursday, the 100th day since the Manila Infectious Disease Control Center began operating there. The center is the main battle ground in Manila’s fight against the new coronavirus that causes the severe respiratory ailment COVID-19. At least 107 patients have recovered from the disease under the care of the center’s staff. —RICHARD A. REYES

An “angry” and “frustrated” President Rodrigo Duterte has given government agencies only three working days to distribute P32 million in compensation to the families of health workers who died on the front line of the battle against the new coronavirus.

Presidential spokesperson Harry Roque said at a press briefing on Thursday that Mr. Duterte got angry when he learned that the heirs of the 32 doctors, nurses and hospital assistants who died of COVID-19, the severe respiratory disease caused by the new coronavirus, had not received a single centavo despite the passage three and a half months ago of a law authorizing the compensation.

“The President was really angry. Angry, frustrated,” Roque said, describing Mr. Duterte’s reaction to news about the failure of the Department of Health (DOH) to implement the compensation provision of the law.

“The President gave until Tuesday for concerned agencies to release the compensation benefits to health workers who got sick and died of COVID-19 in the line of duty,” Roque said.

Roque announced the presidential solution to the snafu that the DOH blamed on the absence of implementation rules for the law.

Senate President Vicente Sotto III and several colleagues gave Health Secretary Francisco Duque III a tongue lashing on Wednesday for the failure, which they discovered during a hearing on Tuesday.

They said implementation rules were not needed to compensate the health workers because the provision for it in the law was quite clear.

The 32 health workers who have died are among the more than 2,600 front-line hospital workers who have contracted the coronavirus at work. More than 1,400 of them have recovered, but two are severely ill.

A day after the senators gave Duque a drubbing and the President’s angry reaction became known, the DOH on Thursday said it had begun the compensation process after a difficult search for funds.

Health Undersecretary Maria Rosario Vergeire told an online news conference that the DOH had contacted the families of the health workers who had died and asked them to submit required documents.

“Once the relatives are able to complete the submission of documentary requirements, we can immediately process the checks since the budget is ready already,” Vergeire said.

She said Duque had signed an administrative order drawn up jointly with the Department of Budget and Management and the Department of Labor and Employment containing guidelines for the payment of compensation to health workers who would fall in the fight against the coronavirus.

Vergeire said the payout was delayed because the DOH had difficulty finding the money, which the law requires to come from realigned or reallocated funds.

After learning that tapping the Social Security System and the Government Service Insurance System for funding would require a difficult process, the DOH decided to reallocate P100 million from its medical assistance program for the health workers’ compensation fund, she said.

The senators are making sure there will be no more delay in compensating health workers by writing in a deadline for payment in Bayanihan 2, the bill extending the Bayanihan law by three months.

Senate President Pro Tempore Ralph Recto said on Thursday that Bayanihan 2 would set a 90-day time frame within which the government should release the payout.

“We are imposing a deadline. [The compensation’s] release should not be at the mercy of red tape,” Recto said.

The provision would also make the compensation tax-free, he said.

Congress, however, adjourned on Thursday without passing Bayanihan 2. The reason: President Duterte did not certify it as urgent.

In Malacañang, Roque said the President would not certify the bill, but did not explain why.

Roque dismissed Sen. Risa Hontiveros’ call for an audit of the funds and use of special powers Congress had given to Mr. Duterte through the Bayanihan law.

He said Mr. Duterte had been diligently submitting weekly reports to Congress on his administration’s response to the coronavirus crisis.

“Maybe Sen. Risa Hontiveros only needs to read the weekly report of the President to Congress,” Roque said.