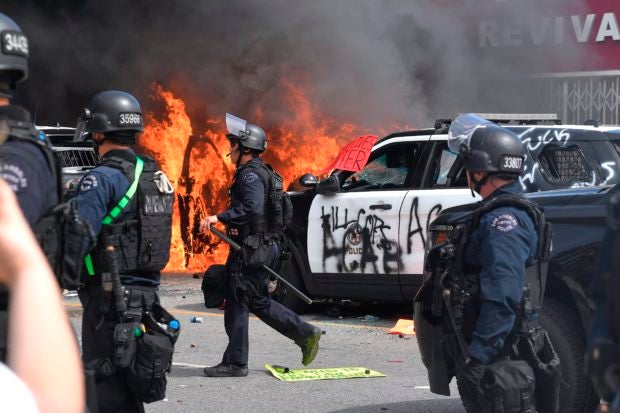 A police car burns as another one is seen destroyed during a protest over the death of George Floyd on Saturday, May 30, 2020, in Los Angeles. Image: AP/Mark J. Terrill

Police were caught on live television mistakenly restraining a black family defending a store from apparent looters in California, United States amid ongoing protests in the country over the death of civilian George Floyd.

Several concerned community members of a Los Angeles liquor store were helping its owners defend the shop against potential looters, according to Fox 11 on June 2.

An African American woman, called only as Monet, along with her husband and brother-in-law, tried to protect the store and noted that she has known the owner for 30 years.

Fox 11 reporter Christina Gonzalez and her team were at the scene covering the standoff between the looters and Monet’s group when a police car went by. They then flagged down the police to seek help and as the cops approached them, the reporter can be heard explaining to the officers where the potential looters were, and that Monet and her family were trying to protect the stores.

The cops then proceeded to chase two men who ran across the road while some of the cops, apparently confused, went for Monet and her family, putting them in handcuffs on live TV.

Los Angeles Police Department commanding officer Andy Neiman, who was reported to have been watching the “confusion” unfold on TV drove to the location to clear things up.

Monet and her family, along with other members of the community wrongfully detained, were later released.

Monet then emphasized that while she understands that tensions are high, the police need to do a better job in responding to members of the African American community, according to the report.

“I get it. I understand they’re [the officers] tired. They’re worn-out too. We’ve been worn out. I’m 55, we’re tired too,” she was quoted as saying. “The same injustice you did to us years ago, and my father and forefathers, you guys are doing to our young black men and our young black women, including Latinos.”

Floyd, a 46-year-old black man suspected of paying a cigarette purchase with a $20 counterfeit bill, died in the hands of the police on May 25. His death has led to numerous protests across the U.S. and in other countries. These have led to looting, vandalism and skirmishes between police and protesters for the past days. Ian Biong/JB