Agency lifts ban on cyclists on major roads but tells them to stick to sidewalks to avoid accidents
By: Jodee A. Agoncillo, Krixia Subingsubing, Matthew Reysio-Cruz - @inquirerdotnet
Philippine Daily Inquirer / 05:18 AM June 04, 2020 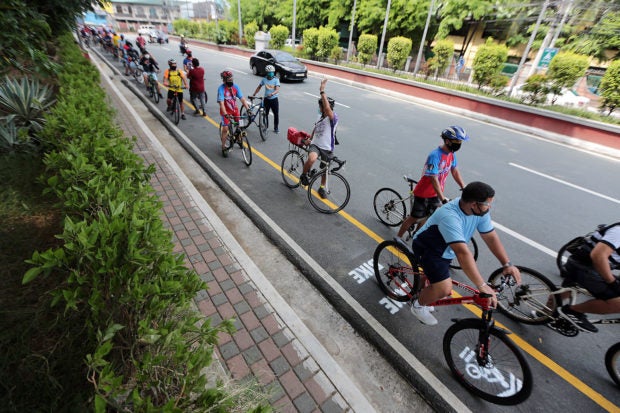 MANILA, Philippines — While it said it would no longer file charges and slap fines against a cycling group which had put up makeshift barriers to create a temporary bike lane on Commonwealth Avenue, the Metropolitan Manila Development Authority (MMDA) announced on Wednesday that it would not tolerate any more pop-up bike lanes.

Ironically, the MMDA issued the warning on World Bicycle Day even as two local governments — Taguig and San Juan — marked the occasion by opening up bike lanes in their respective cities to give residents an alternative due to the few modes of public transport available for now.

“We’re no longer banning bikers along major thoroughfares considering the limitations of public transport under the general community quarantine,” said MMDA spokesperson Celine Pialago. “What we want them to do is to use the sidewalks on Edsa and other thoroughfares so they are not prone to accidents.”

“You cannot just improvise bike lanes along major roads without permission from the MMDA or the local government units. The ends do not justify the means. Their intentions might be good, but the law is the law,” she added.

On Tuesday, Pialago said they would sue Bikers United Marshalls (BUM) for endangering people after its members set up a row of 6-liter bright orange plastic bottles filled with water on Commonwealth Avenue to create a bike lane.

BUM said it was ready to face the consequences, adding that the barriers were removed after the morning rush hour.

To mark World Bicycle Day, Taguig Mayor Lino Cayetano signed the Taguig City Bike-Friendly Ordinance which promoted biking and established a “comprehensive” plan on the use of bicycles as an essential mode of transportation.

With several cyclists, Rep. Lani Cayetano also tested the bike lanes on C-6 Road stretching around 3.5 kilometers all the way to Taytay, Rizal.

Pop-up bike lanes were also set up on Cayetano Boulevard and Bayani Road for a three-day demonstration that cycling was doable in the city.

Councilor Darwin Icay said the ordinance provided for the creation of the Active Transport Office, an office dedicated to bicycles and the creation of programs such as the Bike Patrol—law enforcers deputized on bikes—and Bike Share, a bike lending program for city hall employees and health workers.

The city will also tap businessmen and mall owners to provide bike racks for employees and customers and provide incentives to those who would switch to bicycles as the main mode of transportation.

A monthly “Bike-Friendly Map” will be posted on the I Love Taguig Facebook page for updates on bike lanes and facilities such as showers and bike racks.

Also on Wednesday, San Juan inaugurated the first phase of its bicycle lane as the case doubling time of the former new coronavirus disease (COVID-19) hotspot slowed to 10.46 days, the amount of time it took for its caseload to double.

The city recently also marked its sixth straight day without recording any COVID-19 deaths, which had steadied at 43.

The opening of its 4.21-kilometer bike lane, which passes City Hall, a public hospital and Greenhills Shopping Center, was another step seen by Mayor Francis Zamora as essential to restoring a semblance of normalcy to San Juan.

“Bicycles are a reliable means of transportation during this pandemic, which requires social distancing,” Zamora said.

The bike lane was put up together with Edsa Evolution, a group that advocates for biking to be a staple on Philippine roads. It has been establishing pop-up bike lanes in recent days, arguing that Filipinos will embrace the means of transport if the government supports it.

But transport officials and bikers are at loggerheads as to what kind of bike lanes should be set up.

“The benefits of pop-up bike lanes are well-documented. Doing nothing is more fatal,” he said. “When a traffic management agency claims cycling is unsafe on a road, they also tacitly admit their incompetence at controlling dangerous, reckless driving, right? It’s a two-way street.”

Sidewalks not for cyclists

In fact, the MMDA’s suggestion to use sidewalks was much more unsafe than establishing at-grade lanes, he added.

“Why are we talking about waiting for elevated lanes? There is plenty of space on Edsa. A bike lane would outperform any Edsa car lane, and a pop-up lane is completely safe if you manage speeds on Edsa by lowering the speed limit,” he said.

Commuter group AltMobility called on mayors to “consider passing ordinances to establish clear technical guidelines for how the bike lanes [would] be established, and to create proper institutional structures to implement these initiatives.”

In the template ordinance it crafted, the group suggested the creation of an “active transport office” that would, among others, promote and implement relevant active transport (walking, cycling) policies.