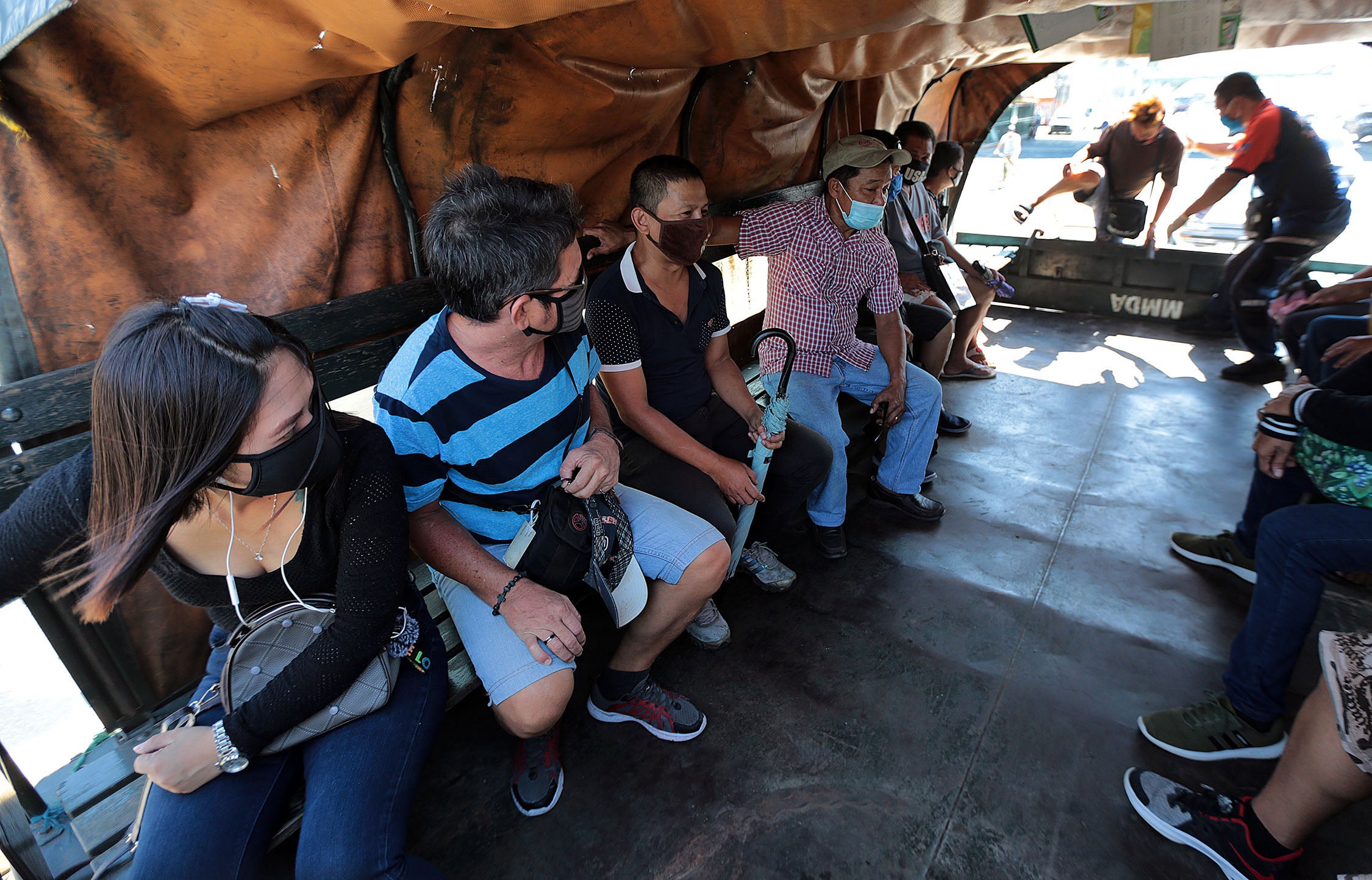 FREE BUT RISKY People sit close to each other on a truck deployed by the Metropolitan Manila Development Authority to Commonwealth Avenue in Quezon City on Tuesday to ferry stranded commuters. The ride is free, but risky for coronavirus transmission without physical distancing. —GRIG C. MONTEGRANDE

MANILA, Philippines — Anger mounted in Metro Manila on Tuesday over lack of public transportation for workers allowed to return to their jobs after three months of quarantine, with senators calling the situation an emerging crisis and slamming transportation officials for their insensitivity and lack of foresight.

Sen. Nancy Binay dared transportation officials to try commuting amid the limited number of public utility vehicles allowed on the road, and said they seemed to be favoring a particular segment by banning jeepneys—the backbone of public transportation in the country.

Since the coronavirus quarantine in Metro Manila was eased Monday to revive the economy, scores of commuters have been lining the roads during rush hours waiting for public vehicles, some scrambling and jostling with each other to get on trucks offering free rides.

Jeepneys, UV Express vans, and most public utility buses remain prohibited, even though more businesses were allowed to resume operations.

Transport officials allowed the three metro trains, so-called augmentation buses, and Philippine National Railways to operate at limited capacity to prevent the spread of the coronavirus that causes the severe respiratory disease COVID-19.

They allowed taxis and ride-hailing company cars to return to the road, requiring them to operate on apps for cashless transactions.

Transport officials refused to allow jeepneys and UV Express vans to go back to their routes because these vehicles accept fare only in cash, which is the only way the majority of commuters—the low-income earners who don’t own smartphones—pay for their rides.

The Department of Transportation (DOTr) and the Land Transportation Franchising and Regulatory Board (LTFRB) have been talking about replacing the jeepneys with so-called modernized jeepneys—actually minibuses that look not the least like the “King of the Road” that has become an icon of Philippine tourism and don’t serve inner-city routes along which many big and small businesses are located.

The ban on jeepneys and city buses backfired on the government’s economic reopening plan, with thousands of workers again failing to get to their jobs or begging for rides on Tuesday and transport officials not backing down.

No clear plan for commuters

Binay said DOTr officials failed to lay down a clear plan for the commuting public, causing chaos, misery and confusion.

“Three months under [quarantine] and still they have no clear plan in place. What happened to foresight? It’s good they have air-conditioned vehicles. Why don’t the DOTr officials try to commute from their homes to their offices?” Binay said.

The officials should try to experience what commuters go through to understand their daily struggles, she added.

Binay said it was unfair that commuters faced so many challenges and limited choices, but those who owned vehicles could travel with ease.

“[The] DOTr knew that Metro Manila and the rest of the regions will soon be transitioning to the new normal. They knew that 30 percent of those in [Metro Manila] will start going to work by June 1— and then they will deploy trucks for free rides [that] compromise and breach all health protocols, particularly physical distancing,” she said.

Binay also criticized the ban on jeepneys, describing it as “unrealistic, anticommuter at antiworker.”

“Obviously, [the] DOTr is favoring a certain segment of the mass transport sector, while ignoring and isolating the biggest public transport segment [on] which the majority of the commuting public depend,” she said.

Moreover, keeping jeepneys off the roads is akin to abandoning what she described as one of the most vulnerable sectors that move people and the economy.

“When you exclude the jeepneys from the equation, you also [abandon] 250,000 families—and their children are the ones who suffer the most,” she said.

Sen. Risa Hontiveros backed the proposal of advocacy groups for the government to contract the services of operators and drivers of buses, jeepneys and other public utility vehicles to serve the commuting public.

Hontiveros warned that the lack of adequate public transportation could become a commuter crisis. 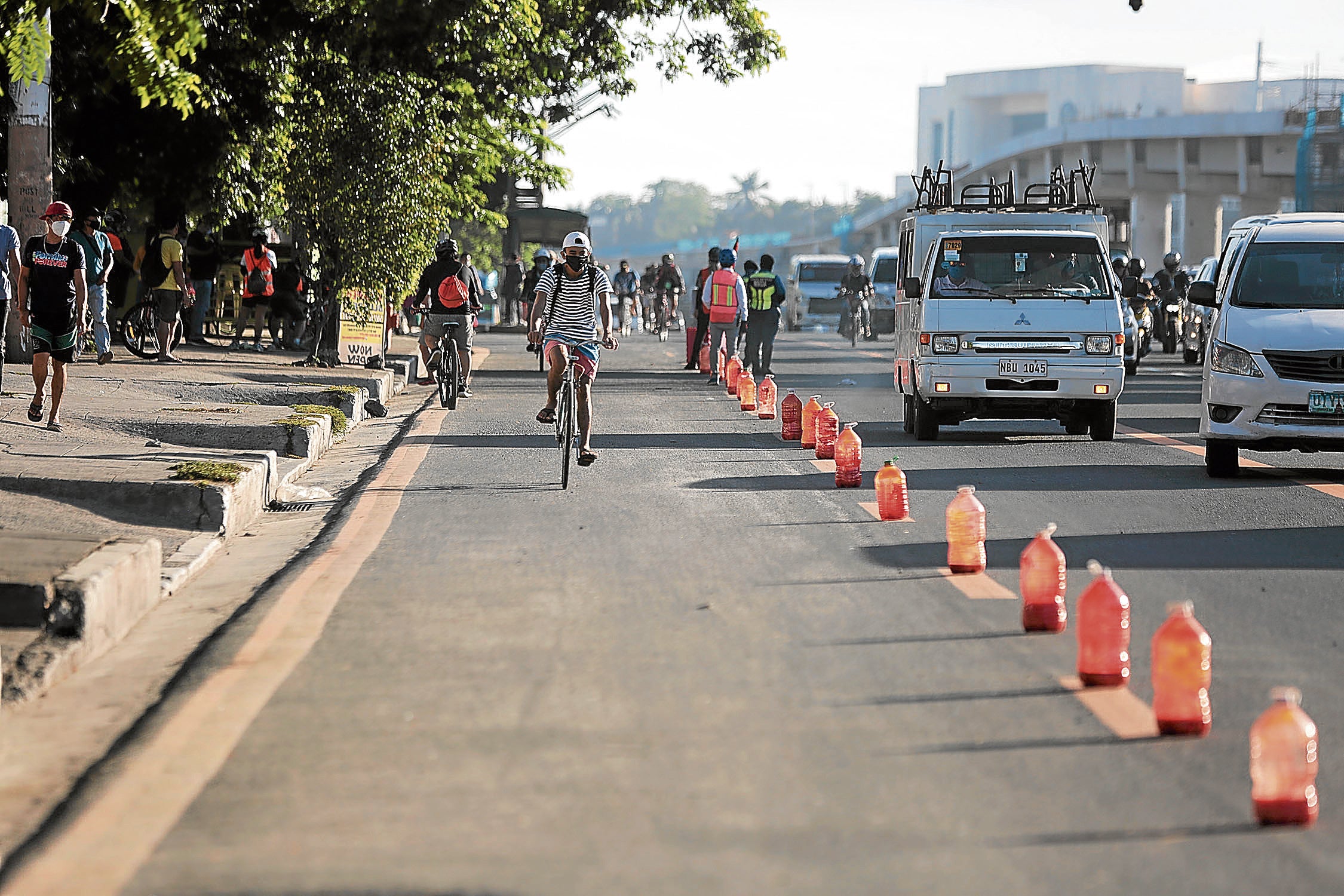 LAST DAYS OF SUMMER A cycling group uses plastic jugs to mark off a bicycle lane on Commonwealth Avenue in Quezon City. Transport officials encourage people to use bicycles in the absence of jeepneys and city buses under general community quarantine in Metro Manila, but don’t say whether people should cycle to work under the rain during the rainy season,which is almost here. (See related story in Metro, MMDA to sue, slap P1K fine vs bike group .) —GRIGC.MONTEGRANDE

“The lack of transport options is not just an emerging crisis for commuters, it is also a serious health hazard,” she said.

There is no point in limiting the number of passengers on trains and buses if they’re exposed to health risks on the road, she pointed out.

The hardships on the road and the difficulty in commuting should not be part of the new normal, she added.

According to Hontiveros, the proposal of the #MoveAsOne coalition and other advocacy groups for the government to pay operators of public transport a per kilometer fee to ply their routes was a viable solution.

It would allow the government to strictly enforce physical distancing and other health measures, she said.

Fixed fees for drivers and operators would also remove the hazards attached to the current system where drivers try to earn as much as they could to pay the daily “boundary” fee and have some left over for their own needs, she added.

“To protect [the] commuters, [the] government should coordinate with [the] transport sector to expand, not limit, our public transport options in the weeks to come,” she said.

Minority Leader Franklin Drilon blamed poor planning for the commuters’ ordeal and said the government showed a lack of foresight and insensitivity to the plight of the poor.

“It cannot go on like this. If we are to revive the economy, then we have to make sure [the] workers get to their work without compromising their health and that of others,” Drilon said.

He called on employers to help their own workers get to work and commended the police and the military for deploying their vehicles to ferry stranded commuters.

Sen. Joel Villanueva lamented that in reopening the economy, officials forgot to take care of the welfare of the commuting workers.

“[The] economy has been the prime consideration in the decision to relax quarantine restriction[s], but sadly, it appears we forgot about the mobility of [the] workers in our desire to jump-start recovery,” Villanueva said.

He called on transportation officials to make adjustments to their plans.

Transportation Secretary Arthur Tugade rejected the criticism that there was lack of planning in the resumption of public transportation, citing his department’s demolishing medians on Edsa to build loading and unloading spots for buses that would carry commuters who would choose slower rides over waiting for hours in the queues at metro stations.

Tugade defended the ban on jeepneys, saying the government observed a “hierarchy of transport modalities” depending on the physical distancing involved.

“Why are jeepneys at the bottom of the hierarchy? The health and safety components are there, the difficulty of social distancing, and roadworthiness,” he said.

But if the jeepneys could show that they could implement public health measures and that they are roadworthy, then they would be allowed to run again, he said.

Tugade appealed for public patience, giving assurance that improvements toward “long-term mobility” were on the way.