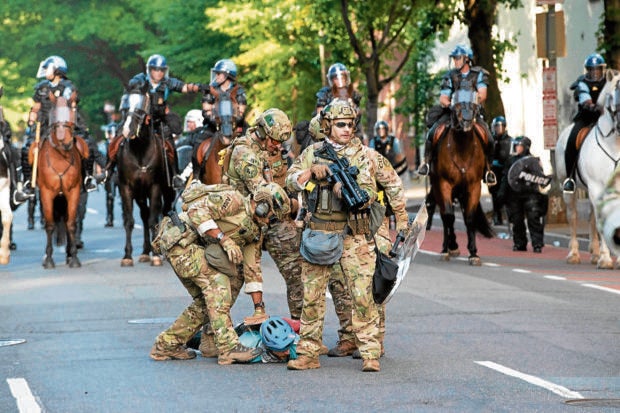 Military police officers are restraining a protestor near the White House on June 1, 2020 as demonstrations against George Floyd’s death continue. – Police fired tear gas outside the White House late Sunday as anti-racism protestors again took to the streets to voice fury at police brutality, and major US cities were put under curfew to suppress rioting.With the Trump administration branding instigators of six nights of rioting as domestic terrorists, there were more confrontations between protestors and police and fresh outbreaks of looting. Local US leaders appealed to citizens to give constructive outlet to their rage over the death of an unarmed black man in Minneapolis, while night-time curfews were imposed in cities including Washington, Los Angeles and Houston. (Photo by ROBERTO SCHMIDT / AFP)

WASHINGTON — President Donald Trump’s warning that he would deploy the United States military to any state that refuses to take aggressive action against rioting rests on a long-standing presidential power that gives wide latitude to the White House, legal experts said Monday.

But a decision to do so would be met with likely legal opposition, and strong opposition from governors seeing it as an overreaction.

“If a city or state refuses to take the actions that are necessary to defend the life and property of their residents, then I will deploy the United States military and quickly solve the problem for them,” Trump said during a Rose Garden address as cities across the country grappled with property destruction, looting and violent police clashes in the week since the death of George Floyd in Minneapolis. (See related story in World, Page A11.)

Legal experts say the president does indeed have the authority under the Insurrection Act of 1807 to dispatch the military in states that are unable to put down an insurrection or are defying federal law.

In the last half-century, presidents have sent the military to Southern states to ensure desegregation of schools there in the 1950s and 1960s, and to Los Angeles after the California governor sought federal help during the 1992 riots.

Even so, the president’s comments set up an immediate conflict with officials in some states, who disputed that the president had unilateral authority to send in troops against their will.

“The president of the United States is not a dictator, and President Trump does not and will not dominate New York state,” New York Attorney General Letitia James said in a statement Monday, adding that the state was prepared to go to court if need be.

The American Civil Liberties Union (Aclu) said it would be unnecessary to invoke the Insurrection Act, and also irresponsible and dangerous.

Under the law, Trump would first have to proclaim that the insurgents disperse and retire peaceably within a certain amount of time. He could activate federal troops during an emergency without a governor’s request as long as specific conditions are met, such as if the violence is interfering with the execution of laws in that state.

Stephen Vladeck, a national security and constitutional law expert at the University of Texas at Austin, said on Twitter that the federal government does not necessarily need a state request before using troops for domestic law enforcement, and that the Insurrection Act is open-ended in letting the president decide when circumstances merited its use.

He said the Insurrection Act had not been used since 1992, partly because of the unpopularity of using troops for domestic purposes.

“And it’s hard to imagine courts second-guessing factual determinations by the president that circumstances warrant use of the military to restore order,” Vladeck wrote. “Instead, the real constraint today might be responsibility; if Trump invokes these statutes, he’d own all that follows.”

Not all experts are certain that the circumstances merit it.

Eugene Fidell, who teaches military justice at Yale Law School, said Monday that he does not believe Trump has the authority to send in troops without the governors’ permission in these circumstances.

“Absent a request from the legislature or the governor of a state, I think the only way the power can be lawfully exercised is if there were an impeding of federal authority,” he said, pointing to the example of Little Rock, Arkansas, when troops were sent in because the state was not abiding by a federal court order.

Enforcing law the way he wants

Kent Greenfield, a constitutional law professor at Boston College, said that what seems to distinguish this instance from many past ones—such as school desegregation clashes—is that there’s no allegation that states are refusing to enforce federal law.

TAGS: Donald Trump, US military, US protests vs racism