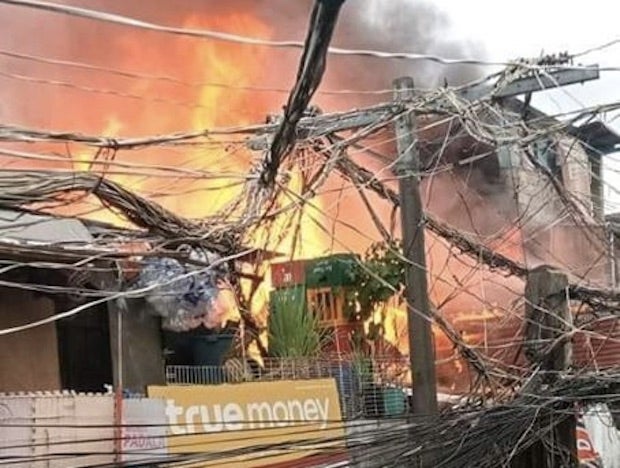 A general alarm was raised over a fire that spread on Monday, June, 1, 2020, in Barangay Addition Hills in Mandaluyong. (Photo from the Facebook page of Fire Alert Metro Manila)

MANILA, Philippines – The Bureau of Fire Protection raised a general alarm over a fire that was spreading through a residential area in Barangay Addition Hills in Mandaluyong City on Monday.

Officers from Mandaluyong’s BFP office at Maysilo Circle told INQUIRER.net that the declaration came at  8:50 p.m., as the blaze continued to run through residential areas in the said the Block 37 area of the barangay.

In a general alarm,  the highest under the BFP classification, all available firetrucks in Metro Manila are asked to respond to the fire.

Earlier, BFP said that the fire started around Monday afternoon, and a second alarm by 5:39 p.m. A few minutes after, at 5:50 p.m., it was raised to the fifth alarm.

People on social media posted photos of the fire, which also damaged several electrical posts.  A post from Fire Alert Metro Manila showed that fire raging near electric wirings from an old post.

ADVERTISEMENT
Read Next
Some services of the Office of the Ombudsman still unavailable under GCQ
EDITORS' PICK
Smart sweeps Opensignal’s Mobile Experience awards in Cebu
EuroMillions Superdraw: A lottery draw unlike any other is coming to the Philippines
MRT-3 eyes reducing number of trains after 127 personnel get infected
DOH: Remdesivir shows ‘positive effects’ on COVID-19 patients but not conclusive
Smart releases Hyun Bin’s second TVC
Over 15,000 prisoners freed to decongest BJMP jails amid pandemic—DILG
MOST READ
Army: Soldiers, not cops, in CCTV footage in aftermath of Sulu incident
Lawmakers hit ‘very unfair’ NTC orders vs ABS-CBN
Army loses track of 2 Jolo bombers after agents’ slay
Mayor Labella: ‘Business is hurting in Cebu City’
Don't miss out on the latest news and information.