CITY OF SAN FERNANDO, Pampanga, Philippines — The government is sticking to its “test-trace-treat,” or 3T strategy, to control the spread of the coronavirus that causes the severe respiratory disease COVID-19 while reducing the damage to the economy.

But testing to confirm infection will not cover even half of almost 110 million Filipinos, said Vince Dizon, the deputy chief implementer of the government’s response against COVID-19.

“Mass testing is a very wrong and very dangerous way of describing what we must do,” said the 46-year-old management expert who leads the COVID-19 testing effort. 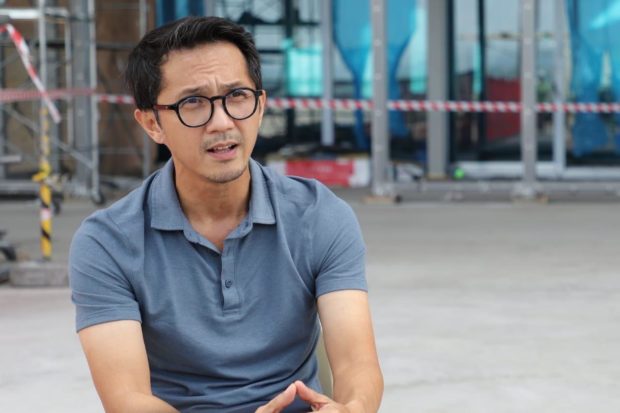 The appointment of the youthful and energetic official who brims with ideas is seen as a fresh whiff of hope for a successful campaign against COVID-19.

Dizon also serves as presidential adviser for flagship projects, and president and chief executive officer of the Bases Conversion and Development Authority (BCDA).

His first order of business in his new job was to make four “mega swabbing sites” operational in the first week of May. These are the Philippine Arena in Bulacan, SM Mall of Asia Arena in Pasay City, Enderun Tent in Taguig City and Palacio de Manila in Malate in Manila.

From the start, Dizon said the government had adhered to a Department of Health (DOH) policy of “expanded testing.” In memorandums issued by the DOH, expanded testing is defined as “testing all individuals who are at risk of contracting COVID-19 infection.”

“Nobody in the world will do [mass testing] or has done this simply because you don’t have to,” Dizon said.

“The way to attack COVID-19 is to really approach it in a targeted way,” said the former economics professor who holds a master’s degree in applied development studies from the University of Reading in the United Kingdom.

During a hearing on May 19, he told senators that the government was targeting to test at least 2 million Filipinos, or about 2 percent of the population.

Citing the global shortage of testing kits and the limitation of local capacity for making tests, the DOH prioritized two subgroups to test.

In Subgroup A are patients or health-care workers with severe or critical symptoms, relevant history of travel and contact with infected persons. Those with mild symptoms will be in Subgroup B.

The DOH, Dizon said, would be revising the guidelines “very soon” to include other people working in health facilities as well as residents within and outside the epicenters of the outbreak.

Even expanded testing is difficult to do, Dizon said. In February, only the Research Institute for Tropical Medicine (RITM) and two hospitals were capable of conducting reverse transcription-polymerase chain reaction (RT-PCR) tests for SARS-CoV-2, the virus that causes COVID-19.

The number of laboratories able to do RT-PCR tests has climbed to 42, increasing the country’s testing capacity to 32,000 daily.

Actual tests have averaged 11,000 daily, which is less than half of of the testing capacity. “We are not happy with that,” Dizon said.

Dizon said the goal was to expand the network of laboratories in June to 66 so they could raise the capacity to 50,000 tests daily, the ideal testing capacity.

The next steps, he said, are to raise the efficiency of the labs and of the local governments in getting swab samples.

The testing laboratories will themselves be tested to their limits by an expected surge in the number of Filipinos returning home after losing their jobs overseas due to the pandemic’s impact on the global economy. An estimated 300,000 will be arriving in the coming weeks.

“Other countries don’t face this challenge [of thousands of workers returning from overseas],” Dizon said.

There is yet no talk of regulating the price of RT-PCR tests, which could be as much as P9,000 if done by private labs.

The maximum that the state-owned Philippine Health Insurance Corp. wants to pay for a test is P4,100. At this rate, testing 1 million, or about 1 percent of the population, could cost the government over P4 billion.

As for the number of beds reserved for people going into quarantine, it was zero on April 13. But by May 20, the isolation areas in Metro Manila and Luzon already had 5,000.

Private companies have been helpful, donating equipment and supporting many of the necessary works.

Dizon said the shifts in different forms of quarantine were done very slowly toward a “new normal” behavior expressed in the catchphrases “dahan-dahan” (carefully), “unti-unti” (gradually) and “hinay-hinay” (gently).

But the government needs to be “very aggressive” in the 3T strategy since it would entail infrastructure, Dizon said.

“Unfortunately, we’re lagging behind a bit,” he said, adding that there was urgency in setting up more quarantine facilities.

“We’re really in a hurry. It’s like a game of catchup. We really have to catch up for lost time,” he said.

Dizon said the war against COVID-19 is going to take 18 to 24 months until a vaccine is found.

“We have to be prepared for a long, protracted war. This is not going to end next week, next month or this year. It’s not. It is going to last until next year,” he said.

“We have to be ready for capacity to test,” he added, articulating an oft-repeated goal [set by] Secretary Carlito Galvez [Jr.], the chief implementer of the government response to COVID-19.

Dizon said the results of the tests could help save more lives and could be used to monitor the trend, deal with surges and quickly respond to these.

Battling COVID-19 is not the sole responsibility of the government, he said.

“We cannot do this alone,” Dizon said. “We need the private sector, which can mobilize faster than government.”

Dizon, who was born in Quezon City but whose roots are in Pampanga and Tarlac, earned a bachelor’s degree in economics and another in commerce at the De La Salle University where he served on the faculty as assistant professor of economics.

Dizon also worked as a senior lecturer in economics, finance and statistics at University of Northern Virginia, Prague campus.

Managing the building of New Clark City in Tarlac is not the toughest task that Dizon has tackled so far. Being at the front line in the fight against COVID-19 is.

It is the “most difficult job that I have ever experienced in my lifetime,” he admitted.