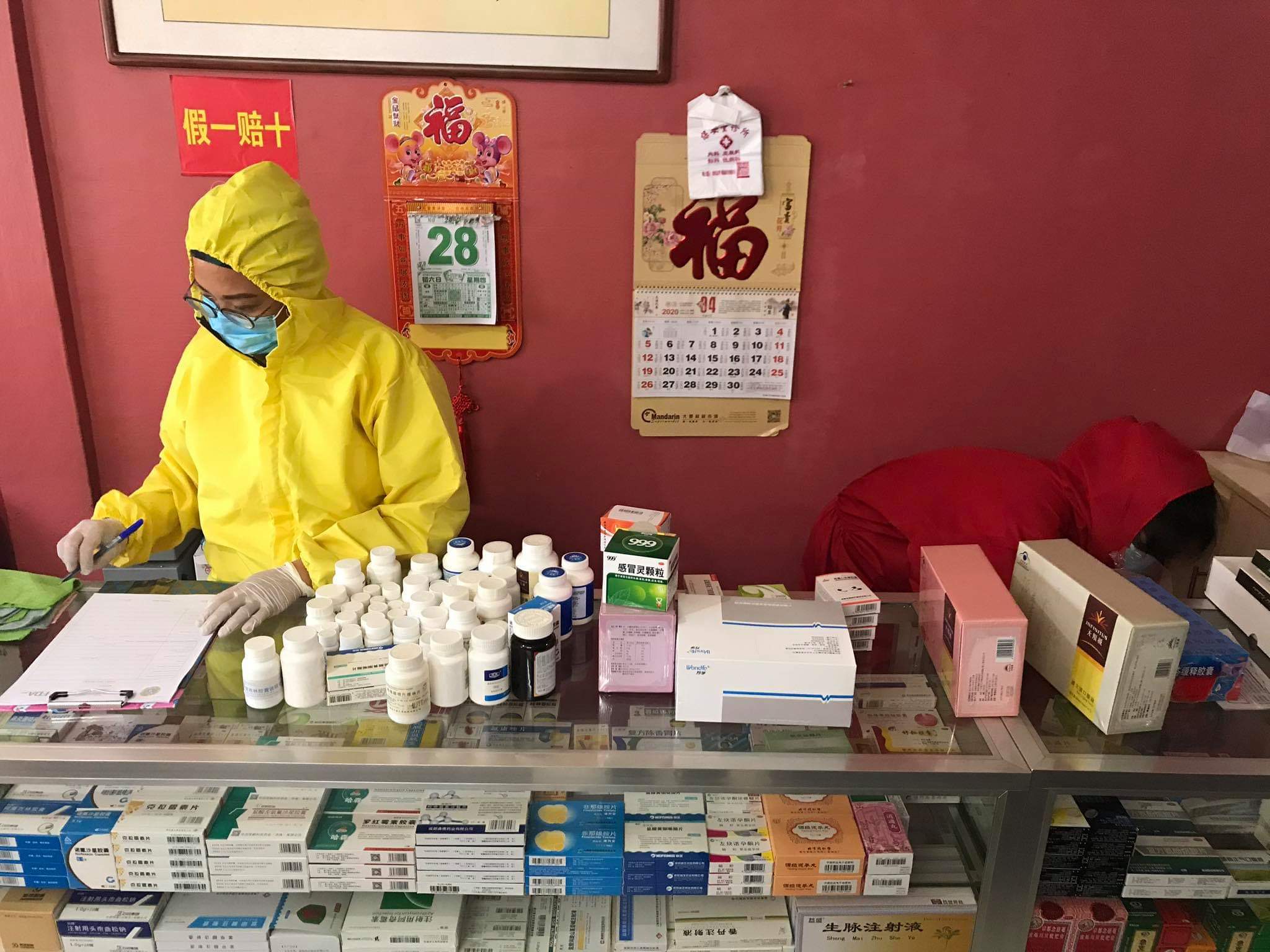 INVENTORY Food and Drug Administration (FDA) personnel make a record of the seized COVID-19 testing kits and Chinese-labeled medicines found inside an underground drugstore and clinic at Barangay Anunas, Angeles City. The Chinese-run clinic was raided on Thursday by agents of the National Bureau of Investigation, the local police and an FDA team. —PHOTO FROM ANGELES CITY INFORMATION OFFICE

CITY OF SAN FERNANDO—Two Chinese were arrested on Thursday following a raid on a pharmacy and a medical clinic in Angeles City, Pampanga province, by the police, agents of the National Bureau of Investigation and the Food and Drug Administration (FDA).

Chen Hai Fang and Chen Zhen Zhong remained at an NBI detention facility in the city after the raid on the Bao An Tang drugstore and the three-bed clinic at Barangay Anunas in Angeles City where some of the medicines being sold included those that could supposedly treat the new coronavirus disease (COVID-19).

The drugstore had been selling Chinese-labeled medicines and supplies for over a year to Chinese and Filipino customers, according to lawyer Marvin de Jemil, NBI Central Luzon executive officer. The clinic reportedly catered exclusively to Chinese.

Some of the recovered items included Chinese-labeled testing kits for COVID-19, based on an inventory conducted by the FDA raiding team.

The detained Chinese admitted to owning the establishments but they “could not present professional licenses or any local permit,” Angeles City Mayor Carmelo Lazatin Jr. told the Inquirer by telephone on Friday.

“I cannot tell if a Bureau of Internal Revenue (BIR) certificate displayed on a wall [at the drugstore] is genuine,” he added.

Last week, Lazatin ordered the closure of two hotels in Angeles for allowing two Chinese men to check in, which violated the enhanced community quarantine guidelines enforced by the Inter-Agency Task Force on Emerging Infectious Diseases.

The clinic in Angeles was the second clandestine medical facility operated by Chinese nationals, which sold medicines to “treat” COVID-19, that was raided by authorities.

On May 19, the FDA and the police’s Criminal Investigation and Detection Group raided a clandestine hospital at a posh residential village in Clark Freeport Zone, also in Pampanga province.

The hospital was outfitted with seven hospital beds and a pharmacy. It catered to 490 Chinese employees of a firm supporting the operation of an offshore gaming company inside the Fontana Leisure Parks and Casino, a water park and casino situated at the Clark Freeport Zone in Mabalacat town in Pampanga. Two Chinese suspects had been freed without charges.

The nearby Angeles City hosts about 12,000 South Koreans and less than 1,000 Chinese before the Luzon quarantine.

In Isabela province, police on Thursday arrested five foreign nationals and a Filipino who yielded boxes of cigarettes labeled with fake brands in Naguilian town.

Xlu Zou Wu, 42, a Korean trader of Santiago City, and his Filipino driver were arrested when the police found 649 sacks and boxes of assorted cigarettes inside his truck.

The cigarettes were hidden in rice chaffs inside the vehicle that was stopped at a checkpoint. The truck was bound for a rice mill, where two more Koreans and two Chinese were arrested, said Police Col. James Cipriano, Isabela police director. —TONETTE OREJAS AND VILLAMOR VISAYA JR.