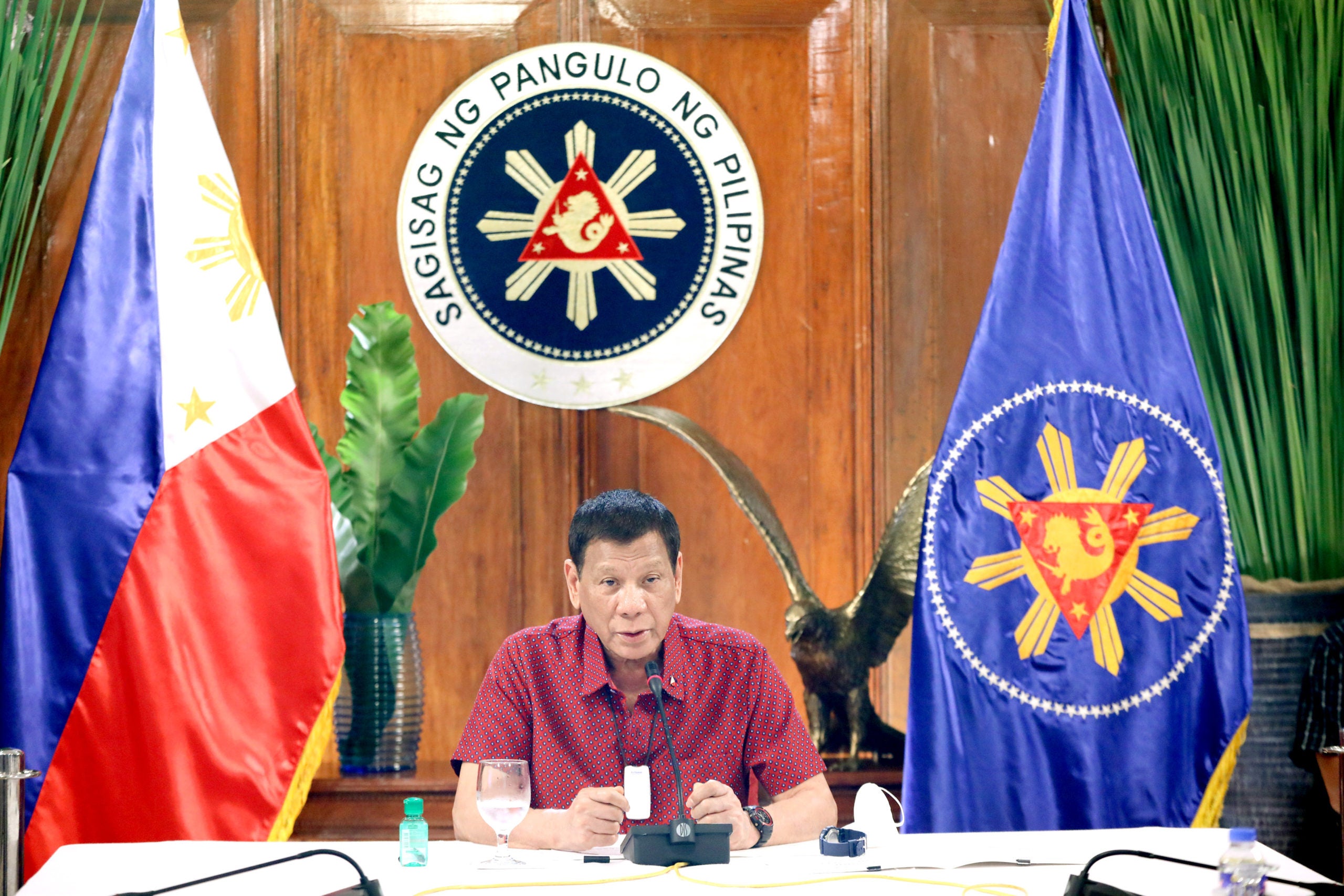 President Rodrigo Roa Duterte updates the nation on the government’s efforts in addressing the coronavirus disease (COVID-19) at the Malago Clubhouse in Malacañang on May 28, 2020. ACE MORANDANTE/PRESIDENTIAL PHOTO

President Rodrigo Duterte on Thursday night announced the further easing of the coronavirus quarantine in Metro Manila, one of the toughest and longest in the world, to allow more movement and business reopenings in a phased return to economic activity and recovery.

Metro Manila’s 17 mayors had recommended the shift to general community quarantine from the stricter modified enhanced community quarantine imposed on the metropolis and other areas at high risk for infection with the new coronavirus on May 16 after one and a half months of lockdown.

The Inter-Agency Task Force on Emerging Infectious Diseases, the temporary government body overseeing the Duterte administration’s response to the coronavirus pandemic, recommended the easing to Mr. Duterte, who approved it after a meeting with the panel on Thursday night. The shift will take effect on June 1.

The Metro Manila quarantine will this weekend surpass the 76-day isolation of Wuhan, the city in central China where the new coronavirus that causes the severe respiratory disease COVID-19 first emerged late last year and had since spread throughout the world, sickening more than 5.7 million people and killing over 354,000 of them.

The easing could help to reduce damage to an economy that unexpectedly shrank 0.2 percent in the first quarter and is expected to fare worse in the second quarter.

The task force recommended the easing to Mr. Duterte despite daily infections this week topping 300, with the Department of Health (DOH) warning of further increases as it ramped up validation of accumulated positive test results.

Presidential spokesperson Harry Roque on Thursday also warned that infections would continue to rise until a vaccine for COVID-19 became available.

Earlier on Thursday, the DOH reported 539 new coronavirus infections, the highest daily increase since the 538 recorded on March 31, raising the total to 15,588. The bulk of the new cases, 330 or 61 percent, were recorded in Metro Manila.

The task force recommended the easing of the Metro Manila quarantine to allow more businesses and public transport to resume operations in a limited capacity.

With restrictions on movement loosened, more people would be able to go out and return to their jobs or buy essentials and access services.

But minors and senior citizens remain barred from leaving their homes, except to go to work or buy necessities.

The task force also recommended the easing of the lockdown in Cebu City to “modified enhanced community quarantine.”

The downgrade saved Cebu City workers from having to test for the new coronavirus as a requirement for going back to work. But a spokesperson for the city government said employers would still be encouraged to test their employees for safety.

Under the more relaxed rules that will be in place in Metro Manila from June 1, local officials can still place communities deemed as high risk under lockdown.

Gatherings of up to 10 people will be allowed, workplaces, shops and some public transportation will reopen and movement in and out of the capital will be permitted.

Until two weeks ago, Metro Manila’s quarantine measures were among the world’s toughest, on a par with those of Wuhan and stricter than curbs at the peak of contagion in Italy and in Spain, where a combined 484,000 people were infected, of whom 60,000 died.

In a television interview on Thursday, Interior Secretary Eduardo Año said the task force had been unable to resolve the questions of public transport and grooming shops.

Año said the task force was still debating how beauty salons and barbershops could be allowed to reopen.

“But we assure our barbershop and [beauty] salon workers that they will be allowed [to go back to work] very soon. We just need to ensure safety and the trade secretary (Ramon Lopez) and [COVID-19 task force chief implementer Carlito] Galvez are making the rounds and looking into health [standards in] the shops,” Año said.

As for public transport, he said the task force had yet to decide which means of conveyance to allow. He said the Department of Transportation would conduct a dry run this weekend, but did not give details.

Under general community quarantine, he said, buses are allowed to run but at 50 percent capacity only under strict public health measures.

Taxis and tricycles are also allowed but with only one passenger.

There was talk in recent days of allowing metro trains to run on limited capacity and strict physical distancing rules.

Año said jeepneys, the backbone of public transportation in the metropolis, were out of the question. He suggested that jeepneys be repurposed for delivery service.

He also suggested that employers introduce staggered work hours to ease up on the use of public transport. He encouraged people to use bicycles, which he described as “very safe and economical,” but did not say whether these were safe for people to use in riding to their jobs across the metropolis under heavy rain and through flash floods during the rainy season.

Lt. Gen. Guillermo Eleazar, commander of the Joint Task Force COVID, said the public should get used to checkpoints and curfews as these would remain until a vaccine for the coronavirus disease became available.

“This is not about restraining their rights. This is all about ensuring the protection of everybody from coronavirus,” Eleazar said. —WITH REPORTS FROM TINA G. SANTOS, JEANNETTE I. ANDRADE AND NESTLE SEMILLA