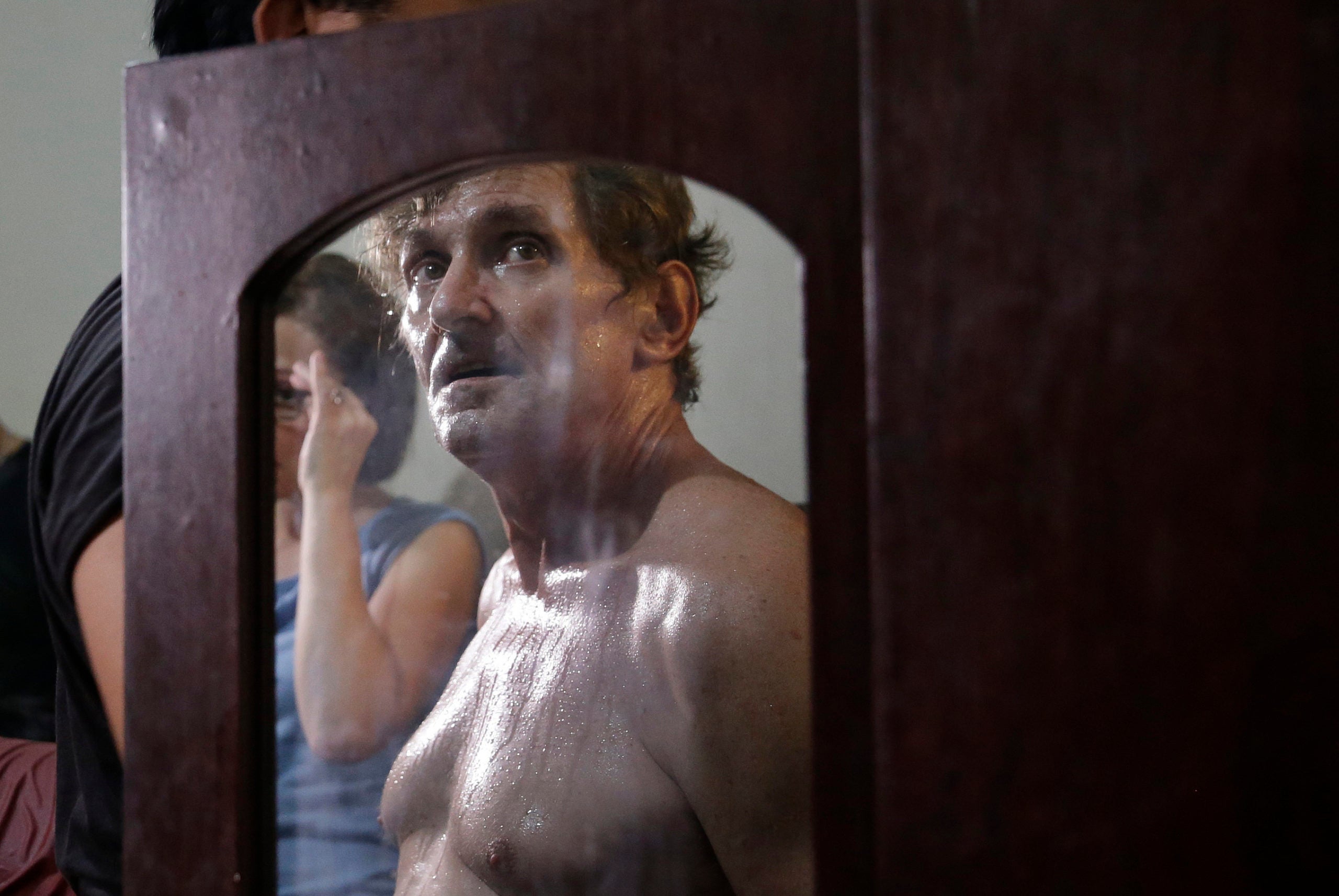 In this April 20, 2017 photo, suspected American child webcam cybersex operator, David Timothy Deakin, is reflected in a mirror as investigators gather evidence during a raid at his home in Mabalacat City, Pampanga.  (AP)

MANILA, Philippines — A Philippine court has sentenced an American to life in prison on charges of sexually exploiting Filipino children using webcams to sell videos, photos and livestreams to buyers abroad, an official said Wednesday.

National Bureau of Investigation official Janet Francisco said the conviction of David Timothy Deakin is a strong warning to offenders that “they could not hide even if they commit sexual exploitation crimes in cyberspace because law enforcers are collaborating worldwide to catch them.”

Judge Irineo Pangilinan Jr. of the regional trial court in Pampanga province declared Deakin guilty of qualified human trafficking and sentenced him to life imprisonment and ordered him to pay a fine and indemnify his victims. The ruling was handed down online Tuesday because of coronavirus quarantine restrictions.

The U.S. Federal Bureau of Investigation provided the information that led to Deakin’s arrest in April 2017 in Pampanga’s Mabalacat City, Francisco said. Associated Press journalists were allowed to witness the raid on Deakin’s apartment near a red-light district and his arrest.

Francisco, who heads an anti-human trafficking force, said the raid led to the seizure of the largest amount of digital evidence related to online sexual exploitation of children in the country so far. Her agents also found children’s underwear, toddler shoes, cameras, bondage cuffs, fetish ropes, meth pipes and stacks of hard drives and photo albums in Deakin’s two-bedroom apartment.

Deakin was originally from Peoria, Illinois, and has been in the Philippines since 2000. He told the AP in an interview shortly after his arrest that he didn’t make videos of children.

The Washington, D.C.-based private group International Justice Mission said its social workers have helped bring eight of Deakin’s victims to recovery and cited one as welcoming his conviction “because he won’t be able to victimize anyone anymore.”

Samson Inocencio Jr., who heads the IJM in the Philippines, said the justice system should continue protecting vulnerable children who are unsafe during the coronavirus lockdown.

A study released by the group last week said the Philippines has emerged as a global hot spot for online child sexual exploitation, with cases increasing sharply in recent years. Parents have agreed to have their own children victimized for the money.

The webcam scheme involves pedophiles in the U.S., Canada, Europe and Australia who pay facilitators to sexually abuse children, even babies, in the privacy of Philippine homes. They watch and help direct the abuses through online livestreaming services.

The wide use of English, availability of internet connections and international cash transfer systems have combined with long-entrenched poverty and wide access to vulnerable children to allow many abuses to happen in the Philippines.