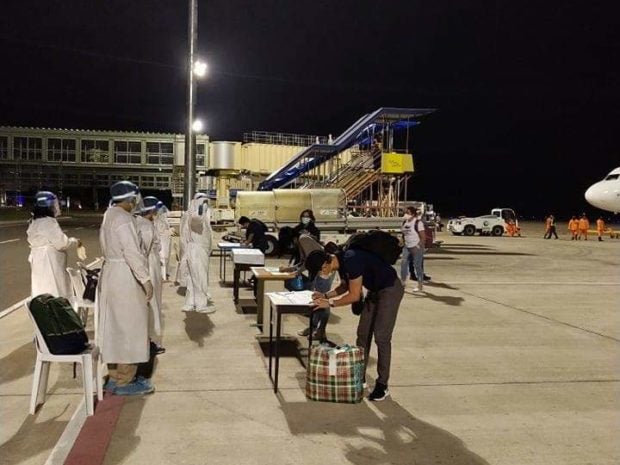 After they disembarked from the plane, they underwent profiling.

Some of them already stayed for two months in quarantine centers in Manila and Batangas City.

The Overseas Workers Welfare Administration (OWWA) facilitated the return of the OFWs in the first sweeper flight from Manila to Bohol.

“Finally, I’m back in Bohol. I am very happy,” said 27-year-old Doxson Tinaja Asoy, an aircraft technician in Singapore who arrived in Manila last April 20 and was then quarantined in a resort in Batangas City.

He said he was already quarantined in Singapore for 20 days and was given a health clearance before he arrived in Manila.

Asoy said he wanted to return to Bohol to be with his wife Marie Karen Joy and three children – the youngest being a 1-year-old boy.

He said he was saddened that some of his fellow Boholanos already judged returning OFWs as carriers of COVID-19.

“We are willing to follow the protocols (to ensure the safety of my family and the community),” he told the Inquirer in a phone interview.

Asoy and the other OFWs have to comply with local health protocols, which include another 14-day quarantine in a resort before they can return to their respective families.