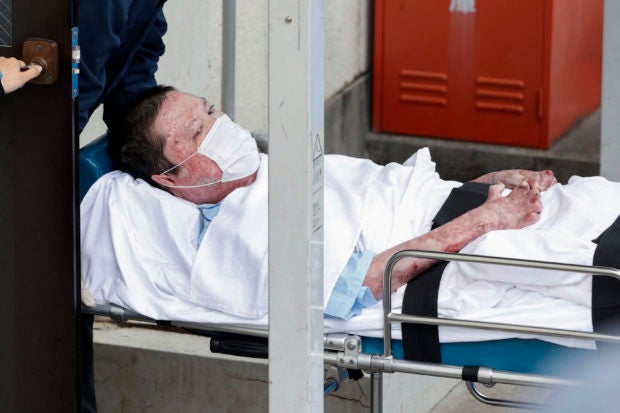 Shinji Aoba on a stretcher is carried to Fushimi police station after being arrested in Kyoto, western Japan, Wednesday, May 27, 2020. Japanese police arrested the suspect in a deadly arson at Kyoto Animation’s No. 1 studio on July 18, 2019 after the alleged attacker regained enough strength from his own injury to respond to a police investigation. Aoba is accused of storming into the studio, setting it on fire, and killing 36 people. Wednesday’s arrest comes 10 months after the police obtained permission from a local court as they had to wait for Aoba, who had suffered severe burns and was in a critical condition. (Suo Takekuma/Kyodo News via AP)

TOKYO — Japanese police on Wednesday arrested a suspect in the deadly arson at a Kyoto anime studio in 2019 after he recovered enough from his own severe burns to respond to the police investigation.

Kyoto police said they arrested Shinji Aoba, 42, on murder and arson allegations, 10 months after obtaining the warrant because they had to wait for Aoba to recover. Police also reportedly waited to arrest him until Japan’s coronavirus emergency was fully lifted this week.

Aoba is accused of storming into Kyoto Animation’s No. 1 studio on July 18, 2019, setting it on fire and killing 36 people, and injuring more than 30 others. The attack shocked Japan and drew an outpouring of grief from anime fans worldwide.

Police, quoting witnesses to the attack, have alleged Aoba arrived carrying two containers of flammable liquid, entered the studio’s unlocked front door, dumped the liquid, and set it afire with a lighter.

About 70 people were working inside the studio in southern Kyoto, Japan’s ancient capital, at the time of the attack.

One of the survivors, an animator, told Japanese media he jumped from a window of the three-story building gasping for air amid scorching heat after seeing “a black mushroom cloud” rising from downstairs.

Many others tried but failed to escape to the roof, fire officials said. Many died of carbon monoxide poisoning.

Aoba sustained severe burns on his face, torso, and limbs and was unconscious for weeks. He reportedly still cannot walk or feed himself without assistance. Police were to pursue their investigation while carefully monitoring his health.

“We will now focus on the suspect’s interrogation and pursue our investigation in order to fully examine the crime,” police investigator Toshiyuki Kawase told reporters. 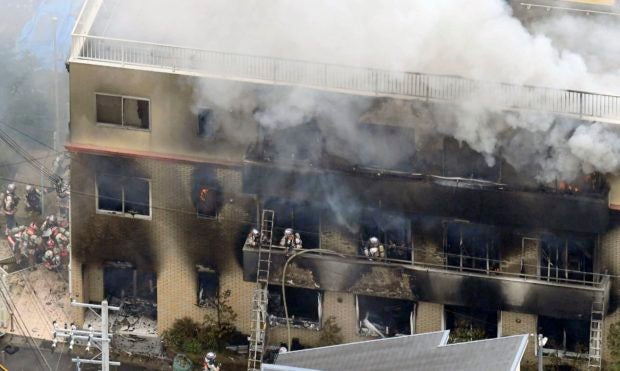 In this July 18, 2019, file photo, firefighters respond to a building fire of Kyoto Animation’s No. 1 studio, in Kyoto, western Japan. Japanese police arrested on Wednesday, May 27, 2020, 42-year-old Shinji Aoba, the suspect in a deadly arson at the animation studio after the alleged attacker regained enough strength from his own injury to respond to a police investigation. Aoba is accused of storming into the studio, setting it on fire, and killing 36 people. (Kyodo News via AP)

Japanese television footage showed Aoba, his face scarred and eyebrows lost apparently from the fire, strapped to a stretcher as he was carried into a police station.

Police have said Aoba told them he set the fire because he thought “(Kyoto Animation) stole novels.” He told investigators Monday that he thought he could kill many people with gasoline, Japanese media reports said.

Prosecutors are expected to seek formal criminal charges against him in a few weeks.

Kyoto Animation’s hits include “Lucky Star” of 2008, “K-On!” in 2011, and “Haruhi Suzumiya” in 2009. Its new feature film, “Violet Evergarden,” about a woman who professionally writes letters for clients, was scheduled to open in April but was postponed due to the coronavirus pandemic.

The fire was Japan’s deadliest since 2001 when a blaze in Tokyo’s Kabukicho entertainment district killed 44 people in the country’s worst known case of arson in modern times.