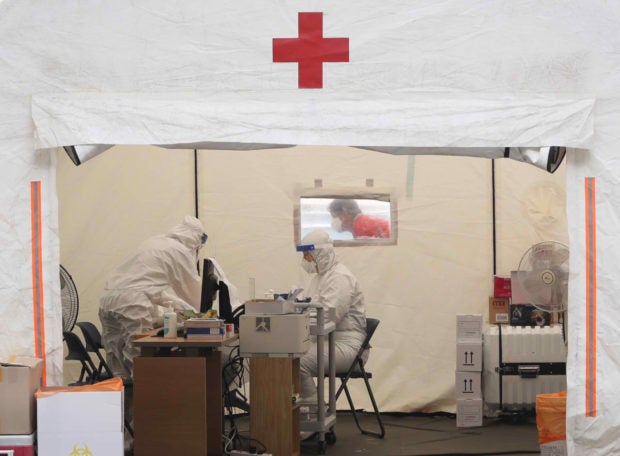 SEOUL — South Korea’s new virus cases spiked by the most in nearly two months on Wednesday as the country grapples with a steady rise in club-linked transmission and yet another cluster infection looms.

The country reported 40 new cases, including 37 local infections, raising the total coronavirus caseload to 11,265, according to the Korea Centers for Disease Control and Prevention (KCDC).

The daily new virus cases marks the largest in 49 days.

South Korea was on the verge of fully controlling the COVID-19 pandemic on the back of its extensive testing regime and strict social distancing, without a comprehensive lockdown, with the daily increase falling to as low as just two cases three weeks ago.

But new group infections from a popular nightlife district in Seoul splashed cold water on the fight.

Itaewon emerged as a new hotbed for the spread of COVID-19 after a 29-year-old man tested positive for the virus on May 6 following his visits to multiple clubs and bars.

As of Wednesday, a total of 257 cases have been linked to Itaewon clubs.

Health authorities have been on alert as the Itaewon cluster is leading to other sporadic transmission across the country, including at a logistics center in Bucheon, west of Seoul.

At least 36 cases have been traced to e-commerce operator Coupang’s logistics center as of 9:00 a.m., and more related cases are likely to follow, according to city government and health authorities.

Health authorities are conducting COVID-19 tests on all 3,600 workers at the center.

Should the daily number of new infections bounce back to above 50, the country may have to consider imposing tougher social-distancing scheme, which was lifted earlier this month. The last time the figure surpassed the threshold was April 8.

The country reported no new additional virus-linked deaths, keeping the death toll at 269.

The fatality rate came to 2.39 percent, and no deaths were reported from patients aged 29 and below.

The total number of people released from quarantine after making full recoveries came to 10,295, up 20 from the previous day, according to the KCDC. More than 90 percent of the patients have recovered.

The country added three more imported infections, raising the number of such cases to 1,221.

South Korea has started to re-open schools in phases, with some 440,000 high school seniors returning to classrooms after more than two months of delay.

A handful of schools, however, were forced to again shut down as students were tested positive of the virus. On Wednesday, students of some grades of middle and elementary schools, as well as kindergartners, will take in-person classes.

Schools will be fully normalized by June 8, but that may be delayed if cluster infections are not brought under control. Some 450 schools already have decided to delay their normal routine.

Health authorities rolled out a new guideline for citizens for the summer, which advised people to open windows every two hours when they use air conditioners. Tourists at beaches are also requested to maintain at least 2-meter distances as well. Yonhap