YANGON, Myanmar — Satellite imagery that shows a village burning in a conflict zone in western Myanmar lends credence to reports that houses were set ablaze there by government soldiers, a major human rights group said Tuesday.

Human Rights Watch said in a statement that an investigation is necessary to determine who was responsible for setting at least 200 buildings on fire on May 16 in the village of Let Kar in Rakhine state’s Mrauk-U township.

The burning of villages was a tactic used on a large scale by the military in Rakhine in 2017, according to investigations carried out separately by the United Nations and human rights groups. The tactic was used at the time against villages housing civilians from the Muslim Rohingya minority community. 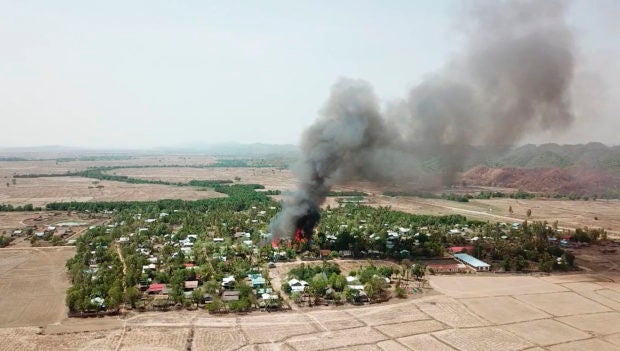 In this photo released by the Myanmar Army, a fire burns May 16, 2020, in the predominantly ethnic Rakhine village of Let Kar in Rakhine State’s Mrauk-U township, western Myanmar. The Rakhine areas since January last year has been the scene of bitter armed conflict between the government and the Arakan Army, a guerrilla force of the Rakhine ethnic minority seeking greater autonomy for the state. (Myanmar Army via AP)

Since January last year, Rakhine has been the scene of an increasingly fierce armed conflict between the government and the Arakan Army, a guerrilla force of the Rakhine ethnic minority seeking greater autonomy for the state. The government recently officially declared the Arakan Army a terrorist organization.

Online media sympathetic to the Rakhine cause blame Myanmar’s military for setting the fires in Let Kar, while the military has blamed the guerrillas. Access to the area by qualified independent observers is discouraged. Human Rights Watch said most of the village’s residents abandoned the area over a year ago when fighting increased.

Human Rights Watch said that a satellite photo taken on the morning of May 16 shows no signs of damage in Let Kar, but that remote imaging by an environmental satellite detected extensive fires burning there in the afternoon. It estimated that at least 200 buildings were burned, and said the imagery was consistent with accounts provided by witnesses on the ground.

A villager contacted by phone told The Associated Press that soldiers opened fire with heavy weapons at the village’s entrance, and soon afterward fires broke out in the center and southern parts of the village as gunfire continued.

“They left Let Kar at around 4:30 pm. When they left, the whole village was burning. They were inside the village for more than two hours,” said the villager, a 39-year-old man who asked not to be named because he feared for his safety.

The military’s version of the incident, issued May 17, said its soldiers had entered the village on patrol and were attacked by the Arakan Army. Its statement blamed the guerrillas for setting the fires before retreating. The military also released photos of the burning village, including several evidently taken by a drone, that it said backed its version of events.

“The burning of Let Kar village has all the hallmarks of Myanmar military arson on Rohingya villages in recent years,” said Phil Robertson, deputy Asia director for Human Rights Watch. “A credible and impartial investigation is urgently needed to find out what happened, punish those responsible, and provide compensation to villagers harmed.”

The military claimed it was carrying out counterinsurgency operations against Rohingya insurgents in 2017, but critics charge they were employing a campaign of terror to drive the Rohingya out of the country. An estimated 740,000 Rohingya fled to neighboring Bangladesh, where they remain in refugee camps.