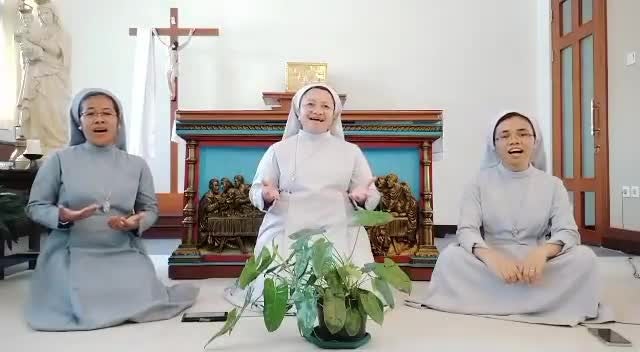 A screenshot of a video that has gone viral shows sisters M. Eufrasia, Vincentine and Dorothea of the Congregation of the Daughters of Our Lady of the Sacred Hears singing “Selamat Lebaran”, wishing Indonesian Muslims a Happy Idul Fitri 2020. (Youtube/Hidup TV)

Titled “The Beauty of Living With Tolerance”, the video was initially uploaded on Saturday to the YouTube channel of Catholic television station Hidup TV and shows sisters M. Eufrasia, Vincentine and Dorothea of the Congregation of the Daughters of Our Lady of the Sacred Heart singing “Selamat Lebaran”.

“After fasting for one month, giving alms according to religious teachings”, the trio sings. “Now we celebrate Eid’l Fitr happily, let us celebrate Lebaran joyfully.”

Several users shared the video on messaging apps and posted it to their Twitter accounts on Sunday, where it drew praise from netizens.

Thank you for your respect, sisters,” Twitter user @uki_ade3 wrote. “How beautiful it is to live side by side and honor each other.”

“This video makes me want to buy the sisters a bucket of opor ayam,” @assassinoftitan tweeted, referring to a dish of braised chicken in coconut milk that is traditionally served on Eid’l Fitr.

Central Java Governor Ganjar Pranowo also reposted the video to his official Instagram account. “[Your] voices are beautiful,” he wrote in the caption. “Thank you.”

Many commenters said that the video was a breath of fresh air after incidents that indicated growing religious intolerance in the country over the past few months. These included several regions halting the construction of churches in response to protests from local residents, as well as the vandalization of a Muslim meeting hall in a predominantly Christian area of North Sulawesi.

President Joko “Jokowi” Widodo called for firm action to uphold religious freedoms in Indonesia while adding that this responsibility fell to regional administrations.