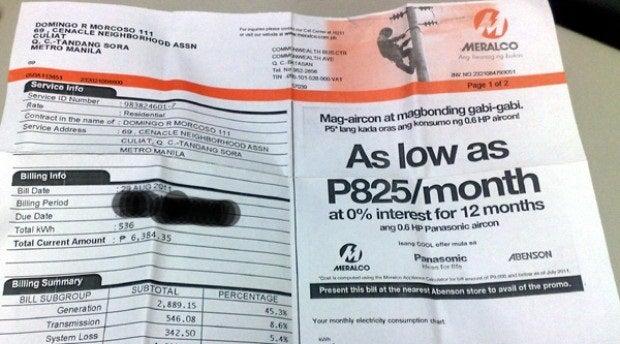 MANILA, Philippines — Senators Sherwin Gatchalian and Grace Poe on Monday urged major power distributor Meralco to be accurate and transparent in issuing electric bills after several consumers complained of a sudden increase in power charges amid the ongoing quarantine.

In a statement on Monday, Poe, chair of the Senate committee on public services, said the public relies on Meralco’s commitment to issue detailed electricity bills reflecting actual consumption, which she said is “the only credible basis for the charges consumers pay.”

“The public should not be made to shell out lump-sum payments for unjust estimates or conjectures. The electricity bill should be accurate, fair, and clear,” she said.

“No lights in homes should go off for those who have yet to receive Meralco’s promised bill clearly specifying charges and installment dues,” she added.

Meanwhile, Gatchalian, chairman of the Senate committee on energy, urged Meralco to come up with a separate bill that is “more transparent and will be very clear to consumers.”

The senator then asked the power distributor company to come out with a separate sheet specifying overestimates and underestimates in the electricity bills.

In a separate statement on Monday, he also urged the Energy Regulatory Commission (ERC) to issue a new advisory that will instruct not only Meralco but all other distribution utilities to unbundle the exact rates that were charged to consumers during the quarantine period.

“Talagang malaki ang pagkukulang ng Meralco pagdating sa transparency (Meralco really is lacking in terms of transparency). I totally agree to that because of this extraordinary computation. We need a separate bill to explain it properly. Hindi lang lalabas na isang bagsakan (It should not be released in one instance). Can we apply it to all utilities para hindi na magulat ang ating mga kababayan sa ibang lugar (so that our countrymen in other places will not be shocked)?” said Gatchalian.

Meralco, in a radio interview on Monday, announced it will issue another bill based on actual reading which will cover the months of March, April, and May when quarantine was imposed as a measure against the coronavirus pandemic.