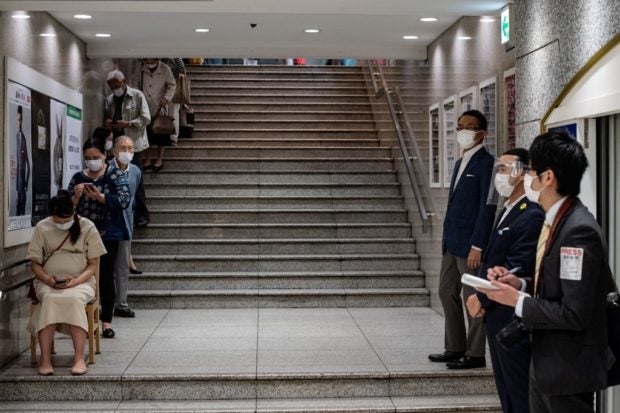 Staff members (R) in face guards and masks stand by as customers line up to enter Matsuya department store as its basement food section reopens after being closed due to COVID-19 coronavirus restrictions in Tokyo on May 25, 2020. Japan’s prime minister was expected later on May 25 to lift the state of emergency in the Tokyo region, after last week lifting it for the region around Osaka and Kyoto. Photo by Philip FONG / AFP

TOKYO — Japan was poised to lift its nationwide state of emergency over the coronavirus on Monday, gradually reopening the world’s third-biggest economy after new cases slowed to a crawl.

Compared to hard-hit areas in Europe, the United States, Russia and Brazil, Japan has been spared the worst of the pandemic, with 16,581 cases in total and 830 deaths.

Yet with infections threatening to run out of control, Prime Minister Shinzo Abe declared an initial state of emergency for Tokyo and six other regions on April 7 — later expanding it to cover the entire country.

Businesses and schools were urged to shut and people were requested to remain home but Japan’s “lockdown” was far softer than in other parts of the world and there was no punishment for anyone flouting the rules.

Citizens largely heeded the orders, with most of Tokyo’s famously packed streets falling quiet, and the number of new infections has fallen from a peak of around 700 per day to just a few dozen nationally.

There does not appear to be one single reason why the pandemic has hit Japan less hard than other comparable countries, and trying to pinpoint possible causes has become a favorite sport on social media.

High levels of hygiene and general health, removing shoes indoors, widespread masks, bowing as a greeting rather than shaking hands or kissing: all have been advanced as possible reasons but analysts agree there has been no silver bullet.

Japan has come under fire for a relatively low level of testing with around 270,000 carried out, the lowest per capita rate in the group of seven advanced economies, according to Worldometer.

But Japanese authorities insist that mass testing was never their strategy, as cases remained low enough to rely on aggressive contact tracing to contain clusters.

Nevertheless, testing has been ramped up in recent weeks as authorities warn of a possible next wave of the virus that could overwhelm their previous strategy.

Medical facilities are also being boosted after horror stories of coronavirus victims being unable to find a suitable hospital bed — mainly for administrative reasons as only certain establishments are designated to deal with the virus.

Although the human toll has been less severe than in other parts of the world, the economy — already struggling from the effects of natural disasters and a consumption tax hike — has suffered.

The world’s third-largest economy has plunged into its first recession since 2015, data published last week showed, shrinking by 0.9 percent in the first quarter.

With economic activity slowing to a crawl, the specter of deflation is looming again, with consumer prices in March logging their first drop in more than three years.

Coronavirus has also taken its toll politically, with polls showing support for Abe falling rapidly — a recent survey for the Asahi Shimbun suggested backing had dropped to 29 percent — the lowest since he took office in 2012.

He performed a rare u-turn on the cash handouts — initially announcing an entirely different policy — and is seen to have bungled another signature move involving the distribution of two masks per household, which attracted widespread mockery.