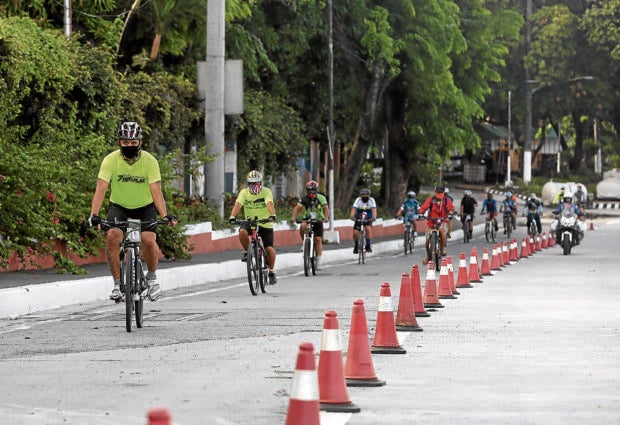 NEW NORMAL Transport coalition Edsa Evolution is optimistic that the government will include active transport like bikes and scooters in its post coronavirus planning. —NIÑO JESUS ORBETA

MANILA, Philippines — For seven years, Ricky de Vera, 55, has been making his way around Metro Manila on his trusty mountain bike. While mostly enjoyable, his road trips are also fraught with peril as he jockeys for space amid a sea of vehicles.

So De Vera was delighted when a 1.3-kilometer cycling lane was set up on Sunday morning from White Plains to Bonny Serano along EDSA.

“This is such a good initiative,” he told the Inquirer. “We hope this will continue in the future, so people don’t have to be scared about biking in Manila.”

He added that the initiative was timely as the public transport ban due to the new coronavirus disease has led to a growing wave of Filipinos embracing walking, cycling and scootering to get around.

But by noon, the Metropolitan Manila Development Authority (MMDA) had ordered the closure of the bike lane, supposedly part of a “trial run” to assess whether bicycles could be part of the “new normal.”

It initially told the organizing cycling group, transport coalition Edsa Evolution, that it had “underestimated demand.”

“Rest assured, however, that the agency has concrete plans regarding bike lanes. But it needs time for discussions, planning and correct implementation because what we want are ‘protected’ bike lanes,” she added. Still, Edsa Evolution members said they were optimistic government officials would start including cycling and walking in their post coronavirus planning.

“It’s still a successful run,” said Edsa Evolution spokesperson Keisha Mayuga. “[A dry run] for half a day planned within four days is still a win.”

But promoting active transport — expanding pedestrian sidewalks and establishing right-of-way, among others — would take immense political will.

Even now, cycling groups and the MMDA disagree on how best to create bike lanes on congested roads like Edsa.

Advocates believe traffic cones and barriers, coupled with strong enforcement, are a good first step; the MMDA believes there must be a steel barrier between bikers and motor vehicles.

Still, commuter advocates are greatly encouraged by the Department of Transportation’s reception to active transport during and after the coronavirus pandemic.

For De Vera, such commitments mean taking the small first steps — “like making sure the roads themselves are free of obstacles or holes and are safe in general.”

“There’s still a lot to be done,” he said. “But if this continues, then a lot of people would eventually be encouraged to bike more.”