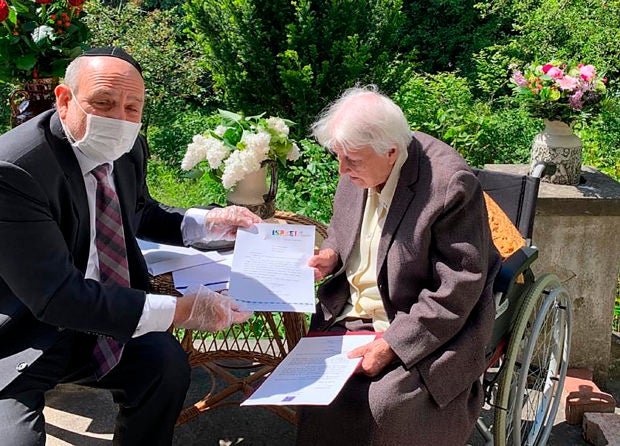 The presidents of Israel and Poland have sent birthday greetings to a 101-year-old Polish woman who is believed to be the be oldest living person recognized by Yad Vashem for rescuing Jews during the Holocaust.

Reuven Rivlin of Israel and Andrzej Duda of Poland praised Anna Kozminska in separate letters for her courage in risking her own life to help Jews during the German occupation of Poland.

Rivlin expressed admiration and gratitude “for your courageous acts of humanity and bravery during the dark days of the Second World War in Poland.” In his letter, Duda said he would bestow Kozminska with a special state medal.

The letters were delivered to her on her birthday Friday by Poland’s chief rabbi, Michael Schudrich, and the niece of a boy saved during the war by Kozminska and her step-mother, Maria Kozminska.

They wore masks and sat with her on her porch outside her Warsaw home due to the coronavirus pandemic.

Schudrich said that Kozminska expressed surprise at receiving letters from the presidents.

Anna and Maria Kozminska took in 8-year-old Abraham Jablonski in 1942 and sheltered him for three years. They also helped rescue three other Jews.

Russia says it scales down war games amid pandemic